In our daily life, two fundamental wave phenomena, reflection and refraction, are naturally observed at an interface separating different homogenous media, which are interpreted by the well-known Snell’s law.

This work has been published in Nature, see go.nature.com/2OE964e

In our daily life, two fundamental wave phenomena, reflection and refraction, are naturally observed at an interface separating different homogenous media, which are interpreted by the well-known Snell’s law. Specifically, the refraction (referred to as positive refraction now) emerges in an opposite side of the interfacial normal with respect to the incidence. The negative refraction, which occurs in the same side of the interfacial normal, has been discovered in 2000 for electromagnetic metamaterials with negative refraction indices, after a gorgeous prophecy postulated by Veslago in 1967. After that, the negative refraction became one of the major driving forces to advance the whole field of metamaterials. In my early research career, one of the projects was to find a phononic crystal with refraction index exactly minus one, which is critical to form a high resolution image through a flat lens made of such an artificial structure.

Recently, Weyl crystals, featuring with doubly linear degeneracy in three-dimensional momentum space, have become a hot topic in the field of topological matter. In additional to the tantalizing bulk properties that manifest the chiral anomaly, the nontrivial band topology endows the Weyl semimetals with appealing surface states hosted by sample boundaries. Remarkably enough, the surface band dispersion at Fermi energy can form open arcs connecting the projected Weyl points of opposite topological charges. One may ask a question: is there any intriguing phenomenon that strikingly differs from those observed in conventional crystals with closed constant energy (frequency) loops?

In this work, we link the two topics together. We report a discovery of negative refraction of the topological surface arc states in Weyl crystals, realized for airborne sound in a novel woodpile phononic crystal. Our near-field experiments confirm evidently the theoretical predictions based on our scheme. Markedly, this novel phenomenon is counterintuitive in two aspects: the refraction beam is deflected into an anomalous direction, and the unwanted reflection is completely forbidden. The former is attained by delicately designing the surface terminations of the Weyl phononic crystal, and the latter inherently originates from the recently emerging topological Weyl physics. Specifically, such appealing interfacial phenomena can even be realized in a single Weyl phononic crystal with delicately designed surface terminations, whose interfaces are the one-dimensional edges shared by two adjacent facets.

Our proposed scheme can be directly extended to realize a wide variety of exceptional interfacial sound responses, such as focusing and imaging without any reflection. Similar phenomena should also be observable in other Weyl systems (photonics, electronics, etc.) and thereby offer unprecedented possibilities for controlling waves. This work will not only advance the current knowledge on interfacial acoustics but also enrich the Weyl physics in condensed matter systems (e.g., indicating a new direction of “Fermi arc engineering”), thereby providing a new paradigm of exotic phenomena arising from band topology. 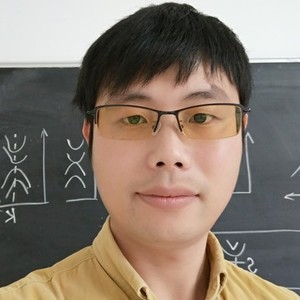 Dr. Qiu is currently a Professor in the Department of Physics, Wuhan University. He received a B.S. in 2002 in Wuhan University and a Ph.D. at the Hong Kong University of Science and Technology. His current research interest is to find novel acoustic phenomena in artificial structures. He proposed the concept of valley degree of freedoms for acoustics, and presented the first topological valley transport in the acoustic platform.
Follow