How to form single or multiple pathways through random, interconnected nanowire networks.

Networks are all around us, from information networks such as the internet to the physical networks of roadways to the highly interconnected biological networks in the brain. How do these networks connect, how do they pass information, and how is this information stored? In a road network, the information can be thought of as the cars, their movement is controlled by the junctions and the memory of the routes taken dictated by the driver . Similarly, in the brain, the junctions between the neurons are called synapses and they control the communication between different brain systems which are distributed throughout the brain. This means that when you are performing a task you are not just using one isolated portion of your brain, but instead utilizing many different areas, which are often quite far apart but linked through the brain's network. Unlike a roadway, the brain's electrical signals flow through this network in preferred pathways, which adds a memory component, and ultimately allows you to recall or better perform a specific set of cognitive or motor tasks.

To understand pathway formation, we investigated another highly interconnected and disordered system, where the memory element is also controlled by the strength of the junction connection, a nanowire network. Nanowires are like normal electrical wires but extremely small, less than 100 nanometres in diameter, this is a hundred thousand times smaller than a millimetre, a thousand times thinner than a human hair, and 40-100 times thinner than a neuron. Just like normal wires, nanowires can be made from a variety of different materials and typically have surface coatings either from their growth process or an engineered coating to stop them clumping together in solution. Where one nanowire is in contact with another nanowire a junction is formed, and the behaviour of the network is dominated by the response of the junctions. The junctions can be broken down by heat or chemical treatment, or strengthened by repeated electrical stimulus. Nanowire networks are highly transparent and flexible, allowing them to be integrated into the next generation of electronic devices. (The nanowires used in this study were synthesized by S. Biswas in Prof. Holmes’ Materials Chemistry and Analysis Group, University College Cork, and P. Flowers from B. J. Wiley’s Lab in Duke University).

While investigating a single nanowire junction between two Ag nanowires Dr. A.T Bellew discovered that the conductance (strength) of the junction scaled to a power-law with the amount of current (charge) passed through the nanoscale junction. We continued to pass electrical signals through a range of single junctions and a network of junctions and found that they all scale with a power law behaviour, with various materials scaling with exponents less than or greater than 1. Through a combination of experimental and simulation work we found that a network of these junctions reacts to larger and larger electrical currents in a similar way to a single junction, this is called self-similar scaling, which means that it is exactly or approximately similar to a part of itself and this kind of property can be found throughout nature. Most surprisingly was that nanowire networks composed of specific materials showed a conductance plateau, a memory state which corresponded to the formation of single pathway through the network which was only possible when junction exponents were larger than 1. Exponents less than 1 naturally lead to multiple pathway formation. The path formation dynamics was confirmed through simulation by Dr. C.G daRocha, C. O. Callaghan and Prof. M. S. Ferreira.

Below is a video which shows single pathway formation in a network of nanowires, where the junction exponent is larger than one.

When the exponent is less than one, multiple pathways form at the same time.

Essentially the activation of the network is like a race, with each junction competing for the preferred pathway. If the junction exponent is larger than one, the network is selective and a single pathway will form and strengthen as charges flow down the pathway of least resistance, alternative pathways only activate when the main pathway is fully strengthened. If the exponent of the junction is less than one, the pathway is determined by the topology of the network and multiple pathways can form simultaneously with no clear single preferred pathway and no memory-state conductance plateaus.

In the manuscript, we show this behaviour is an emergent property of any junction-dominated network. A particular class of junctions, where the scaling exponent is greater than 1 naturally leads to the emergence of a “winner-takes-all” electrically conducting path that spans the entire network, which we show corresponds to a memory state formed through the lowest-energy connectivity path. Collectively, these results point to a capacity to self-select the lowest energy connectivity pathway within a complex random network, one that is robust and immune to perturbations. We may have the possibility of independently addressing memory or conductance states in complex systems and this is expected to have important implications for computers which will operate in a more brain-like fashion.

These findings will help in the development of novel hardware neural network systems with brain-inspired architectures for cognitive signal-processing, decision-making systems and ultimately neuromorphic computing applications. Neuromorphic computers are a new class of computers which work fundamentally different to the processors and memory we currently use and will outperform conventional computers at tasks that are natural to our brain such as ultra-fast sensory processing, high-level pattern recognition, and motor control. This is important if we want to have self-driving cars, true artificial intelligence, or recognize a chihuahua from a muffin (image recognition)

The next goal is to understand how to engineer this single or multipath behaviour in other systems, and to develop logic platforms based on these nanowire network materials for cognitive signal-processing, decision-making systems and ultimately neuromorphic computing applications. 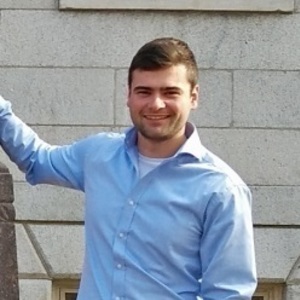 Dr. Hugh G. Manning B.A (mod) AMRSC, is a post doctoral researcher in Prof. John J. Boland’s nanowire research group which operates in the Advanced Materials + BioEngineering Research Centre (AMBER) and the Centre for Research on Adaptive Nanostructures and Nanodevices (CRANN); one of the largest research institutes in Trinity College Dublin and Ireland's leading nanoscience institute. His research interests include connectivity at a nano and macro scale, characterization of nanowires and nanowire networks, for use as transparent conductors, resistive switching memories, reservoir computing and neuromorphic applications. Hugh is passionate for science education and outreach, he was an educator for Physics at Trinity Walton Club, a not-for-profit STEM Education program. As well as research he aids in developing and delivering educational outreach programs in CRANN and AMBER.