Our paper, "Observation of topological phenomena in a programmable lattice of 1,800 qubits", represents an exciting step forward in quantum simulation.

Our Nature paper is available here: "Observation of topological phenomena in a programmable lattice of 1,800 qubits"

D-Wave quantum annealing processors were originally designed to implement quantum annealing in the transverse field Ising model (TFIM). This approach exploits quantum phenomena to solve a classical optimization problem. But what if we used these processors to simulate quantum systems instead? Our demonstration of such a simulation, which we describe in our letter to Nature, is an important (but nonuniversal) step towards Richard Feynman's vision of a programmable and universal quantum simulator.  The work complements a study recently published in Science: "Phase transitions in a programmable quantum spin glass simulator".

The system we simulated is a geometrically frustrated quantum magnet, analogous to the triangular antiferromagnetic lattice in the TFIM. With the appropriate combination of quantum and thermal fluctuations this system undergoes a topological phase transition; Kosterlitz and Thouless were awarded the 2016 Nobel Prize for the discovery of this transition. We used a D-Wave 2000Q annealing quantum computer to simulate this phenomenon, which appears in many systems including superfluid and superconducting thin films, but has never been observed in the two-dimensional TFIM. The pictured lattice shows spin-spin correlations and cylindrical boundary conditions in the system we simulated.

We simulated a geometrically frustrated lattice with cylindrical boundary conditions by programming the D-Wave 2000Q processor with the appropriate coupling terms on 1,800 of the 2,048 available superconducting flux qubits.  Each Ising spin state maps to a "pseudospin field"; in spite of the up/down symmetry of the Ising spin, competing quantum and thermal fluctuations lead to a Kosterlitz-Thouless phase transition governed by vortices and antivortices in the pseudospin field.


Like all research at D-Wave, this paper relied on a diverse team of interdisciplinary contributors from top to bottom (partially pictured in the lab at D-Wave HQ). On a foundation of superconducting circuit design, fabrication, cryogenics, calibration, modeling, and an extensive software stack, the experiment started with Juan Carrasquilla saying, “Maybe we can use the new annealing controls to simulate a frustrated quantum magnet.”

The research team, partially pictured, formed a full-stack effort, from fabrication to algorithms.

A research team at D-Wave had just simulated quantum spin glasses in the three-dimensional TFIM (Harris et al., Science 165) and Mauricio Reis had just announced the successful calibration of a perfectly-yielded processor that was beautifully suited for our experiment. The building blocks for the project came together at just the right moment. All we had to do was make it work.

With much poking and prodding, and with many lessons learned, we eventually made it work. The end result is a demonstration of topological phenomena in a piece of programmable quantum matter, showing remarkable quantitative agreement with conventional simulations. This high-fidelity control over a lattice of 1,800 qubits is one step towards a future where researchers use programmable quantum simulators to study the properties of new materials. 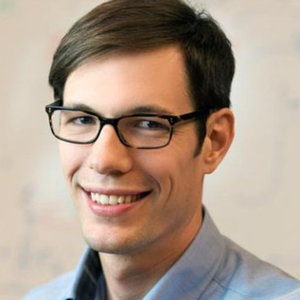