Isaac Asimov once famously wrote that the most exciting phrase to hear in science is not “Eureka!” but “That’s funny…” This project has started with a bit of a “that’s funny…” moment when we performed two seemingly identical experiments in Australia and in Russia, and we yielded the opposite results. Our first explanation was that, geographically speaking, from an Australian perspective some things in Russia are made upside down. This commonplace joke has turned out to be literally the explanation of our experiments. It became clear that we witnessed an example of nonlinear nonreciprocity at the nanoscale.

We have been studying topological states of light – peculiar localisations of light that are unusually robust against various perturbations. Being inspired by the recent developments in condensed matter physics, photonic topological states have emerged as a new frontier in optics. Our research was headed towards new horizons in topological optics by introducing strong nonlinear effects in a topological structure. More specifically, we were generating a third-harmonic signal from localised topological edge states of a one-dimensional zigzag array of silicon nanoresonators known to have the Z2 topological invariant.

Together with Alexander Shorokhov we performed our first set of measurements at the Australian National University and observed the predicted effect: a strong third-harmonic signal from the localised mode associated with topological state (as schematically shown in the left part of Fig. 1). Alexander then continued the experiment at the Moscow State University, where an opposite effect was observed. We were cross-checking the experimental arrangements and procedures for a possible fault in one of the experiments, and found that the only difference was the direction of propagation of light in the two experiments: light was propagating through the structure from top to bottom in Australia and from bottom to top in Russia. From there we understood that we hit the regime of strong optical nonreciprocity induced by nonlinear interactions.

In the resulting Nature Nanotechnology paper, we demonstrate the nonlinear generation of photons inside a nanoscale topological structure where nonlinearity triggers nonreciprocal response.  We reveal that the interplay between topology and nonlinearity makes the third-harmonic generation and light localisation at the edge states dependent on the direction of the optical pump. In addition, we observe that the topological properties enhance substantially the efficiency of the nonlinear effects.

We believe this work will establish valuable cross-disciplinary links and set an important reference point for future studies of topological photonic structures. 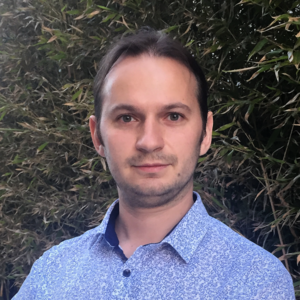