Elastic conductive composites are generally composed of the elastic insulating substrate and conductive fillers. They have both the high electrical conductivity from the fillers and the deformability from the elastomer, and therefore are wildly used in the field of soft electronics and smart devices. However, the conductive fillers in the matrix will separate from each other during stretching, resulting in a significant decrease of electrical conductivity. In essence, most elastic composites exhibit a negative piezoconductive effect. Elastic composites exhibiting a positive piezoconductive property are still significant underexplored.

Surprisingly, our team (Led by Dr. Shiyang Tang and Prof. Weihua Li in School of Mechanical, Materials, Mechatronic and Biomedical Engineering at University of Wollongong) discovered a conductive elastomer named liquid metal-filled magnetorheological elastomer (LMMRE) that gets much more electrically conductive as it is elongated. Such a composite comprises a hybrid of fillers of soft eutectic gallium-indium (EGaIn) liquid metal microdroplets combined with solid metallic magnetic microparticles, and unlike previous studies, this material has a stunning property whereby its resistance reaches a maximum value in the relaxed state but drops dramatically under any mechanical deformation, including compression, stretching, bending, and twisting. We discovered that the resistance of the LMMRE can be reduced by seven orders of magnitude under a small tensile strain of 10%, exhibiting a significant positive piezoconductive effect. We showed that such a property can enable the composite to be used as strain sensors with a high sensitivity.

To understand the mechanism behind this unique property, we found that the Poisson's ratio of this composite is extremely close to 0.5. This indicates that the volume of this elastomer is constant upon stretching, and the concentration of the electrical contact between the rigid spherical particles will not change as it is elongated. This property should maintain the stability of electrical conductivity during deformation. However, our experimental and simulation results show that the EGaIn liquid metal microdroplets within the composite can deform along with the matrix during elongation, but the rigid magnetic particles do not. Due to the constant volume, the LMMRE will always be compressed in a certain direction upon any mechanical deformation. Consequently, the rigid magnetic particle may squeeze the surrounding insulating elastomer matrix and liquid metal microdroplets, leading to a sharp reduction in the thickness of the insulating layer between them, and even enable additional solid particles to be in direct contact with the liquid metal droplets. We believe this effect would provide more conductive paths to reduce the overall resistivity of the composite during stretching.

In addition, our research team further investigated the magnetic ﬁeld-responsive and thermal properties of the composite; we also demonstrated several applications such as a pressure-sensitive smart heating device using the LMMRE ﬁlm. The flexible LMMRE film can automatically adjust the heating temperature by sensing the surface pressure. It can be cut into any shape and work on a curved surface, and therefore may be used for making ﬂexible and wearable devices with a simple fabrication process. Due to the unique positive piezoconductive effect and excellent mechanical and thermal properties, we believe this LMMRE has broad application prospects in the fields of sensors, software robots and wearable devices. 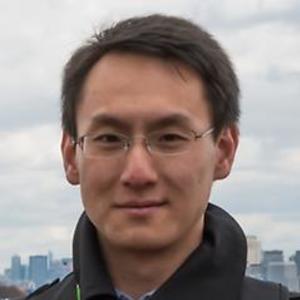