Lightsaber is a coherent stream of photons for physicists in the lab. We are making efforts to create a coherent beam of atoms by collimating them along the same direction using micro fabricated microcapillaries on a silicon chip. Such a Gen 2 atomsaber is not for making a more powerful weapon, but for making exquisitely sensitive atomic sensors. Image credit: Ella Maru studio

The video featuring David Pritchard at MIT about his atom interferometer first shaped my understanding of an atomic sensor. From there, I realized that to make such a device so exquisitely sensitive to inertial forces, I need a coherent source of atoms. It means that atoms are traveling along the same direction and sharing the same speed when they escape from the exit. In this work done at Raman Lab, we achieved a very high degree of control of the direction of the atom beam, in other words, a highly collimated output.  We called it the “cascaded” collimator, a step towards achieving coherent atom optics on a chip.

Atoms are tiny. Their radius is about one hundred-thousandth that of human hair. Manipulating these tiny particles is like playing badminton outdoor at Amarillo, Texas (the windiest city in the U.S.). The smallness of an atom (the mass of a rubidium atom is about 1e-23 of an apple) makes it extremely sensitive to external fields, since any type of force will influence its trajectory significantly. Therefore, they are promising candidates for making world-class gravimeters, magnetometers and gyroscopes.

How to make an atom source? Here is a 3-step recipe: 1) put some rubidium into a box; 2) open a hole on the surface of the box; 3) heat it up under a vacuum. This forms the most fundamental version of an effusive oven. When atoms come out from the hole, they will randomly go towards all directions. Recall the trajectories of a crowd coming out from a stadium when they finished watching a basketball game.

How to regulate the output to form a beam? In the traditional way one attaches a long tube to the hole. Once a chaotic group of atoms enters the tube, a large number of them will collide with the tube walls (see black dots on tube surfaces in the figure below). After many cycles of diffusive bouncing, they will either go back into the box or exit from the tube end, going towards random directions. However, there is always a tiny fraction of atoms that are clear about their goals from the starting point. They enter the tube, run on-axis and leave the tube without hitting any surfaces. Such an axial beam is the workhorse for an atom interferometer while those outliers are mainly nuisances.

Figure 1: Molflow+ simulations showing atoms exiting the collimator and hitting a target plane. The left shows the performance of a traditional design. The right shows the output of the cascaded collimator is much more collimated than the traditional type. Black dots on tube show atoms colliding with the wall surfaces. Image credit: Nature Communications 10, Article number: 1831 (2019)

What’s new in our research? One way of understanding the novelty is that we created openings--doors and windows along the hallway before the exit of the stadium--through which the outliers can easily escape before they arrive at the exit, while the on-axis travelers don’t get disturbed at all. Another way of thinking about this: one tube can collimate the output to a certain degree. Now, we create multiple stages of tubes that are naturally sequence-aligned, and each stage of tubes can further enhance the collimation effects, efficiently filtering co-propagating outliers from the on-axis beam.  A proper alignment of each stage with the previous one would not be possible without using photolithography and silicon microfabrication techniques.

As a fake-physicist bad at programming, I spent much time looking for well-established packages serving my research purposes. Fortunately, I found the dedicated package developed by R. Kersevan and M. Ady at CERN. The Monte Carlo simulations very well support our idea on making a miniaturized cascaded collimator. With this, we were able to convince two talented researchers Jeremy and Anosh at Dr. Ayazi’s group to fabricate some test samples for us, which finally leads to the published results. As an outlook, we are planning to “close the loop”—recirculating atoms released from the gaps (see g1 & g2 in the above figure) for making Gen 3 atom saber with greater longevity. Heaters and temperature sensors could be integrated on chip as well as through MEMS engineering.

After long discussions at Tech Square on a Friday afternoon, we were able to come up with a simple but novel structure to release atoms emitted from gaps into free space--“let it go”. Even without recycling, we felt it would be a great demonstration of the basic cascading effect. This made use of existent silicon micromachining technology, to etch high aspect ratio trenches into a standard silicon wafer, followed by simply using a dicing blade to create cascades into the structure.

I had a pretty hard time while trying to theoretically fit the fluorescence spectrum. The optical pumping effect, the multi-level signature of an atom, and the near-source probing method makes a precise interpretation for the measured spectrum non-trivial. Master equation simulations are required to fully account for these effects. Although I could make many things work in the lab, I am dumb at coding. This time, I couldn’t find a nice package like Molflow+. Fortunately, a new sharp graduate student Xiao joined our group and finished the theory soon. I wrote on my lab notebook: the aspect ratio of our collimator is 30:1 (tube length over diameter), which is roughly about the ratio of coding speed for Xiao and Chao.

Videos show the lightsaber (along vertical direction) crosses two different atomsabers (along horizontal direction), generated by a single stage collimator and a cascaded collimator, while I manually scan the laser frequency. Without any scatter, the lightsaber (780 nm laser beam) is invisible to our camera; without any on-resonance illuminance, the atomsabers (rubidium atom beams) are also invisible to our camera. We can only see the cross-sword sparks while the laser frequency is on resonance. The cascaded collimator generates “sharper” atomsabers, namely better collimated atom beams. See Doppler effects explained in the paper. Video credit: Chao Li

A 5X3X1 mm cascaded collimator sitting on a penny. Atomic outliers can be released from the two opening trenches. Photo credit: Chao Li 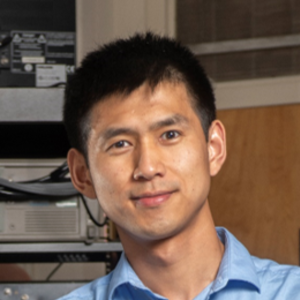