In our new paper, we discuss the ethical challenges of ingestible electronics sensors (IESs; also called “smart pills”) and examine the legal regulation of such sensors in the United States and Europe.

By Sara Gerke & I. Glenn Cohen

IESs are increasingly being developed for improving health outcomes. One such use could facilitate monitoring and promoting medication adherence. Once swallowed, an IES connects with a wearable sensor that can detect and record valuable data, including behavioral and physiological metrics or the time of drug intake. The wearable sensor subsequently sends the collected data to a computing device (e.g., a smartphone) that processes and displays the information. There is also the option to link the display function with a cloud database for data sharing with the patient’s doctor or family.

IESs have already been launched on the market in the United States and Europe, and more products are currently in the development pipeline. Examples include Proteus Discover, Abilify MyCite, Atmo Gas-Sensing Capsule, and an ingestible bacterial-electronic system, developed by researchers at MIT, that can detect gastrointestinal bleeding in vivo. IESs also hold promise for improving medication adherence to PrEP (i.e., a drug to prevent HIV transmission) and for the treatment of drug-resistant tuberculosis.

IESs are promising for improving clinical outcomes, but they also raise ethical challenges that stakeholders, especially the makers of such sensors, must remain attuned to. For example, since the use of these sensors is at least initially unfamiliar to patients, it is especially vital to respect the patients’ autonomy by ensuring full and voluntary informed consent. The use of a smartphone app as part of the system also involves click-through user agreements that patients frequently do not read, and if they read them often have problems understanding them. An additional challenge is that these user agreements will be frequently updated.

The legal classification of IESs, and thus the relevant pathway for bringing IESs to market in the United States and Europe, needs to be assessed on a case-by-case basis. There are two types of IESs: those that are co-ingested with medicine and those that are taken as an embedded part of a drug.

Wearable sensors, including IESs used independent of medication, are classified as medical devices in the United States and Europe. For example, the wearable sensor, including the IES, from Proteus Digital Health has been CE-marked (i.e., a necessary condition to place a medical device on the European market) as a Class IIa medical device in Europe since 2010. The United States Food and Drug Administration (FDA) classified the device through the De Novo classification process into Class II and permitted marketing in 2012.

In contrast, a drug product that is physically embedded with an IES such as Abilify MyCite is a drug-device combination product in the United States. Marketing application for such product usually depends on its primary mode of action. Abilify MyCite, for instance, has a drug primary mode of action. Thus, a New Drug Application approval was needed to market Abilify MyCite, which Otsuka Pharmaceutical received by FDA in 2017. In Europe, however, these drug-device “combination products” are classified as medicinal products and their marketing within a Member State (e.g., Germany) typically requires authorization of that Member State’s competent authorities.

In our paper, we also explore new legal developments in the United States and Europe, such as FDA’s recently proposed framework for regulating prescription drug-use-related software, the new EU Medical Device Regulation as well as the new EU General Data Protection Regulation and its impact on United States companies.

The research for this contribution was supported by a Novo Nordisk Foundation-grant for a scientifically independent Collaborative Research Programme in Biomedical Innovation Law (grant agreement number NNF17SA027784). 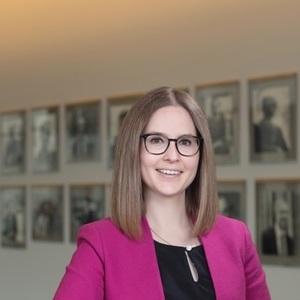 Sara Gerke is the Research Fellow in Medicine, Artificial Intelligence, and Law, at the Petrie-Flom Center for Health Law Policy, Biotechnology, and Bioethics at Harvard Law School. She oversees the day-to-day work of the Project on Precision Medicine, Artificial Intelligence, and the Law (PMAIL), including conducting law, policy, and ethics research; drafting reports and recommendations; and coordinating the Petrie-Flom Center's efforts with collaborators at the Center for Advanced Studies in Biomedical Innovation Law (CeBIL) at the University of Copenhagen as well as other partners.
Follow