We introduce a minimal conventional electronics circuit to implement a LIF neuron model. Our spiking neuron has only three active out-of-the-shelf components two CMOS transistors and one SCR (thyristor). The circuit-block can be used to build multilayer neural networks.

The ongoing explosion of activity in artificial intelligence does not need to be further emphasized these days, it is ubiquitous. This ongoing revolution has been driven by dramatic advances in both neural network theory and computer power. Examples of recent achievements are the computer code AlphaGo, which beat a world-class player of the board game Go, and the neuromorphic CMOS integrated circuit TrueNorth, which implements a million neurons. These developments are remarkable but also demonstrate some serious limitations for further progress. AlphaGo is a program that needs to be run in a supercomputer, requiring a rather large space and about 0.1 MW of power. On the other hand, TrueNorth can be considered as a dedicated digital computer optimized for the implementation of neural network algorithms. While its architecture departs from the von Neumann architecture paradigm and is inspired from the cortex of the brain, and hence is "neuromorphic", the circuit that implements each neuron is complex, requiring about ten thousand transistors. Thus to implement the 100 billion neurons of a brain this posses a significant challenge.

In this context, one may take an alternative route and try to implement a system where the ultimate goal would be "one device one neuron". In this case, we depart from the digital computer paradigm towards  "neuromorphic" analogic circuits. These are brain inspired circuits where electric spike signals are generated and propagated emulate the electric activity of biological neurons. Evidently a central unit of such a system is the artificial neuron. There is a large variety of neuron models, such as Hodgkin-Huxley, Izhikevich, LIF, etc, that present a trade-off between biological fidelity and circuit complexity.

These types of neuromorphic neuron silicon circuits typically require some tens of transistors for faithful realization of spiking neurons. Those aiming at simpler neuron models with a minimal number of devices are called "compact integrate and fire neuron circuits". In this context our work proposes an "ultra compact" circuit of a leaky-integrate-and-fire (LIF) neuron model. The number of active devices in our circuit is just 3, we adopt two transistors and a SCR (or thyristor). The proposal of a SCR is the key original aspect of our work. The key feature of the SCR, in contrast to transistors is the hysteresis in their I-V curves.

Our ultra-compact neuron circuit can be easily reproduced as it uses out-of-the-shelf electronic components readily available. However, there should not be any a priori issues to undertake a microelectronic or even a VLSI implementation. The figure shows a network of three ultra-compact spiking neurons as described in our work. 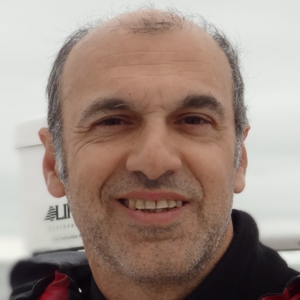