Soft porous crystals are nanostructured porous materials that can switch between different phases by external stimulation. Our mesoscale simulations explain how these transitions give rise to spontaneous phase coexistence that can be experimentally stabilized to yield spatially disordered materials.

"Crystals are like people, it is the defects in them which tend to make them interesting!" Whether having in mind the color and associated price of diamonds, the efficiency of semiconductor devices, or the mechanical stability of metals, defects and other types of spatial disorder fundamentally impact the properties of otherwise perfectly crystalline materials. While this has been acknowledged for a long time—the above quote of Sir Colin Humphreys dates back to 1979—the true impact of spatial disorder on the macroscopic behavior of nanomaterials is in many cases still poorly understood.

Dynamic spatial disorder: a mismatch in length and time scales

Characterizing spatial disorder in nanostructured materials is not straightforward, especially when the disorder is dynamic. Experimentally, one would need high-resolution techniques—both in terms of temporal and spatial resolution—to reveal the nanostructure of the material. Computationally, the opposite challenge arises: one would need access to increasing time and length scales as using too small a simulation cell would artificially suppress possible spatial disorder in the material.

The challenge to characterize dynamic spatial disorder in nanomaterials has long hampered a thorough understanding of soft porous crystals (SPCs), nanoporous materials that show large-amplitude morphological transitions between different phases when exposed to external stimuli such as temperature, pressure, or guest adsorption (see Fig. 1). Until recently, these dynamic phase transitions were assumed to occur cooperatively throughout the material. While this assumption seems far-fetched, especially when keeping in mind the growing experimental evidence of size-dependent flexibility in SPCs, disproving this idea would require us to go beyond the current computational and experimental limits.

To tackle this challenge, we systematically increased the size of various pillared-layered SPCs in our simulations, thereby gradually allowing for more disorder in the material. For SPC mesocells—with a critical dimension above 10 nm—we observe that phase transitions no longer occur cooperatively but spontaneously introduce spatial disorder in the material. During the phase transition, it is thermodynamically favorable for the SPC material not to exhibit a cooperatively deformed phase, but to exhibit phase coexistence (see Figs. 1 and 2). While phase coexistence introduces defects at the interface between the two phases, the associated energy penalty is compensated by the relaxation of the two separate phases.

Our simulations reveal that the observed phase coexistence is dynamic in nature and that the energy penalty to introduce interfacial defects between the two phases decreases with increasing crystallite size. As a result, these computational results put forward a possible explanation for the size-dependent flexibility of SPCs, as the larger energy penalty for introducing interfacial defects in smaller SPCs could be responsible for their suppressed flexibility. Furthermore, these results indicate different pathways to thermodynamically stabilize the observed phase coexistence. In the next step, these pathways could be followed experimentally to further explore how spatial disorder can be leveraged to defect-engineer SPCs for functional applications. 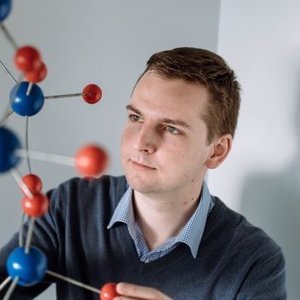 MOFs are like people: under pressure, they collapse. I investigate why and when (mainly for MOFs)
Follow