We discuss our recent study that explores conducting polymer nanostructures as a type of organic optical nanoantennas that can be tuned by redox reactions.

Metallic nanoparticles glitters in beautiful colours due to strong resonant interaction with light. This phenomenon can be found in daily life (since the medieval times) through stained glass windows, where metallic nanoparticles have been embedded in the glass to create vibrant colours. The nanoparticles absorb and scatter incident light by converting the photons to collective oscillations of the metal electrons. This collective oscillation is called a plasmon – or localized surface plasmon. Effectively, such plasmonic nanosystems enable control and manipulation of light at the nanoscale, with application areas nowadays spanning from sensors and displays to energy harvesting concepts and ultrathin flat lenses.

There is a growing interest in providing nanooptical systems that can be actively controlled after fabrication. Such systems would not only allow for shaping light at the nanoscale, but also to dynamically modulate such light-matter interactions back and forth. Because conventional metals like gold and silver have rather fixed material properties, researchers have begun to explore more exotic materials and different ways to tune nanooptical devices. Here, we show that certain redox-tuneable conductive polymers can be suitable for this purpose, by functioning as switchable nanooptical antenna.

Conducting polymers are a form of conjugated polymers that have been extensively studied and used in areas such as thermoelectrics and bioelectronics. So-called polaronic charge carriers along the polymer backbone (and compensating ions) enable these materials to conduct electricity. In a previous study performed by PhD student Shangzhi Chen in our team, in collaboration with researchers at the Terahertz Materials Analysis Center at Linköping University, we developed an ellipsometry-based methodology to retrieve the anisotropic complex permittivity of thin films of conductive polymers (Chen et al. Journal of Materials Chemistry C 2019, 7, 4350-4362).

Using the same method, we later identifed a high-conductivity polymer with optical properties seemingly allowing for excitation of plasmonic resonances. The polymer was poly(3,4-ethylenedioxythiophene:sulfate) (PEDOT:Sulf). Indeed, optical simulations of nanodisks made of this organic material predicted qualitatively similar nanooptical behaviour as for nanodisks made of gold, albeit at somewhat longer wavelengths. Shangzhi Chen developed a protocol to fabricate large surfaces covered with such polymer nanodisks and their measured optical response confirmed the simulated predictions, including how the nanooptical resonance position varies with the geometry of the nanostructures.

Figure 1. Photograph of a substrate coated with conductive polymer nanodisk antennas. The nanoantennas for this sample are active at infrared wavelengths and largely transparent to visible light. Photo: Thor Balkhed/Linköping University.

One of the exciting features of conductive polymers is that their properties can be tuned by changing the redox state of the material. Together with colleagues at the Laboratory of Organic Electronics at Linköping University, we used this feature to switch the polymer nanoantennas on and off, repeatedly. In its oxidized state, the polymer is conducting and provide optically metallic and plasmonic properties. In this state, the nanoantennas were active and turned on. By contrast, switching the polymer to its reduced state drastically reduces the polaronic charge carrier concentration, which effectively turned off the nanoantennas so that they no longer provided the nanooptical properties. Instead, the reduced nanodisks were essentially transparent to  light in the same spectral range. This type of switching behaviour and dynamic control of optical nanoantennas could find use in many applications, such as tuneable ultrathin flat lenses and metaoptics.

Figure 2. Artistic illustration of the concept of switchable organic optical nanoantennas that can be turned on (right) and off (left). Image by Conceptualized. 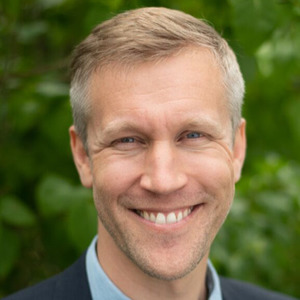 I am a senior lecturer at the Laboratory of Organic Electronics at Linköping University in Sweden. My research group bridges the fields of nanooptics and organic electronics and we are interested in both fundamental aspects and applications, including new types of energy harvesting, display and sensing concepts.
Follow
Nature Portfolio Device and Materials Engineering Community
We use cookies to help improve your experience. By continuing to browse our website you are consenting to our use of cookies.
Learn more