Active generation and magnetic actuation of microrobotic swarms in bio-fluids

Swarm behavior of living systems, which stems from the self-organization among individual elements, is a common feature in nature. Scientists use different agents for understanding the complex guiding principles of swarm behaviors of living systems, and roboticist developed various systems that can emulate complex swarm structures in nature through the designing of algorithms and wireless communications. However, creating a swarming robotic system at the microscale that embodies functional collective behaviours remains a challenge. Previously, our group (in the Chinese University of Hong Kong) has reported different out-of-equilibrium microrobotic swarms actuated by magnetic fields with great potential for in-vivo biomedical applications, i.e., vortex-like [1] and ribbon-like swarms [2]. These swarms can perform adaptive pattern reconfigurations and navigated locomotion following given orders.

However, bio-fluids are different environments from deionised (DI) water, and in order to deploy microrobotic swarms in a living body, the influence of bio-fluids on their actuation effectiveness should be investigated in advance. For instance, whole blood has a high viscosity and ionic strength, which can significantly influence the interactions among building blocks. When magnetic nanoparticles are applied as the agents to form the swarm, the high viscosity will increase the drag encountered by the particle chains during translational and rotational motion. Meanwhile, the high viscosity hinders the particle chains from rapidly responding to the external magnetic field, and therefore, when high-frequency fields are required to trigger swarm behaviours, the swarm generation and locomotion may not be effective in this kind of bio-fluids. On the contrary, when rich ions exist in fluids, the surfaces of particles will be charged, which normally leads to the aggregation of nanoagents. In some cases, this will disturb the regular fluidic flow field induced by the agents, and the actuation methods may require adjustment for the generation of the swarms. Besides, the countless blood cells make the blood from simple fluid into colloidal jamming. Because the size of the red blood cells (6 - 8 micron) is significantly larger than that of nanoparticles, the interaction among the cells and the particles cannot be neglected during the swarm generation. As another typical bio-fluid widely existed in living bodies, mesh-like viscoelastic fluids, such as vitreous humor may significantly hinder the formation and locomotion of the swarms.

In this work, we proposed a strategy for selecting the optimised swarms in different bio-fluids based on their physical properties. We used vortex-like swarms [1] and ribbon-like swarms [2] are representatives for medium-induced and magnetic field (MF)-induced swarms, respectively. Through experimentally investigating their generation behaviours in different artificial fluids with viscosity and ionic-strength gradient, the feasible region are labeled in Fig. 1a. The red and blue regions indicate the proper fluidic environments for the generation of medium-induced and MF-induced swarms, respectively. As long as the approximate physical properties of a bio-fluid is known, the optimised type of swarms can be obtained. As shown in Fig.1b, the experimental results have good agreement with the prediction. We revealed the changed swarm behaviours in different bio-fluids, and individually analysed the reasons for the change. This work sheds light on the understanding of microrobotic swarms, which is also an important intermediate step from fundamentals to potential clinics. 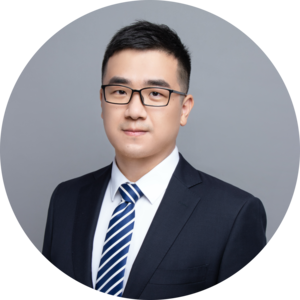 Dr. Yu received his B. Eng. degree from Harbin Institute of Technology (2014), and his Ph. D. degree from Chinese University of Hong Kong (2018). He worked as a postdoctoral fellow in Chinese University of Hong Kong (2018 - 2019), and subsequently in University of Toronto (2019 - 2020). Dr. Yu’s research interests mainly locate in micro/nanorobotics and medical robotics. Dr. Yu has been extensively working in swarm control of micro/nanorobots, including their fundamental modelling, actuation strategy, motion and reconfiguration control, and biomedical applications. Since 2017, he has first-authored 7 top journal papers, including Nature Communications, IJRR, T-Ro, T-Mech, and ACS Nano. Several of his journal papers have been indexed as ISI highly cited papers, and have been highlighted in Science, Nature and international press reports, such as CNN. He has also published 1 monograph and several papers on well-renowned international conferences, including ICRA and IROS. Dr. Yu won several impactful awards, including Nature Communications Top 50 physics articles (2018), T-Mech best paper award finalist (2020), CUHK Postgraduate Research Output Award (2018), Hong Kong Young Scientist Award shortlist (2018), the First Prize of International Bionic Innovation Competition (2019). He served as a guest editor for Frontiers in Robotics and AI, an associate editor for International Conference on Ubiquitous Robots 2019, and a reviewer for top journals and conferences, including T-Ro, T-Mech, RA-L, ICRA and IROS.
Follow