γ-alumina is an important oxide of in heterogeneous catalysis. It is however not stable in liquid water … unless you add a bit of polyols. Combining quantum simulations and experiments, we provide here the first mechanism describing the decomposition of alumina in water and how polyols inhibit it.

γ-Al2O3 is a prized oxide in heterogeneous catalysis with various applications of industrial relevance. γ-Al2O3 indeed exhibits a very versatile surface chemistry with remarkable physical and mechanical properties. Altogether, these properties make γ-Al2O3 a widely used material both as a catalyst or a support. However it suffers from one major weakness: it is not stable in water (steam or liquid). In the context of biomass valorisation (as an alternative to petroleum) and the ever more sought-after use of water as a green-solvent, such an Achilles’ heel becomes particularly regrettable. Encouragingly, some adsorbates have showed the ability to slow down or even totally inhibit the process of water-induced alteration of γ-Al2O3. But how? Can we rationalise their design?

How was the collaboration born?

This is roughly the context in which I started my PhD under the supervision of Prof. Sautet and Dr. Michel, on a project lying at the crossroads of their respective expertise, namely the development of models of γ-Al2O3 surfaces under operating conditions and rare-events simulations to describe atomic-scale mechanisms. Performing biased quantum molecular simulations; I was able, after more than two years of work, to propose the first mechanism describing the early stages of the decomposition of γ-Al2O3 at its most hydrophilic facet (later referred to (110) in the article). Literally, a major milestone for molecular simulations! But not enough to completely understand the stability of γ-Al2O3. Other facets might indeed be important. Step-edges. Kinks. A lot more simulations would have been needed to get the full picture. Still, I presented this at a conference and got lucky. I met Dr. Cabiac, who was supervising Dr. Girel’s PhD on the stability of γ-Al2O3 in liquid water from an experimental perspective. And the two approaches rapidly appeared to compensate each other’s shortcomings.

Let me now tell you the story!
γ-Al2O3 is a white powder at the macroscopic scale. At the mesoscopic scale (ca. 0.1 microns) it consists of particles, which have the characteristic shape of a hexagonal prism with three different facets (see Fig 1). By synthesising nanoparticles with various shapes and studying their stability in water, we have established a correlation between the total surface area of the (110) facet (represented in yellow in Fig 1) and the fragility of γ-Al2O3. The decomposition of γ-Al2O3 must therefore initiate at the (110) facet. And polyols can inhibit the decomposition (represented as umbrellas in Fig 1). How? Mystery. We need to go beyond a mesoscopic description and see what happens at the microscopic (=atomic) scale.
And that’s where simulations come into play. Our simulations have allowed us to identify the weak spot of γ-Al2O3 at the atomic scale: a tetrahedral Al atom with a thirst for adventure (and water!). Upon the adsorption of big enough polyols on neighbouring sites, surrounding water is pushed away from the weak spots keeping the area dry. Polyols literally act as molecular umbrellas, protecting remotely the weak spots from detrimental water.

Further information in our paper that you can find here. 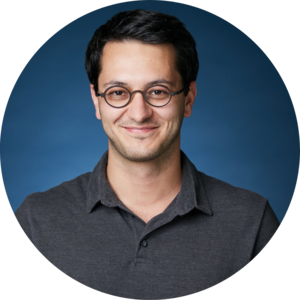