Thermal expansion is an impactful property of solids, governing the mechanical applicability, inducing stress and impacting degradation. In the design of systems, this necessitates workarounds or mitigation and adaptation. Bridges need expansion buffers, train tracks have to be either adjusted or built on nonexpansive ground to avoid collapse or breakup.

Even at the nanoscale thermal expansion holds challenges for material applicability. Functional devices might break due to expansion or compression, self-assemblies might be influenced due to strain induced by a higher network spacing.  At the same time control over the expansion, could open the possibility of thermoresponsive 2D materials.

Molecular architectures have achieved large thermal expansion in molecular systems due to the intrinsic flexibility, conformational changes or weak intermolecular interactions.  Understanding of such mechanism down to the molecular scale can further the potential for harnessing the expansion in future functional materials, especially in self-assemblies

In our study, recently published in Communications Materials (DOI: 10.1038/s43246-020-0009-2), we take a step towards controlling thermal expansion at the nanoscale by proposing a mechanism for giant thermal expansion based on alkly chain mobility. By comparing scanning probe microscopy measurements at 5 K and 300 K we could show giant thermal expansion of alkly side chain functionalized spoked wheel self-assembled networks. The spacing of the networks stabilized by interdigitation of side chains showed significant increase, while the adsorption geometry was retained, as illustrated in Fig.1. From this a thermal expansion coefficient of 980 ± 110 x 10-6 could be calculated.

Molecular dynamics simulations confirm the thermal expansion behaviour and indicate an expansion mechanism based on large anharmonic vibrations of the alkyl chain and entropic effects. Upon a temperature increase the mobility and fluctuations of the dodecyl side chains rises rapidly compared to the molecular core. The spacing of the network, compressed at lower temperatures, can however not accommodate the large induced fluctuations, damping the mobility of the chains. In a step wise process, the chains force the molecular network further apart, allowing the chains mobility to increase. Lost intermolecular interaction due less interdigitation of the alkyl chains is compensated by the increased entropy. 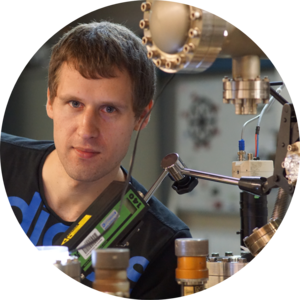