Kepler would love it.

The complex arrangement of matter at an atomic/molecular level may produce new material properties. Here, we describe how to prepare the complex structures by blending structurally similar, but chemically distinct, molecules.

The division of a plane into regular polygons has fascinated people since the ancient times. There are many monuments decorated by simple geometric objects forming complicated ornaments on murals or pavements across different cultures. The first rigorous mathematical treatment of tessellation of the Euclidean plane into regular polygons – tiles – was done by Johannes Kepler in his famous work Harmonices Mundi,  The Harmony of the World1.  This famous set of 5 books introduced mathematical description of planetary motion in the heliocentric system – Kepler’s Third Law. Surprisingly for many of his successors, a significant part of Harmonices Mundi was dedicated to tilings; in some transcriptions, these parts were shortened or even dismissed. Only in the 20th century was there a renewed interest in tilings as described in the excellent work by Grünbaum and Shephard.2

In Figure 1 there are examples of tilings. There are only 3 ways of forming regular tilings – by equilateral triangles, squares and hexagons – as there are strict mathematical criteria defining regular tiling. If we do not insist on a condition of a single type of tiles3, we arrive to an additional 8 semi-regular or Archimedean tilings. In these tilings the vertices – joints of tiles – are all equivalent. And if we allow more than one type of vertex, we arrive to uniform tilings.

However, tilings are not just a mathematical concept. The structure of material defines its properties.

How to realize them on an atomic/molecular level?

Employing self-assembly. Self-assembly is a spontaneous association of elementary building blocks into more complex structures. At a molecular level it allows the preparation of long-range-ordered nanostructures with tailored properties.

When I was selecting the system to start with on our new equipment at the CEITEC Nano facility in Brno, I opted to a simple molecular system to master the new methodological approaches. The choice was biphenyl dicarboxylic acid (Figure 2a) – a linear molecule with two functional groups capable of formation of extended supramolecular structures both alone and in combination with transition metals. The systems also offer an interesting feature – the carboxylic groups can be dehydrogenated (Figure 2b), which dramatically changes their properties.

Shortly after we begun, I was amazed by the power of LEEM in combination with other more known techniques.  During my Ph.D. and postdoc times, we gradually annealed the sample to an increasing temperature for an arbitrary chosen time interval, and checked the changes later by scanning tunneling microscopy or X-ray photoelectron spectroscopy. But with LEEM, you see in real time what is happening on the surface, and you can stop exactly when there is a desired structure on the surface; there was no blind annealing anymore. This also enables the identifications of transient phases and reproducibly prepare them on the entire sample.

Back to the self-assembly. Nature tends to produce simple structures. So, a single component system will usually form a regular or a semi-regular tiling. Even if we put together multiple components, they also tend to produce simple structures in the single phase, or they just segregate into two parts. So, we need something to put two distinct phases – each showing a characteristic binding motif – together. And this is exactly what our molecule can do. It has two carboxyl groups that can be dehydrogenated. Importantly one of them can be dehydrogenated whereas the second remains intact. And having a mixture of intact, fully transformed and partially transformed molecules enables us to put together two binding motifs characteristic for the pure phase and bind them together by a hybrid molecule (Figure 3). So, we arrive on a structure showing several types of vertices – a representation of a 2- or 3-uniform tiling (Figure 4).

Read our paper for the full story!4

Figure 4: Molecular phases and tilings. (a) Molecular model of the complex phase with a schematic of the tiling. The vertices of the tiling are associated with centers of molecules. (b) 3-Uniform tiling with distinct vertices marked by arcs. 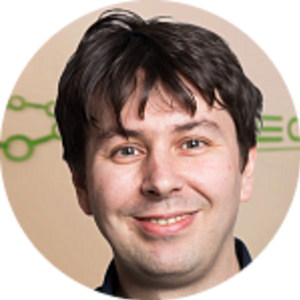