B. Chad Hornbuckle and Kris A. Darling

Bulk nanocrystalline metals, with a mean grain size < 100 nanometers, have order-of-magnitude increases in strength and unique deformation responses that deviate drastically from their coarse-grained equivalents, in part owing to a large reduction in grain size. Though an understanding of the bulk mechanical response of nanocrystalline metals have been pursued intensely for over 3 decades much remains a mystery with respect to their true mechanical response. The simultaneous occurrence of extensive, rapid grain growth with deformation results in uncertainty in the knowledge of how these materials would respond if there was no microstructural coarsening.  This handicap becomes exponentially problematic as testing conditions become more and more extreme; and the already unstable nanocrystalline microstructures become obliterated under the drastically intensified driving force to rearrange and grow.  The difficulty in decoupling the influence of grain growth from their mechanical response has been such a challenge that the inability to do so has given rise to common stigmas (misconceptions), which limit the perceived expectations with regard to the performance capabilities of these new materials by the community.  This mind state however, provides a new frontier for fundamental discovery where opportunities exist to get beyond the perceived mechanical limits which have been called out in this discipline of science.  This is most typified when considering the mechanical behaviour of nanocrystalline metals under extreme and/or far from equilibrium conditions.

At its basis, shock physics has been used to probe and manipulate materials and their behavior under some of the most extreme physics engineered here on earth.  Shock compression of condensed matter has been used to understand changes and deformation response in a wide variety of materials which are subjected to potentially catastrophic events, including high-speed automobile and aircraft collisions, explosions/detonations, armor penetration, meteor impacts, interstellar dust–dust collisions, and inertial confinement fusion.  Consequently, when all known conventional coarse grained polycrystalline metals are subjected to impulse loading in shock, their microstructures disintegrate into a very nonequilibrium highly defected state. The coarse grain equiaxed microstructure evolves high concentrations of heterogeneous defects, such as micro-bands, dense dislocation-cell-structures, voids, regions of amorphous/shocked structures, and cracks, leaving the former microstructural state unidentifiable. Compared to conventional polycrystalline metals with their relatively coarse grains, microstructures of nanograined metals such as copper, are extremely unstable to stress and temperature, having driving forces for grain coarsening 6 orders-of-magnitude higher.  In fact, nanocrystalline Cu is generally so unstable that its microstructure is found to coarsen over time even at room temperature in the absence of deformation.

Here we show, a recently developed nanocrystalline Cu-Ta alloy, having an average grain size stabilized to < 100 nm, was shock compressed to approximately 15 GPa. This is the first time ever a bulk nanocrystalline material has been successfully shock compressed to a stable high pressure Hugoniot state. Detailed microstructural characterizations of the shock compressed samples of the alloy show that the microstructure remained practically unchanged.  This microstructural insensitivity was also reflected in the absence of shock hardening of the microstructure.  These findings indicate that it is possible to stabilize nanocrystalline alloys, making their microstructures generally shock insensitive.  This is the first time that microstructural insensitivity to such extreme shock condition has been observed and is in contrary to the findings for any other known alloys with conventional micron-sized grains under similar shock condition. This result raises the possibility of applications for nanocrystalline metals or similar alloys for structures that require materials to absorb high energy loading without undergoing catastrophic changes during projectile impact and ballistic/shock loading events. 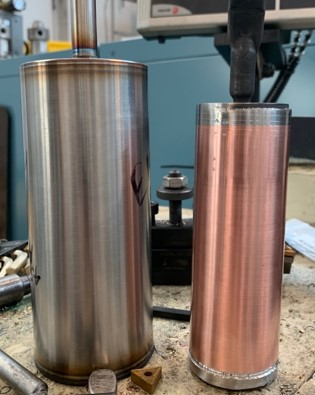 Image of a Hot Isostatic Pressing (HIP) can awaiting to be processed (left gray colored cylinder) containing nanocrystalline Cu-Ta powder and a consolidated piece of Cu-Ta (right copper colored cylinder) resulting from a HIP run. The HIPed piece of Cu-Ta has a diameter of ~ 1.75 inches (4.45 cm) and is 5 inches (12.7 cm) in length, while still retaining a 100 nm grain size after the HIPing process. This bulk piece of CuTa illustrates the scalability of this alloy and the large scale test that can be performed with such a piece that were never before possible with nanocrystalline materials.

For more details, you can read our full paper "Stable microstructure in a nanocrystalline copper-tantalum alloy during shock loading" published in Communications Materials.