The electronic mobility is one of the core physical parameters for electronic materials. In recent years, organic electronic materials have achieved large-scale industrial applications in the field of light-emitting displays and the mechanism of carrier transport in organic field-effect devices has attracted widespread attention. On the one hand, people are designing high-mobility molecules, and on the other hand, they are also trying to understand the transport mechanism of the novel electronic materials. Zhigang Shuai's research group in the Department of Chemistry, Tsinghua University has long been devoted to the theories of luminescence and charge transport in organic materials. According to the classic Boltzmann theory, charge transport is determined by the scattering of electrons (or holes) by the vibration of the lattice and/or the impurity defects. For traditional inorganic materials such as silicon single crystals, their transport property can be determined by the band theory, in which case the microscopic image is very clear and the calculation of mobility is straight-forward. However, for organic electronic materials, due to the weak interaction between molecules, strong electron-lattice coupling, significant quantum fluctuations of carbon atoms, and the presence of impurities and disorder, there is a fierce controversy over the carrier transport mechanism. Over the past 20 years, people have generally adopted the local charge hopping model, that is, using Marcus theory, to illustrate the relationship between molecular structure, stacking structure and mobility (J. Chem. Phys., 2020, 153, 080902). Even device simulations also assume that the charge is localized and jumps between disordered energy levels (Adv. Funct. Mater., 2017, 27, 1605715). However, the low-temperature measurement of high-purity single crystal samples shows that the charge transport has an extended state band behavior. In order to reconcile the picture of localized charge and the behavior of band-like electrons, Fratini et al. proposed a new theoretical model of charge transfer, termed "transient localization" (Nat. Mater., 2017, 16, 998), from the perspective of intermolecular charge-vibration coupling under the assumption that the dynamic disorder limits the conductance, as first proposed by Troisi, attracting extensive experimental attention. Because this theory uses classical mechanics for dynamic disorder, it ignores the quantum fluctuation effect of nuclear motion, and at the same time introduces "relaxation time approximation", so the error is uncontrollable and will affect the molecular design strategy. In fact, Zhigang Shuai’s research group has pointed out that in organic materials and carbon-based materials, the quantum fluctuations of carbon atoms have a very significant driving effect on carrier transport (Adv. Mater., 2012, 24, 3568). Therefore, to describe charge transport one must go beyond the Born-Oppenheimer approximation and take the quantum effect of atoms into account. That is, the carrier transport of organic and carbon-based materials must be studied from the perspective of quantum dynamics. It is a significant challenge for theoretical methods.

Aiming at the problem of quantum dynamics of complex systems, Zhigang Shuai’s group has extended the theoretical framework of density matrix renormalization group developed by theoretical physicists to time evolution and finite temperature, and used it to calculate the spectrum of molecular aggregates (J. Chem. Theor. Comput., 2018, 14, 5027). The evolution scheme of the time-dependent variational principle coupled with projection operator splitting developed by theoretical physicists satisfies both unitary and symplectic symmetry (that is, the symplectic structure proposed by Feng Kang), so as to ensure that the energy and norm of the wave function are conserved during time evolution, allowing large-step evolution (J Chem. Phys., 2020, 152, 024127). The carrier transport phenomenon in organic semiconductors can be described by the model of intramolecular electron-phonon coupling (Holstein coupling) and intermolecular electron-phonon coupling (Peierls coupling). Just like electron-electron correlation, electron-phonon coupling is also a multi-body problem, and exact solution for the problem will also encounter the "exponential wall”. In actual systems, the intramolecular and intermolecular vibrational frequencies span multiple time scales, making full quantum treatment even more difficult. Density matrix renormalization group theory is developed for strongly correlated systems, the purpose is to reduce the exponential growth of computational cost to algebraic growth by decomposing the wave function according to quantum entanglement. Zhigang Shuai et al. first developed a method for calculating the mobility with the time-dependent density matrix renormalization group theory (J. Phys. Chem. Lett., 2020, 11, 4930, cover paper), and proved that this method can cover the regimes from the localized hopping limit to the extended band transport limit. At the same time, the method also confirms the "negative isotope effect" given by Zhigang Shuai et al.  based on the "quantum nuclear tunneling" model, and the mean free path of carriers can also be calculated.

Utilizing this method, Zhigang Shuai’s research group has calculated the "dynamic disorder" effect that has attracted attention in recent years. Based on the Holstein-Peierls model of molecular crystals, a unified theoretical picture of the charge mobility of organic semiconductors is proposed (see the figure below), recently published on Nature Communications. The x axis V in Figure 1 represents the transfer integral between molecules, and the y axis ΔV represents its fluctuations (i.e. dynamic disorder): the hopping zone corresponds to the Marcus theory under the semi-classical limit and If the quantum nature of nucleus is considered it corresponds to the "quantum nuclear tunneling" model; The phonon-assisted current region is unique for localized charges, because in general phonons hinder charge transfer through scattering (the source of resistance). However, in the case of small V and large ΔV, the intermolecular vibration will promote the transfer instead of hinder it; in the case of large V and small ΔV, the conduction mechanism is the so-called band-like transport. The specific behavior is the relaxation of carrier distribution caused by phonon scattering, which can be described by Boltzmann transport theory, suitable for almost all inorganic materials (represented by silicon single crystal); The transient localization regime is located at the top of the regime diagram, which corresponds to large ΔV. The method also yields an area that cannot be classified into any known charge transport mechanism, which is marked as an intermediate area. 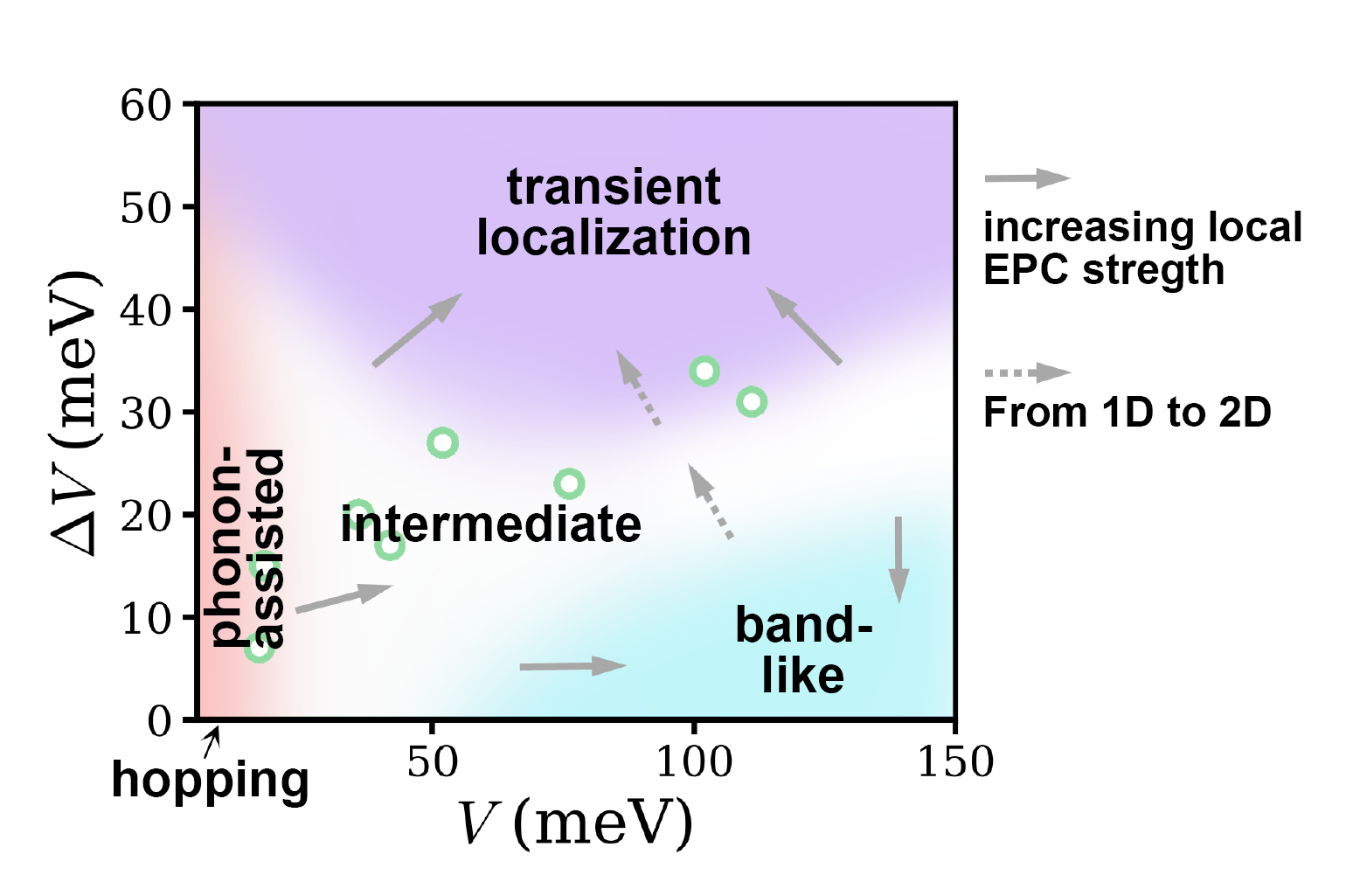 For more details, please check out our recent work published on Nature Communications: “A general charge transport picture for organic semiconductors with nonlocal electron-phonon couplings” at the link: https://www.nature.com/articles/s41467-021-24520-y