My research group led by Associate Prof Lo and Associate Prof Namdas at The University of Queensland (UQ) has been tackling the multiple challenges towards development of stable organic solid-state laser diodes (OSLDs). Among these challenges, we identified that the ability to manage the non-emissive triplet-excited states is crucial for OSLDs. This is because 75% of the excitons generated in electrical excitation are triplets according to spin statistics. The direct generation of a large proportion of non-emissive triplet excited-states together with their significantly long lifetime lead to very high accumulation of triplet excitons. Consequently, this leads to loss of emissive singlet excitons via non-radiative Förster mediated process, generally referred to as singlet-triplet annihilation (STA). Furthermore, the large triplet population has also been shown to be one of the major culprits leading to degradation of the organic laser gain medium.

To specifically address the losses arising due to accumulating triplet excited-states, we have successfully developed new organic laser dyes that show excellent triplet absorption separation from their lasing wavelength by investigating: (i) a family of molecules termed Excited-State Intramolecular Proton Transfer (ESIPT), and innovating (ii) a new series of hybrid dyes based on fluorene and vinylphenylcarbazole. Through these works, we demonstrated the lowest waveguide loss coefficient reported for solution-processed organic semiconductors with the ESIPT dye, and achieve state-of-the-art ASE and lasing thresholds with the new hybrid dyes, or even demonstrating lasers under qCW operation. While our approaches have effectively minimised the loss due to triplet, we learnt that the issue of triplet accumulation within these systems remained to be tackled (also see https://doi.org/10.1038/s41467-020-18094-4). That was when I started to think about elimination of the triplet excited-states from the system, resulting in this collaborative paper with Flinders (Australia) and Kyushu (Japan) Universities.

Prior to our work, the idea of using triplet quenchers has been reported, with oxygen, anthracene, and cyclooctatetraene (COT) known as the most efficient triplet quenchers. However, all of these have their respective limitations, rendering them incompatible with OSLDs. Specifically, COT that has consistently been highlighted as a highly promising triplet quencher thanks to its relatively much shorter triplet lifetime (100 µs) and low triplet energy, is a liquid at ambient conditions and volatile— hence it is unfortunately incompatible with thin-film devices. Building upon this knowledge, I designed and synthesised a solid-state triplet quencher based on COT, named mCP-COT (Figure 1a).

In this collaborative work, Asst Prof Mamada and Toshiya Fukunaga at OPERA directed by Prof Adachi at Kyushu University, conducted in-depth DFT simulation and photophysical properties studies to demonstrate a complete suppression of STA and a 20-fold increase in excited-state photostability of the laser dye under continuous-wave excitation when blended with mCP-COT (Figure 1b & c). Viqar (now Dr Ahmad) at UQ’s School of Mathematics and Physics (SMP), with the help of Dr Sobus (SMP), used small-area OLEDs (0.2 mm2) to successfully validate efficient STA suppression by the quencher, supported by the observed STA quenching under electrical excitation (Figure 1d). Atul Shukla (SMP), guided by Dr Moore (SCMB), performed transient absorption spectroscopy to confirm the ultrafast transfer of triplet excitons from the mCP unit to the COT moiety. Moreover, Gowri Krishnan from Prof Andersson’s group at Flinders University joined the force to decode mCP-COT’s neat-film electronic properties through UPS and IPES measurements. Together as a research team, we demonstrated for the first time excellent triplet quenching ability under both optical and electrical excitations in the nanosecond range via the use of the new solid triplet quencher. 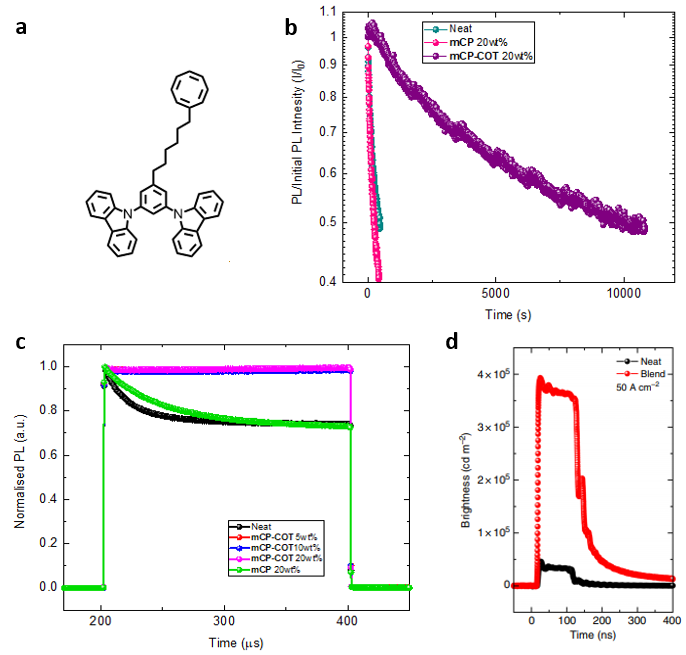 We believe our study lays a robust stepping stone on the path towards realising a stable OSLD, and are eager to see future research adapting our findings to reach new exciting possibilities. If you are interested in finding out more about this work, please refer to our paper published in Nature Communications; Solid cyclooctatetraene-based triplet quencher demonstrating excellent suppression of singlet–triplet annihilation in optical and electrical excitation. 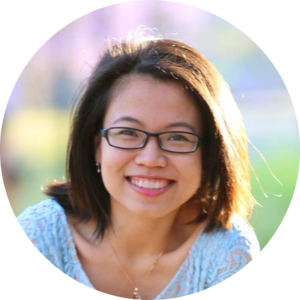