A regular array of metal atoms

The realization of long-range ordered metallic superstructures on surfaces of bulk insulators is one of the great remaining obstacles in material and surface science.

Intrigued by this open question, we always dreamed of developing a strategy for positioning metal atoms onto a bulk insulator surface in an ordered fashion. Such an arrangement would open up exciting possibilities for the fabrication novel types of functional units for future applications in data storage and optical and chemical sensing. However, the realization of such long-range ordered arrays is rather challenging and typically hindered by the usually weak interaction of bulk insulator surfaces with adsorbed metal atoms. Instead, the strong interaction between the metallic adsorbates typically results in the formation of 3D clusters with many thousand and more of metal atoms rather than a controlled grid-like structure.

In our work, we conceived a fundamentally different approach for our successful realization of an ordered metallic template on a bulk insulator surface. Instead of directly growing metallic adsorbates on the insulator surface, we employed metal-carrying molecular complexes in which the metal centers are encapsulated by a functionalized organic ligand system. This approach was inspired by recent results of the group of Martin Aeschlimann and Benjamin Stadtmüller, both professors at the Technical University Kaiserslautern. Their team investigated the structure formation of dimolybdenum tetraacetate (in short MoMo as it contains two molybdenum atoms) on several metal surfaces. They discovered an interesting structural phase in which the MoMo molecules form a long-range ordered structure on a copper surface in which one Mo atom of each molecule directly points towards the copper surface. This observation set the stage for our joint work, which arose during an inspiring meeting of our two groups in Kaiserslautern. During this meeting, Aeschlimann Junior – with a profound background of molecular structure formation on the bulk insulator surface of calcite from his bachelor thesis – came up this the ideas of using MoMo for creating a regular metal array on a bulk insulator surface.

In a team with bachelor student Sebastian Bauer and doctoral student Maximilian Vogtland, Simon Aeschlimann very successful put his plan into action. This group of young investigators achieved the spectacular results shown in our publication and discussed enthusiastically possible mechanisms that might be responsible for the observed anchoring. Their initial ideas received prominent support from density functional theory calculations from Andrea Floris and Monte Carlo simulations from Ralf Bechstein, arriving at a comprehensive picture of what happens in this exciting system.

We are convinced that our initial realization of ordered metallic arrays on bulk insulator surfaces will pave the way towards designing and tailoring the periodicity and symmetry of the metallic superstructures on insulating surfaces by chemical functionalization of metal-carrying molecular complexes. 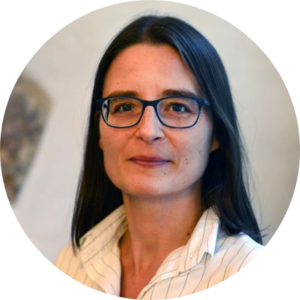