Modulation in the anomalous Hall resistance of a single device comprising Ta/CoFeB/MgO heterostructure can be used to probe three-dimensional magnetic fields with high sensitivity and good linearity.

With the conventional transistor approaching its physical limits, the heterogeneous integration technology that integrates diversified functions on one chip, opens a new way and has been an industry trend in the post-Moore law period. Tremendous efforts have been devoted to this field including the integrations of sensors, MEMS, optoelectronics, RF and mm-wave devices. On the other hand, for the artificial intelligence system, sensor-enabled perceptual ability is as important as the learning ability and reasoning ability, which is generally realized by neurocomputing. At present, the detection technology of one-dimensional magnetic field is very mature. Actually, the detection of three-dimensional magnetic field is more practical. The traditional method of measuring a three-dimensional magnetic field is to use three sensors to obtain the magnitude of the magnetic field components along the three coordinate axes (x, y, and z), or to use a magnetic flux guide to deflect the magnetic field to the detection direction of planar sensors. However, these solutions have the problem that the three measured magnetic field components are not orthogonal or not in the same spatial position. 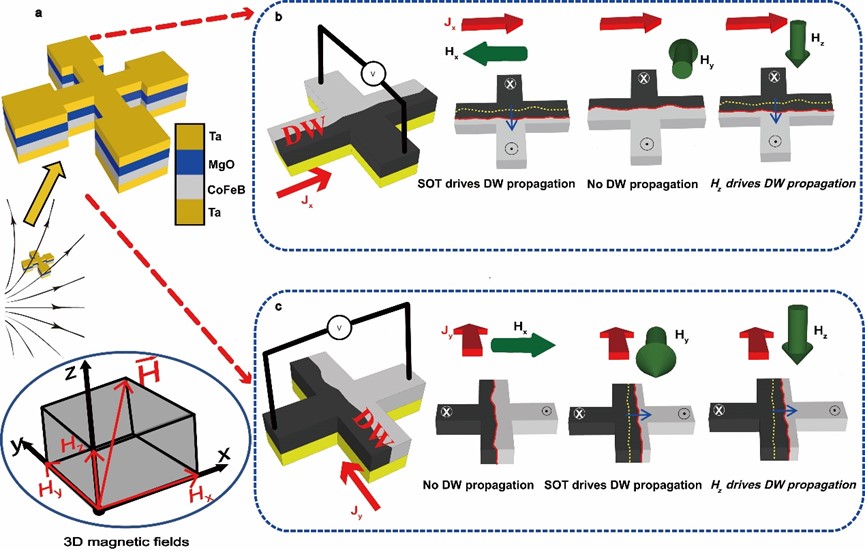 Here we propose a single spin–orbit torque memristive device comprised of a Ta/CoFeB/MgO heterostructure and it can detect a vector magnetic field (see Fig.1). A vector magnetic field is composed of two in-plane (IP, Hx or Hy) components and one out-of-plane (OOP, Hz) component, and these three elements can lead to the displacement of domain walls in the CoFeB layer, modulating the associated anomalous Hall effect (AHE) resistance. We derive the relationships between the measured AHE resistance and the three orthogonal components, and show that they are linear for certain ranges. In particular, the sensor has a linear range between −10 and +10 Oe for IP field, and between −4 and +4 Oe for OOP field. Specifically, the relationships between Rxy (Ryx) and Hx, Hy, Hz under Jx (Jy) = ±6.8 MA/cm2 are depicted in Fig. 2a–f. Note that Rxy-Hz (Ryx-Hz) curves are unchanged when the current polarity reverses, Rxy-Hx (Ryx-Hy) curves under ±6.8 MA/cm2 are symmetrical about the horizontal ordinate, and Rxy-Hy (Ryx-Hx) curves under ±6.8 MA/cm2 always keep a constant. Based on this, we can measure two AHE resistance values under positive and negative current densities in x axis, named Rxy (+Jx) and Rxy (−Jx). According to the symmetry of R-H curves under different current polarities (Fig. 2), if the two AHE resistance values are processed with a subtraction operation, enabling the elimination of Hz contribution, the net resistance contributed by only Hx component can be obtained. Similarly, we can get the net resistance contributed by only Hy or Hz component (see Fig.3). Accordingly, one can know the magnitude and direction of the vector magnetic field by composing (Hx, Hy, Hz). 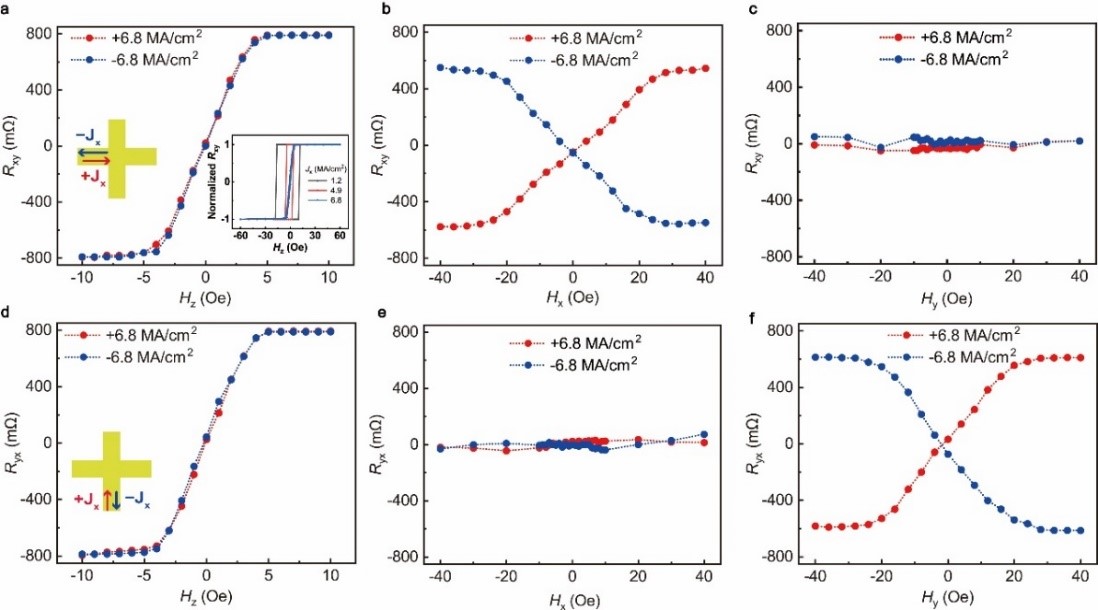 How can we think of designing a 3D magnetic sensor in this way? This work is inspired from our study on the modulation of the resistance of Ta/CoFeB/MgO heterostructure under different external magnetic fields and current densities. Our laboratory was established in 2016, after professor Long You came to Huazhong University of Science and Technology. In the next few years, we found that the increasing write current density can gradually reduce the coercivity of the device until it reaches zero (which can be seen in our previous work: 2018 IEEE International Electron Devices Meeting (IEDM), doi: 10.1109/IEDM.2018.8614638). We also found that the current and the IP field have a continuous control effect on the resistance of the device through domain wall motion, which is acting as a memristor (Adv. Electron. Mater. 2019, 5, 1800782; Appl. Phys. Lett. 114, 042401 (2019)). Based on the previous work, we found that the influence of positive and negative currents on R-Hx and R-Hz is not the same. Using this symmetry, we can just explore the contribution of one magnetic field component to resistance. Then we design a geometrically symmetric Hall bar structure to conduct the experiments. These experimental results are consistent with the theoretical expectations we did before the experiment.

We are thankful to the editorial and the review team for providing us with constructive feedback to help us improve this work at each step. We hope that the ideas presented will be useful for the community and enable better/ efficient optimization in future. 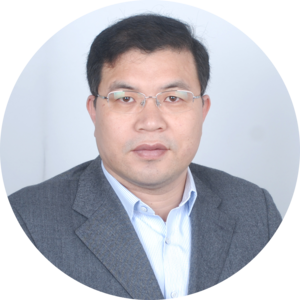