In this study, we demonstrate Silicon processed by modern lithography techniques exhibits superior plasticity, near ideal strength and an ultrahigh elastic strain limit. This study demonstrates a surface engineering pathway for fabrication of more robust Si-based structures in microelectronics.

The modern world runs on Silicon. Its electronic and structural properties make it the preeminent material for electronics and MEMS. However, the intrinsic brittleness of Si often leads to catastrophic failures in these structural components. The fracture of Si also restricts the potential for strain engineering of its electronic properties in the elastic regime. Our research in the Laboratory for Nanometallurgy at ETH Zurich demonstrates that lithographically-etched Si exhibits high strength, enhanced elasticity, and plasticity extending into the micron-scales, i.e., one magnitude larger than previous observations.

My previous laboratory, the Laboratory for Mechanics of Materials & Nanostructures at Empa, was one of the first to discover that the miniaturization of test samples of brittle materials to the nanoscale could suppress fracture and allow the investigation of plasticity in semiconductors and ceramics. However, the main method for fabricating these structures, the focused ion beam (FIB), imparts damage into the material, so the question always lingers in the back of your head whether the measured behavior of such structures is the true, intrinsic behavior of the material. So we have been improving our testing methods and investigating ways to remove this FIB damage and alternative fabrication methods for these structures for nearly a decade now.

From our previous attempts, we had seen that the effect of these fabrication techniques on the surface state on the resulting mechanical properties could be significant. FIB milling induces an amorphous layer and lattice damage on the surface of semiconductors. Conventional lithography also leaves fluorocarbon residues and ion damage after reactive ion etching. In this work, we employed high resolution lithographic etching to fabricate Si pillars with various diameters from nano- to micron-scales. After that, we grew a thermal oxide layer into the Si substrates and then chemically etched this oxide layer away. This left us with our long sought after goal of a micropillar with a nearly flawless structure and damage-free surface.

We had anticipated that removing the defects would increase the strength and ductility, but what really surprised us how the deformation behavior changed. Instead of a few dislocation slip traces nucleating from the top of the pillars, as we had seen in FIB-milled structures, we observed nearly homogeneous defect nucleation throughout the lithography pillars. Then, as we tested smaller and smaller pillars, we saw a new transition in dislocation behavior, as perfect dislocations began to operate and dominate the deformation behavior at small scales. To paraphrase Richard Feynmann's famous saying, "There's plenty of room for discoveries at the bottom!" 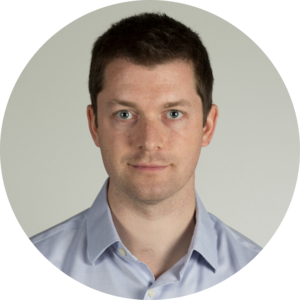 Jeffrey M. Wheeler is a leader in the areas of high temperature nanoindentation and micromechanical testing, particularly in situ in the SEM. His current research interests focus on the plasticity of strong materials at small length scales. He received his diploma in Materials Science and Engineering as a Camras/NEXT scholar at the Illinois Institute of Technology in Chicago in 2005. He then joined the Department of Materials Science and Metallurgy at the University of Cambridge as an NSF Graduate Research Fellow where he earned his PhD on “Nanoindentation under Dynamic Conditions” in 2009. Subsequently, he joined the scientific staff at Empa, the Swiss Federal Laboratory for Materials Science and Technology, where he developed the first high temperature nanomechanical testing system capable of allowing direct visualization of testing in situ in the scanning electron microscope. He is currently a Senior Scientist within the Laboratory for Nanometallurgy in the Department of Materials Science at ETH Zürich in Switzerland, where he leads a research group on the Micromechanics of Materials.
Follow