Organic-inorganic hybrid perovskites (OIHPs) have attracted great research interests as promising materials for the next generation photovoltaic energy harvesting, electro-optic detection, and all-optical conversion. Their remarkable properties are underpinned by hybrid perovskite atomic structures. For example, the corner-sharing [PbI6]4- octahedron is believed to be beneficial for carrier diffusion, and the organic cations as well as the hydrogen bonding may lead to spontaneous polarization and ferroelectricity, which promotes the separation of photoexcited electron-hole pairs, and improves the carrier lifetime. Understanding the atomic structure and structural instability of organic-inorganic hybrid perovskites is the key to appreciate their remarkable photoelectric properties and understand failure mechanism. However, atomic imaging of OIHPs by electron microscopy is challenging due to the extreme beam-sensitivity. In fact, so far, the damage-free pristine structure of CH3NH3PbI3 (MAPbI3) has never been captured at the atomic scale.

In our recent paper in Nature Communications (https://www.nature.com/articles/s41467-021-25832-9), we adopted low-dose imaging by direct-detection electron-counting camera and successfully imaged the atomic structure of perovskite MAPbI3 at a dose as low as 0.7 e Å-2. We further observed a two-step degradation pathway at the atomic scale, initiated with the loss of MA+ to form a superstructure MA0.5PbI3 with ordered MA+ vacancies, followed by the collapse of perovskite framework through diffusion of I- and Pb2+ to form the decomposed 6H-PbI2, during which C–N bonds can be destroyed under irradiation, releasing NH3 and HI and leaving hydrocarbons. Such degradation process leads to the gradual increase of bandgap. Interestingly, the intermediate phase (MA0.5PbI3) with locally ordered vacancies can robustly exist before perovskite collapses, enlightening strategies for prevention and recovery of these material during degradation. 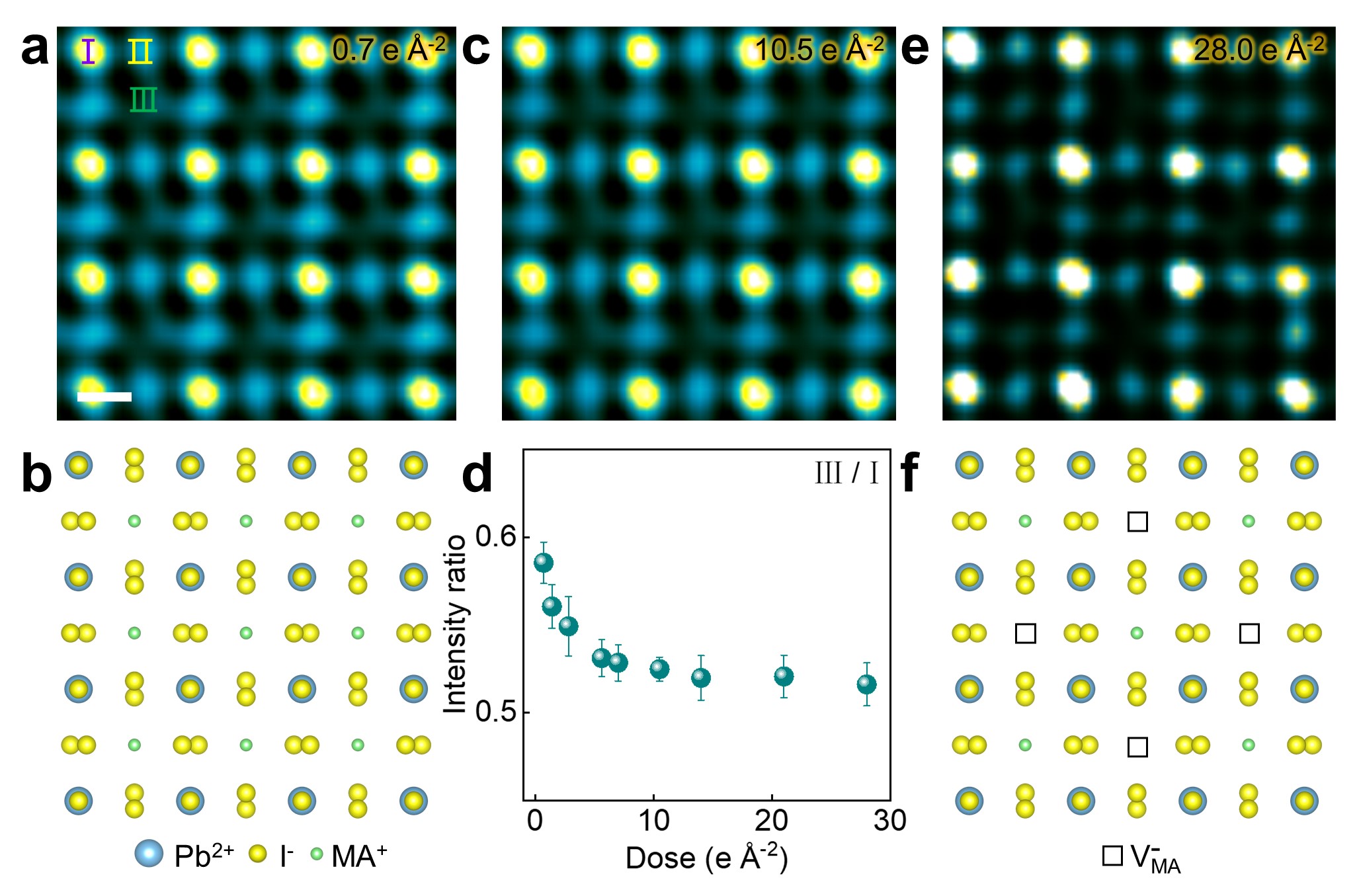 Combined direct-detection electron-counting (DDEC) camera and an imaging technique using a negative value of the spherical-aberration coefficient, we have obtained the atomic structure of MAPbI3 and identified ‘Ⅰ’, ‘Ⅱ’ and ‘Ⅲ’ columns to be Pb2+-I-, I- and MA+ (Fig. 1a,b), respectively. With increased dose, the intensity of MA+ is decreased at 10.5 e Å-2 (Fig. 1c). The quantitative intensity analysis (Fig. 1d) further verifies that MA+ intensity progressively decreases within the initial 10.5 e Å-2, and then remains stable until 28.0 e Å-2. The decreased intensity is caused by the formation of  while the unchanged intensity is likely resulted from a relatively stable intermediate phase with the preserved of perovskite framework. Fig. 1e further shows  appears at every other ‘Ⅲ’ column, as illustrated in Fig. 1f. Such a cation-vacancy-ordered structure corresponds to MA0.5PbI3, whose stability is verified by molecular dynamic simulation. Accordingly, it is concluded that the loss of MA+ starts even at 1.0 e Å-2 and reaches a balanced state between ~10.5 and 28.0 e Å-2 to form ordered , wherein the perovskite structure framework is preserved. 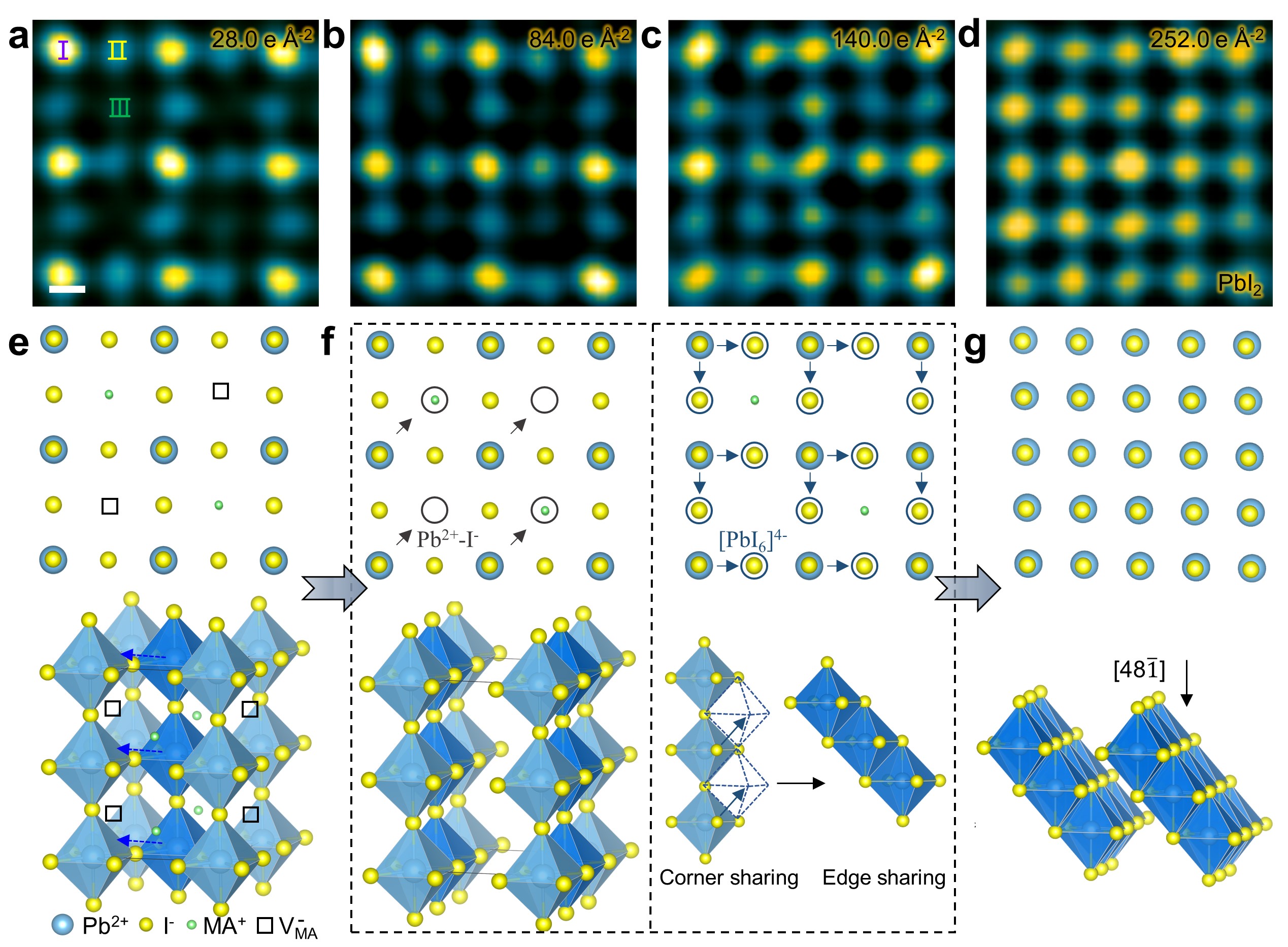 We further investigate the atomic-scale decomposition pathway of MAPbI3. Fig. 2a is the structure of perovskite with , as illustrated in Fig. 2e. With increased doses, it is observed that the intensities of these three columns gradually change (Fig. 2b-d). A quantitative analysis of the intensity changes shows that the intensities of ‘Ⅰ’ columns initially increase and then gradually decrease while the intensities of ‘Ⅱ’ columns continuously increase and the intensities of ‘Ⅲ’ columns initially decrease and then gradually increase. Finally, intensities of all three type columns converge, indicating the formation of PbI2. The initial intensity decrease of MA+ column results from the formation of , while the following increased intensity of MA+ column and decreased intensity of Pb2+-I- column are believed to be caused by two kinds of Pb2+ and I- diffusion as illustrated in Fig. 2f. One is the diffusion of Pb2+ and I- into  while the other is caused by the [PbI6]4- octahedron slipping from corner sharing to edge sharing. Finally, the structure gradually evolves to PbI2. Fig. 2 e-g illustrate the atomic-scale structural evolution and the related ion migration during the decomposition from MAPbI3, MA0.5PbI3, to the final PbI2, mainly involving two processes, forming and the collapse of perovskite structure via diffusion of Pb2+ and I-.

Our work has acquired the atomic structure of MAPbI3, determined the threshold doses during TEM characterizations, and clarified the atomic-scale ion migration during its degradation into PbI2. We hope the determined dose can be used to guide the future TEM characterizations and the direct visualization of structure and degradation process at the atomic scale can provide valuable insights into understanding the properties, stability, photoelectric behaviors, and optimization strategies of OIHPs. In addition, the current work is to first reveal the structure and the degradation mechanism, and the exploration in the field of perovskite by TEM is much more than this. The defects, interfaces and domain walls in hybrid perovskites as well as in-situ TEM are all worth studying.

Back to Behind the Paper
Next