For enhanced mechanistic understanding, we identified a dynamic interaction between two surface states on hematite photoanodes and newly proposed the chemical nature of one surface state as an iron-peroxo species, in addition to another iron-oxo species.

The term “surface state” is widely adopted in the photoanode community. However, the specific role of surface states in catalysis remains largely elusive. To address this key issue, we asked a fundamental question: “What is the role of surface states in the catalytic mechanisms?” While addressing this question for water oxidation with hematite photoanodes as an attractive model system, we found that surface states can mediate both the charge transfer and the recombination processes at the semiconductor-electrolyte interface. This new perception of surface states is in sharp contrast to previous results, where reaction intermediates were assigned to charge transfer processes, and trap states were believed to act as recombination sites. Further, this dual functionality of surface states directed us to another crucial question, namely: “What is the chemical nature of these surface states?” For hematite photoanodes, two different types of surface states were widely probed. The first, with higher oxidative energy (S1), was assigned to reaction intermediates, and the second one with lower oxidative energy (S2) was associated with recombination centres. However, we found that this assignment of recombination centres was mainly based on the presence of limited photocurrents when the S2 state appeared. Therefore, we were interested in finding out whether this criterion was really sufficient to exclude the possible contribution of the S2 surface state to water oxidation. Motivated to explore S2 further, we decided to first reproduce both surface states on a model hematite photoanode and then to explore the real chemical nature of S2.

To this end, both S1 and S2 were resolved using photoelectrochemical impedance techniques in a near-neutral unbuffered electrolyte. Since the density of both surface states responds positively to the excitation intensity, we applied rate law analyses to derive the reaction orders for surface holes at potentials of 0.9 and 1.3 V vs. RHE, where S1 and S2 reach their maximum values. As expected, accumulation induced an evolution of reaction kinetics that was observed for both S1 and S2. In the weak excitation range, the obtained photocurrent was found to be independent or linear dependent on surface holes, respectively, at 0.9 and 1.3 V vs. RHE. However, shared 3rd order kinetics were observed at high illumination intensity.

To understand the different kinetics, fast-cathodic cyclic voltammetry (CV) scans were applied to estimate the lifetime and interplay of both surface states. We found that S2 had surprisingly long lifetimes and that its density depends on the scan rate, the initial steady-state voltage and the excitation intensity. Additionally, we explained those fast-cathodic CV scan data with an interconversion model of S1 to S2 and - more importantly – this also explained the different rate kinetics. To confirm this interplay of S1 and S2, we further conducted rate law, fast-cathodic CV scans and transient photocurrent analyses at different pH values and in buffered electrolytes. Altogether, these experiments strongly support the evolution of S1 to S2. We thus assigned S2 to iron-peroxo species, which are generated as a result of S1 (iron-oxo) accumulation (Figure 1). In the next step, a vibrational signature is important to further verify the chemical nature of S2 and we are still working on it. We believe that understanding the dynamic interactions of the surface states and the effects of charge accumulation is indispensable to decode the reaction mechanisms of multi-electron transfer processes in key catalytic transformations, such as water oxidation. 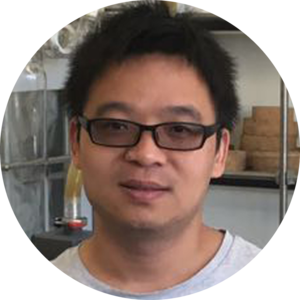