At Nano-institute, LMU Munich we are deeply involved in the ultrafast spectroscopic and spatially resolved experiments to gain a detailed understanding of the microscopic electronic and vibrational processes in several novel materials and nanosystems including hybrid perovskite nanocrystals (PNCs). Photoexcitation of such PNCs with an ultrashort laser pulse can produce coherent phonons along the lattice displacement coordinate, leading to lattice vibrations. To get a comprehensive insight, it is important to unravel how the type of both central organic moieties and inorganic metal halide octahedral cages individually contribute to the combined lattice dynamics. The recent collaboration between our group in LMU Munich and a group in Skoltech, Moscow reports the halide-ion-dependent vibrational coherences in formamidinium lead halide (FAPbX3, X=Br, I) PNCs via the combination of femtosecond pump-probe spectroscopy and density functional theory (DFT) calculations.

At first, we prepared colloidal FAPbX3 PNCs using the hot–injection method and performed optical pump-probe measurements by the excitation with an above-bandgap 400 nm pump. To our surprise, on top of the carrier dynamics, the time trace of the negative differential absorption signal (DA) due to the phase-space-filling shows a periodic oscillation in the time domain. These oscillations are attributed to vibrational wavepackets due to the formation of the coherent phonons arising from the lattice displacement upon excitation with an ultrashort pump laser. The wavepackets then start to oscillate centering at the equilibrium position of the potential, and results in modulation of the probe transmission at the frequencies of the lattice vibrations, and appeared as the time domain oscillations in the DA signal. The Fourier transformation of the residual oscillating signals results in the underlying vibrational frequencies of an inorganic lattice.

The fast Fourier transform (FFT) power spectrum of the FAPbX3 PNCs exhibiting a distribution of the vibrational features mostly below 150 cm−1 and the dominant contributions are attributed to the Pb–X bending and stretching modes of PbX64- octahedral units of the lattice. For FAPbI3 PNCs, along with the red–shift in the frequencies, additional vibrational modes get activated at frequencies >75 cm-1 as compared to FAPbBr3, which can be well described by the higher harmonics (overtones or combination bands) of their fundamental frequencies. The redshift is caused by the higher inertia for lattice rearrangement of the PbI64- sublattice as compared to relatively lighter PbBr64-. The calculation (via DFT) predicts the rotational energy barrier for the FA molecule inside the octahedral interstitial cage in FAPbBr3 is three times higher than in FAPbI3 (0.25 eV vs. 0.08 eV). Due to the larger cavity size (where the FA+ sits) in FAPbI3, the interaction of the inorganic framework with the FA moiety is weaker than in FAPbBr3 (Fig. 1a). This weakening allows for the intrinsic anharmonicity of the inorganic framework to be revealed, facilitating the energy transfer into overtone and combination bands. Therefore, the appearance of higher harmonics in FAPbI3 PNCs may likely due to a more anharmonic character of PbI64- compared to PbBr64- because of the strong coupling within their fundamental phonon modes (Fig. 1b). Importantly, our control experiment in MAPbBr3 revealed the energy transfer between the framework phonons due to the intrinsic anharmonicity of the lead-halide framework is indeed influenced by the interaction between the framework and the organic molecules, as well as by halide nature. The results provide the fundamental insight into the interaction between the framework and the organic molecules that can address several fundamental experimental properties of such PNCs. For example, the reduced interaction of the FA cation with the Pb-I sublattice leads to a more fragile Pb-I sublattice due to its free vibration and therefore, can be correlated with the lower stability of iodide (FAPbI3) compared to bromide (FAPbBr3) perovskites. Effects of halide nature on the interaction between the framework and the organic molecules can also explain the lower charge–carrier conductivity of FAPbBr3 compared to FAPbI3, where the enhanced interaction of the FA dipoles with the PbBr64- framework results in an increase of carrier scattering.

The project was first started in 2018 when time-domain oscillations were observed. It was challenging from the beginning and required theoretical collaborations to understand the actual origin of the wavepackets. Although lattice anharmonicity in perovskites has been theoretically predicted before, we are confident that our experimental detection of an intrinsic anharmonic character associated with the lead-halide framework will be of interest to a broad audience from the fields of physics, chemistry, materials science, and device engineering.

To learn more about how the organic molecule interacts with the lead-halide framework and how it influences its intrinsic lattice anharmonicity, have a look at our new paper just published in Nature Communications: Coherent Vibrational Dynamics Reveals Lattice Anharmonicity in Organic-inorganic Halide Perovskite Nanocrystals. https://www.nature.com/articles/s41467-021-22934-2 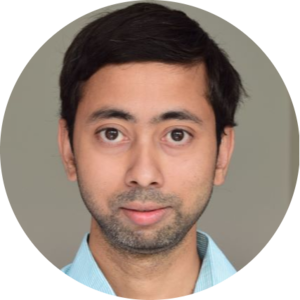