Interactions arising from ligand-receptor bonds are often chosen by nature to achieve selective recognition in a very robust way which we are still striving to mimic in applications. As we explain here, the key might be exploiting the behaviour of the combinatorial binding entropy.

Nature is incredibly good at achieving highly-selective recognition. Think about antibodies, which (when functional) only bind their target pathogen. Or viruses, which can easily enter into some specific cells, but not others. In the aforementioned cases, so-called "multivalent" interactions are involved, that is, interactions arising from the formation of multiple ligand-receptor bonds. Considering we are dealing with multiple bonds that can form in a large number of configurations, it should not come as a surprise that statistical mechanics has been crucial to unravel the physics behind binding selectivity. In fact, I believe the design principles arising from our increased understanding will have a disruptive impact on a number of applications. For example, the success of drug delivery and biosensing crucially depends on the level of selectivity that can be achieved. The investigations leading to our paper started against this background. 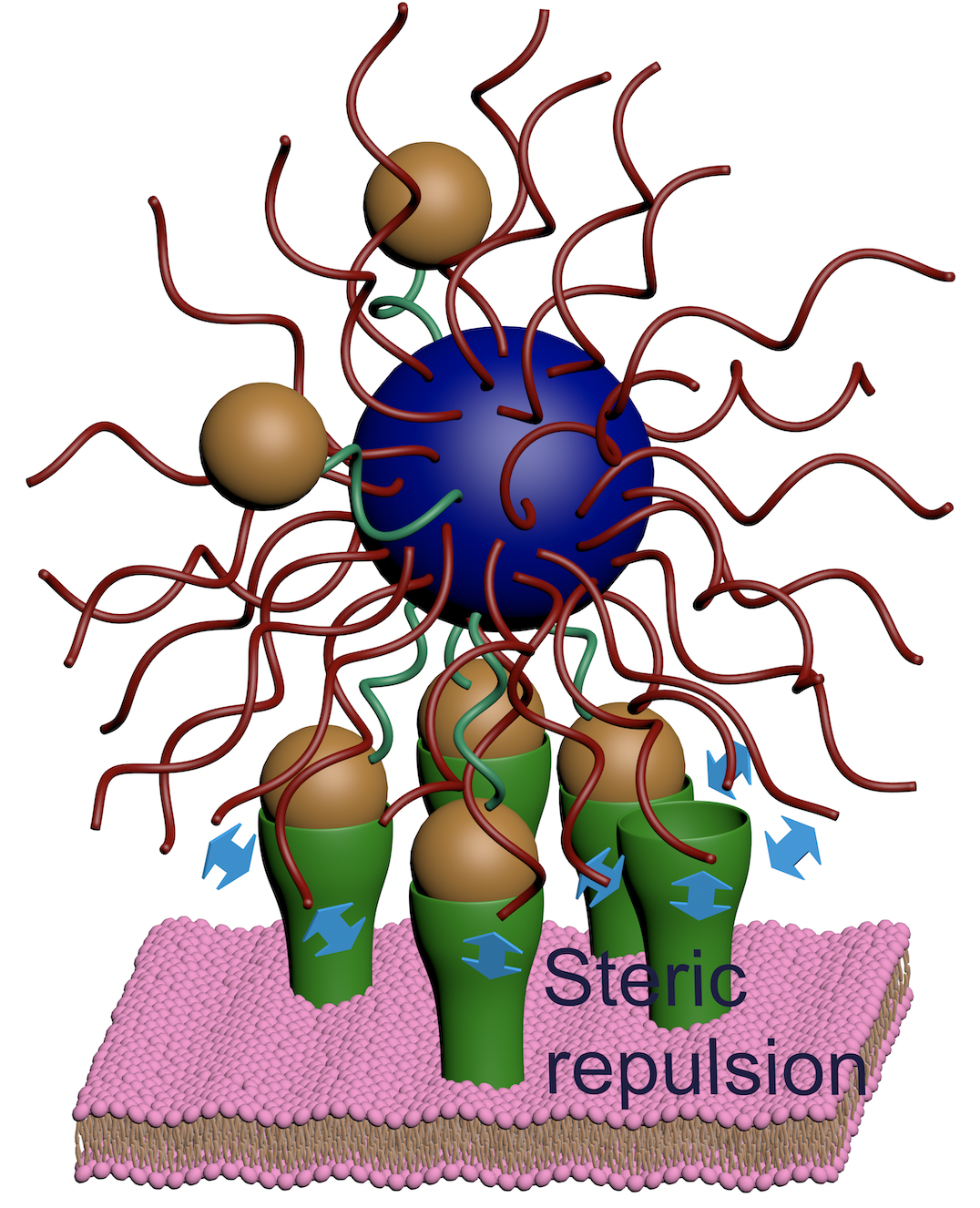 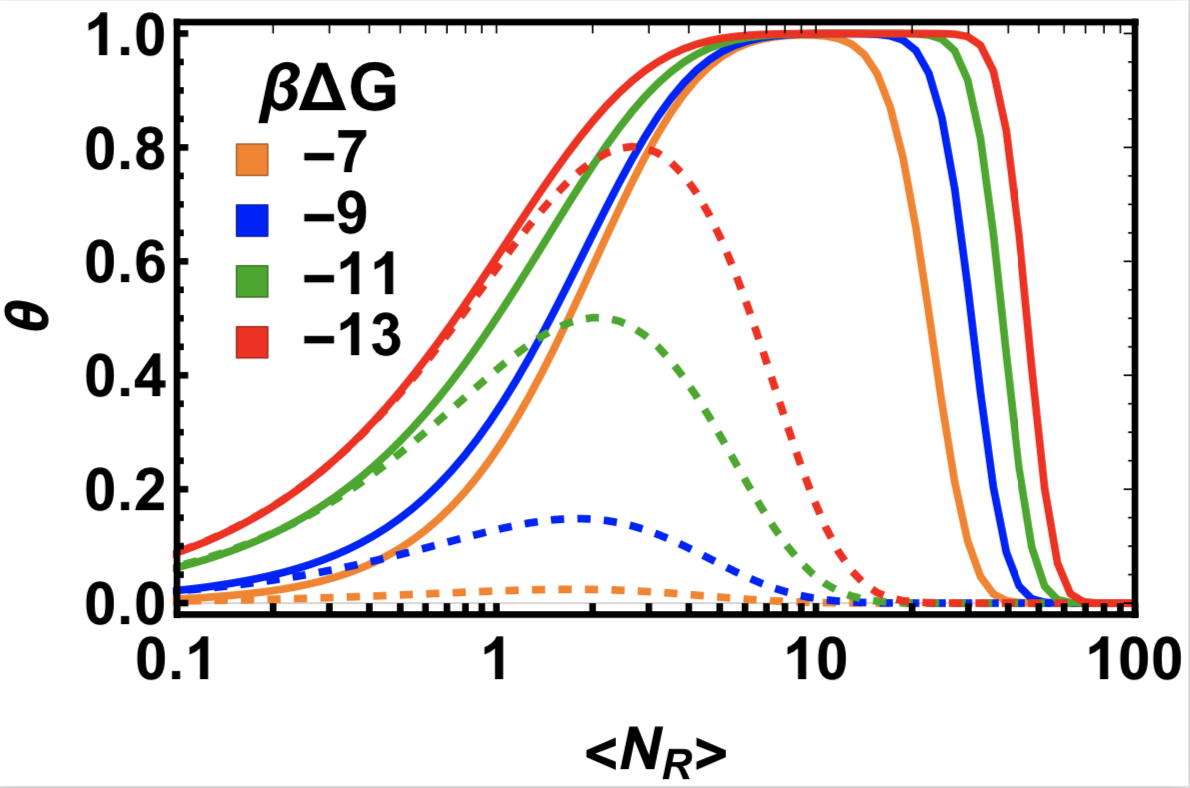 In 2017, interested in some of our theoretical work on multivalent interactions, Prof Giuseppe (Beppe) Battaglia from University College London contacted me and our groups started to collaborate. One day, while doing some numerical simulations for one of his experimental systems, I noticed that something unexpected came up. My theoretical model showed that for certain parameter values, binding between two multivalent objects would only occur for a specific range of ligands ( or receptors ), what we dubbed in our paper "range selective binding". This was strange: too few ligands and no binding should occur, which is almost obvious…but why also when the number of ligands is above a certain threshold? I knew that something similar is often observed when ligands are so close to each other that they can act in an anti-cooperative way. However, this was not our case. In fact, it was physically impossible in our system, so there must have been a different explanation. I started with the simplest one: a bug in the code used for the numerical simulations! For this reason I asked my PhD student, Liu Meng, to check the code. He did and he found nothing strange, all the formulas implemented were correct. I asked him to check again, same answer. We went through it together once more, and the result persisted. I thus asked him to do a full parametric study and calculate binding curves for many different scenarios...and the strange behaviour now seemed ubiquitous, popping up invariably again and again. Against all this evidence, I eventually convinced myself this was not a bug. In fact, the recurring appearance of this behaviour pointed to a very robust phenomenon. Intrigued, I decided to focus on this enigma until I could find a simple physical explanation, and finally...Eureka! It was just due to the incredibly slow growth, logarithmic, of the combinatorial entropy of binding once the number of ligands is higher than that of receptors, a behaviour "hidden" in the somewhat complex formulas describing the free-energy of binding. Once this was understood, however, everything fell into place and it all became pretty clear, almost trivial. So trivial, that I was sure this must already have been observed, it was too simple not to be. At the end, I talked to Beppe about this idea and I wanted to convince him to do some experiments but it was not necessary. During our discussion, he told me he already had some results he was sitting on because he could not make sense of…and they were showing exactly this behaviour!

Despite how sure we felt, it still took a while to get our ideas accepted and published. The reviewers asked us to do more rigorous checks and Beppe’s group was instrumental in this effort (in particular Azzurra and Laura, great collaborators!). Eventually, this extra effort also allowed us to take other phenomena into account, polydispersity in particular, but all confirmed our results and gave us even more confidence. It also gave us additional time to reflect and allowed us to understand even better what were their implications for applications. For example, one which I find particularly important is that our result imply that for any multivalent construct there must be an optimal number of ligands that maximises its binding strength with a target (and we even found a simple formula to estimate this optimal number!). For the same reason, this also leads to a lower bound for the detection limit achievable with biosensors based on multivalency.

We are now planning to investigate the significance of our results for various biological processes. Whereas proper results will surely take some time to arrive, we can at least make some speculation on how nature might be already using this form of non-monotonic binding to its own advantage (...or our disadvantage!). For example, could it be that cancer cells over-express some receptors to make it more difficult for other cells to bind, and thus remain "hidden" from the immune system? And could range selectivity explain why some viruses can easily infect certain groups of people, but not others?

To better understand all of this and why we are so excited about our results, read the whole paper in Meng, Apriceno et al, "Combinatorial entropy behaviour leads to range selective binding in ligand receptor interactions", Nat Commun 11, 4836 (2020). https://doi.org/10.1038/s41467-020-18603-5 (or just press the Read the Paper button at the top of this page!) 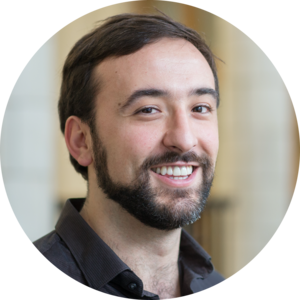