Deformation twinning in metals and alloys

We use three-dimensional synchrotron X-ray diffraction and crystal plasticity modeling to study formation and annihilation of twins in polycrystals. We show that at the early stages of plasticity, twins can be nearly as stressed as their corresponding parents, yet relax with further loading.

Due to their good mechanical properties, hexagonal close-packed polycrystals (HCP) are used in various industrial sectors. For example, zirconium alloys are widely used in nuclear industry and magnesium alloys are used in automotive industry. To determine the lifetime of engineering components, it is important to characterize the key parameters that control their mechanical behaviors. During service, these alloys carry thermomechanical loads which may cause both recoverable, also known as elastic, and irrecoverable deformation- known as plastic deformation. Understanding the underlying mechanisms that control the elastic and plastic responses of these alloys is very important because it will help develop numerical models that can provide better estimation of lifetime of engineering components.

The plastic response of an HCP alloy is generally controlled by two main mechanisms: slip which is the movement of line defects on particular plane and direction, as well as twinning which is reorientation of portion of a crystal. Characterizing formation of twins is challenging because unlike slip, twinning is a rapid process. In addition, once formed, with further loading twins thicken and grow in size while with reverse loading, they reduce in size and annihilate. Figure below shows an image of zirconium grains before and after deformation where several needle-shape twins and their parent grains are identified.

This study focuses on understanding the mechanisms that control formation and annihilation of twins in HCP alloys. Since engineering components are often exposed to cyclic loads, we decided to design an experiment where we would apply both compression and tension loads on the same specimen. This was very challenging because (a) we were required to rotate our magnesium and zirconium specimens 360 degrees to measure 3D diffraction patterns, (b) we needed to ensure that the specimens would not buckle under load and (c) we needed to avoid unmounting the specimens during load-unload-reload steps. The set-up of our experiment at the European Synchrotron Radiation Facility (ESRF) is shown in figure below.

To check when our specimens would buckle, we started our ex-situ experiments two days before the actual in-situ ones. We spent some time breaking a couple of specimens to understand when and how our specimens may buckle in an actual in-situ set-up. We started our experiments on day 3 and over the next 6 days we collected more than 4TB of diffraction data which needed lots of post-processing. An example of collected diffraction patterns for a rotating specimen is shown below.

We started the experiment with deforming a zirconium specimen the results of which are published in [1]. We applied only tensile load on this specimen, but we decided to focus on collecting as many data as we could at the onset of plasticity. This was to study the twins that are thin. We continued on with collecting some more data further into the plasticity zone to study thicker twins. For the magnesium experiment, we decided to run a compression test and check at what load the specimen would buckle in an in-situ set-up. This is because for collecting diffraction patterns at each data point we needed to hold the specimen for 2 to 5 hours.  We then ran the main compression-unload-tension experiment on the second magnesium sample and we used the experience we gained from the first experiment to avoid buckling. 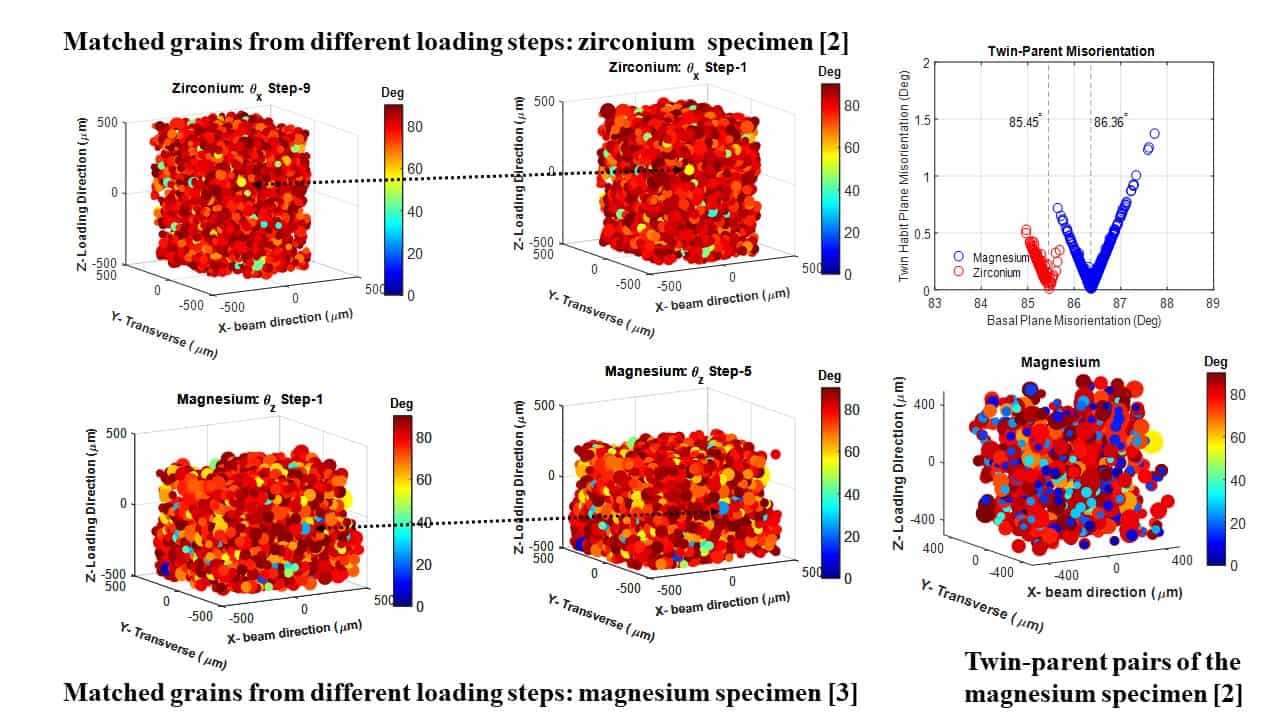 The analysis of collected data showed that we captured twin and parent pairs in both magnesium and zirconium  specimens. The figure above shows the indexed grains for the first and last loading steps of each specimen, and the results of our post-processing methods for matching grains as well as determining twin-parent pairs. We studied the relationship between the stress in the twin and that of parent grain and we realized that when twins are small (thin), they are nearly as stressed as their corresponding parent in the zirconium case. In the magnesium case, the twins were more stressed than their parents. To further understand the reason for the observed behavior, we used crystal plasticity modeling to simulate the local interaction between twin-parent pairs by developing a novel numerical model that can capture real twin geometry-see figure below. Our numerical modeling show that in the magnesium case because the twins were formed under compressive force and because their crystal c-axis were parallel to the loading direction, minimum plasticity was observed in the twins and hence twins are hard. In addition, our experiment show that with further loading and twin thickening, twins relax. One important conclusion we had from the load reversal experiment was that twins do not necessarily annihilate when the driving force in the parent is negative and part of the driving force is actually originating from the twin itself. 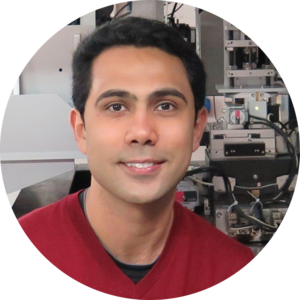