The Sêr SAM (Sustainable Advanced Materials) research group at Swansea University Department of Physics was founded in 2017 with support from the Welsh Government and European Regional Development Fund (ERDF) via the Sêr Cymru programme. In the following 24 months, physicists, chemists, and engineers from across the globe joined Sêr SAM working on next generation semiconductors, dielectrics and hybrid conducting materials for applications such as solar cells, photodetectors, light emitting diodes and bioelectronics. One of the main tasks for the first year of this programme was to establish the electro-optical laboratory for electrical and optical characterization. I joined the group in early 2018 as PhD student number 4 with the primary job of helping set up this new laboratory. My specific task was to establish automation and remote communication processes for different experimental measurement systems starting with the intensity dependent photocurrent (IPC) apparatus. IPC is a commonly used measurement technique to investigate photocurrent loss mechanisms such as recombination, or the build-up of space-charge, in thin-film solar cells, by probing the device photocurrent as a function of incident light intensity. The combination of wide-dynamic range light intensity attenuation, low-frequency modulated probe light, and low-noise photocurrent measurement allowed us to detect ultra-small variations in the intensity dependence of the device photocurrent. First, I conducted IPC measurements on a standard thin-film PCDTBT:PC70BM solar cell. Based upon the literature, I expected to observe a unity slope in the low and moderate intensity regime (due to first-order, absorption and generation photocurrent losses) when plotting the solar cell response (i.e., photocurrent) as a function of incident light intensity in a log-log plot. However, I detected two subtle, slightly shifted linear photocurrent versus light intensity regimes in the low and moderate intensity windows. These previously-undetected linear trends were now visible because of the high sensitivity of the IPC apparatus. When plotting, alternatively, the external quantum efficiency, defined as the efficiency at which the incoming flux of photons is converted into a photocurrent of electrons and holes, against the incident light intensity (in a log-log plot), the two linear photocurrent regimes then translate into two constant EQE plateaus – one at low intensity with high magnitude, and a second plateau at moderate intensity with lower magnitude.

Interested by this previously unobserved finding, Dr. Oskar J. Sandberg, a Postdoctoral researcher in our group, joined the project to investigate the findings from theoretical and numerical perspectives. After conducting drift-diffusion (DD) simulations, initial insight was shed into the real origin of the subtle step between the two linear photocurrent regimes in the low and moderate light intensity regimes. 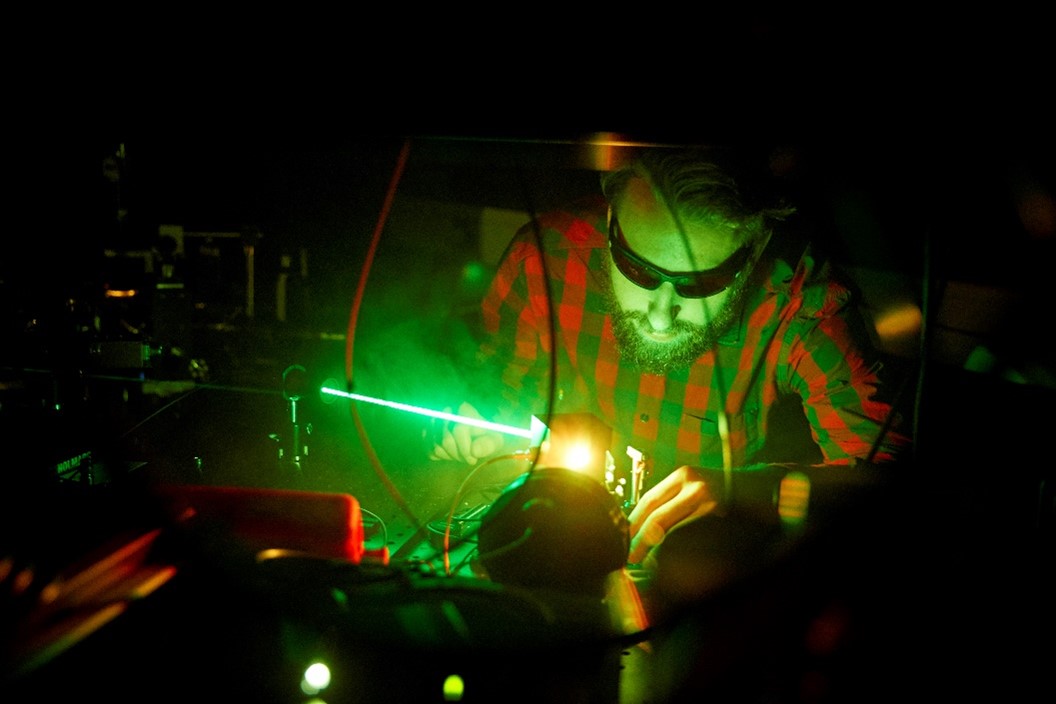 It turned out that this unique two-step behaviour is caused by trap states situated in the donor: acceptor bulk leading to first-order, trap-assisted recombination being switched on at moderate light intensities. Based upon the DD simulation model and Shockley-Read-Hall statistics, which is commonly used to describe the recombination via trap states, Dr. Sandberg developed a theoretical model which allowed the depth to be determined from intensity dependent photocurrent measurements. Dr. Wei Li and Dr. Nasim Zarrabi, both Postdoctoral researchers in the group, fabricated a large variety of fullerene and non-fullerene organic bulk-heterojunction solar cells, while I conducted sensitive, wide-dynamic range IPC along with other complementary measurements. We found trap states to be universally present in organic solar cells situated 0.35 – 0.6 eV below the transport level edges. These trap states not only induce noticeable photocurrent losses, but also limit the open-circuit voltage, and give rise to light ideality factors ranging between 1 and 2. 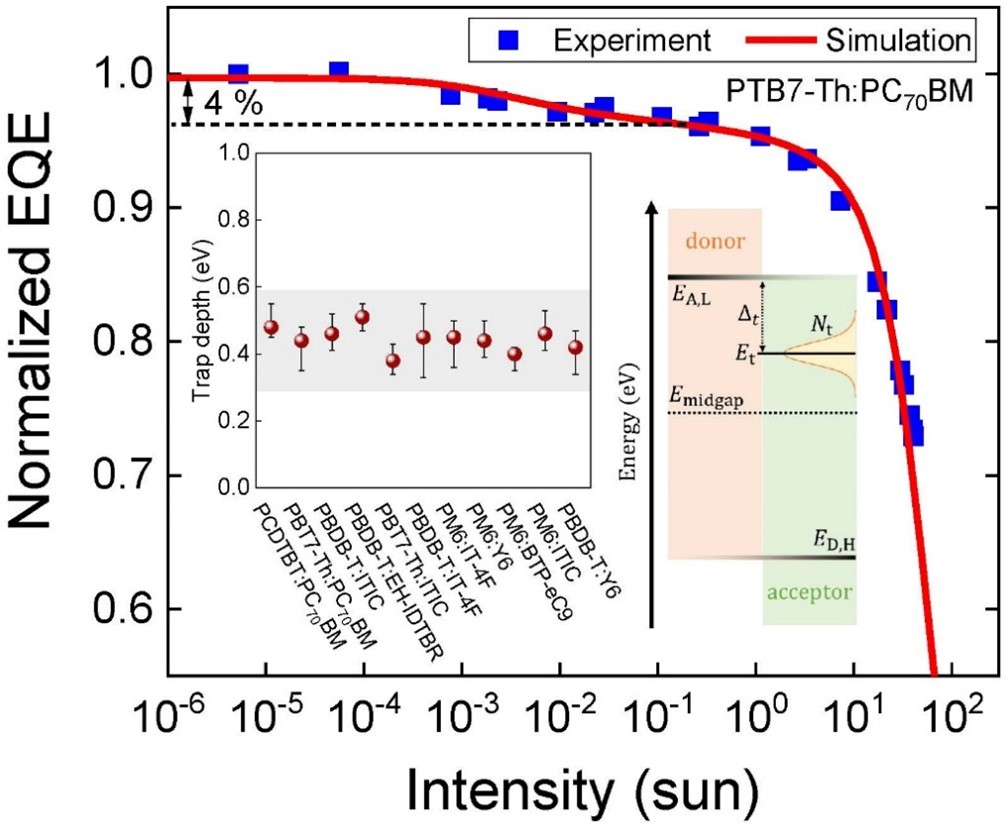 Our findings have not only important implications for organic solar cells operating under 1 sun conditions, but also for indoor light-harvesting devices and photodetector applications, which both operate at much lower light intensity.

If you are curious to read and learn more about our work on the nature, dynamic and role of trap states in organic thin-film solar cells, and its relation to other, recent observations of universally present charge-generating mid-gap trap states in organic solar cells based upon ultra-sensitive EQE, please refer to our article recently published in Nature Communications: