Exciton transport in 2D perovskites: Visualizing the flow of energy in a soft semiconductor

We directly image how excitons diffuse through 2D metal-halide perovskites and measure how fast and far they travel. Surprisingly, we find that small variations in chemical composition can have a tremendous influence on excitonic transport due to changes in the softness of the perovskite lattice.

Over the last decade, metal-halide perovskites have stormed into the field of solar harvesting as a somewhat magical material that fulfills almost every checkbox on the solar-cell material wish-list. However, one missing key ingredient is chemical stability, posing a major challenge for the real-world and long-term applicability of the material. A promising route to tackle the stability issue is the use of lower dimensional perovskites such as two-dimensional (2D) perovskites, which show a better resistance towards degradation (Fig. 1 shows the in situ growth and crystal structure of 2D perovskites). Reduced dimensionality, however, significantly alters the photophysical properties of the perovskites. Importantly, rather than acting as free carriers, electrons and holes are bound to each other and travel through the material as neutral pairs called excitons. The exciton-binding energy of these materials is in some cases so high that excitons can only be split up into electrons and holes at charge separation sites. To guarantee that every absorbed photon can also contribute to the energy generation in a solar cell, excitons need to diffuse far enough to reach such sites. This makes charge separation and energy extraction much more challenging and it is somewhat of a surprise that 2D perovskite based solar cells work as well as they do (above 18% for phase pure 2D and 22% for 2D/3D mixed perovskites).

As a result, the goal we had in the beginning of this study was to find out just how fast and how far excitons travel in 2D perovskites - and to see how those characteristics change by variations in their chemical composition.

Having just arrived to Madrid, we started in 2018 with a freshly painted laser lab and an empty optical table to build up our transient photoluminescence microscopy (TPLM) setup. Our team lead, Ferry Prins, was part of the MIT team that originally developed TPLM back in 2014, composed of members of the groups of William Tisdale and Vladimir Bulovic. TPLM is uniquely suited to map exciton diffusion in the brightly emitting 2D perovskites. Meanwhile, newly joined PhD student Michael Seitz had gained quite extensive expertise in 2D perovskite synthesis as an undergraduate student, not completely coincidentally with some of the same members of that MIT consortium. TPLM uses short laser pulses to excite excitons and can detect how far excitons travel before they decay radiatively by emitting a photon. By taking the time from exciton creation to radiative decay one can calculate how fast excitons are moving. Instead of taking a single laser pulse, TPLM averages over several tens of billions of pulses to determine the average distance and speed traveled by excitons. Fig. 2 illustrates the TPLM measurement technique that we used for diffusion imaging.

Measuring exciton diffusion in perovskite was surprisingly easy, and we obtained very nice results on the very first try. In retrospect, we were lucky to start with (PEA)2PbI4, which happens to be one of the most diffusive of all compositions that we tried. We observed that excitons in (PEA)2PbI4 travel fast initially – within one nanosecond they cover 300 nm, which is equivalent to around 1000 km/h or 600 mph – and then start slowing down at later times. We find that the deacceleration of diffusion at later times is caused by trap sites – crystal imperfections – which slow down the excitons. It turns out that these trap sites can easily be filled with a background illumination that produces a constant distribution of excitons, which can fill the traps. With a 2 Sun illumination we do not observe trap limited diffusion at all within the first 10 ns. This efficient trap state filling could be a reason why perovskite solar cells are not hugely influenced by trapping sites as traps can be efficiently filled through the constant illumination with sunlight. Thanks to a very fruitful collaboration with the group of Rafael Delgado-Buscalioni at the theoretical physics department of our faculty, we were even able to quantify the trap state filling using Brownian modeling and deepen our understanding of the impact of trapping sites on exciton diffusion in 2D perovskites. One big advantage of metal-halide perovskites is their versatility. Properties like, for example, the bandgap can be readily changed by adjusting the chemical composition of the perovskite. As a first test we changed the organic spacer molecules that separate the sheets of the inorganic perovskite lattice (green molecules in Fig. 1bc). For this, we exchanged phenethylammonium (PEA) for butylammonium (BA), which is another very commonly used spacer molecule for perovskites. As (BA)2PbI4 and (PEA)2PbI4 are known to have similar properties, we did not expect a big difference in the diffusivity of the two. However, we observed that excitons travel around ten times slower in (BA)2PbI4 than in (PEA)2PbI4 (Fig. 3a). This finding was surprising since these organic spacers are not known to greatly modify the optoelectronic properties of 2D perovskites, as the top of the valence band and the bottom of the conduction band are formed by the inorganic part of the perovskite (PbI4) and not the organic spacers.

However, the organic spacers do have an indirect influence on the optoelectronic properties by causing slight changes in the tilt angle between the inorganic metal-halide octahedra. As a result, our first naïve hypothesis was that BA perhaps led to a bigger distortion of the metal-halide octahedra, which would yield a higher effective mass of the excitons, thereby reducing their speed. However, the opposite is true. The metal-halide octahedra are less distorted in (BA)2PbI4 and should therefore give a larger diffusivity. Since the electronic band structure could not explain the differences, we decided to look more closely at phonon scattering for our next hypothesis. Phonons are known to scatter charge carriers in semiconductors and are also known to be particularly relevant in a soft lattice such as that of a perovskite. Indeed, having a closer look we found that exciton-phonon interactions are larger for BA than for PEA. By looking at the atomic displacement of the perovskites – how far atoms move from their equilibrium position at room temperature, which can be extracted from previously reported single crystal X-ray crystallography of these materials – we find that the atoms in (BA)2PbI4 move much more than in (PEA)2PbI4. With BA being a skinnier ligand than PEA there is enough space for the atoms to move leading to a much “floppier” crystal than compared to PEA, which is more rigid due to its bulkier form that does not allow for much movement. Extending these measurements for other ligands, we indeed find this correlation to hold for each one of them (Fig. 3b).

These results are very promising as they indicate that structural rigidity can be used as an ab initio design parameter for optimized exciton transport characteristics in 2D perovskites. Considering the close correlation between diffusivity and the atomic displacement, this parameter space can be readily explored readily using available X-ray crystal structure data for many 2D perovskite analogues.

How to record single molecules on a loop.

Bridging the Gap between Halide Perovskites and Two-dimensional Semiconductor Heterostructures 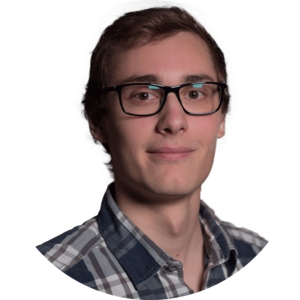