Plasmonic Laser Nanosurgery (PLN) is a novel photomodification technique that exploits the near-field enhancement of femtosecond (fs) laser pulses in the vicinity of gold nanoparticles.

+1
Adela Ben-Yakar and 1 other See all
Professor, University of Texas at Austin
Follow 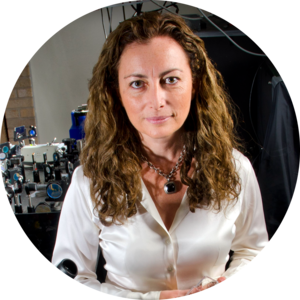 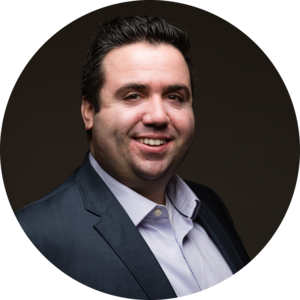 “Dynamite with a laser beam” (a phrase introduced in the song Killer Queen by the band Queen in 1974) has become a hip way to say something is awesome. As there is nothing is more awesome than the power of the femtosecond (fs) laser, Killer Queen quickly became the unofficial theme song of the Femtosecond Plasmonic Laser Nanosurgery (fs-PLN) project. It is well known that precisely targeted fs lasers can be utilized to achieve nano-scale precision in ablating both biological and solid materials. However, due to precise focusing requirements, fs laser use is restricted to small scale research applications.

We embarked on this research to show that easily synthesized spherical gold nanoparticles hold much promise in the development of fs laser phototherapies due to their ability to act as a local field enhancer at off-resonant wavelengths, substantially reducing the threshold for photomodification. Targeted to a molecularly specific moiety and suddenly fs-PLN can be performed rapidly over a large volume of cells without the need for tight focusing on the desired target. More importantly, the substantial ablation threshold reduction enables ablating deeper in a highly scattering tissue by reducing the probability of out‐of‐focus photodamage due to self‐focusing 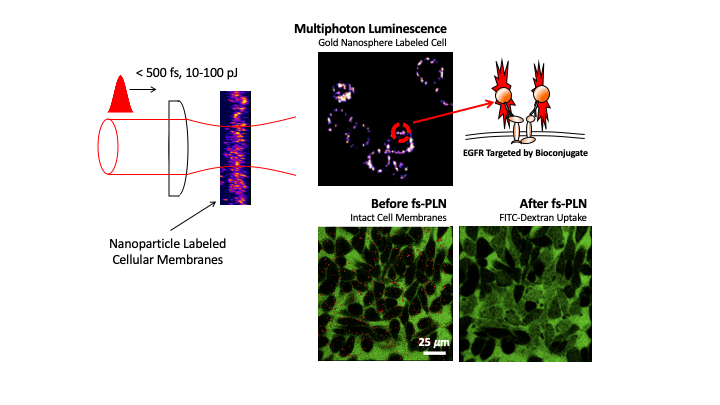 Prior to our work in MDA-MB-468 triple-negative human epithelial breast cancer cells, we first demonstrated the ablation of silicon and glass by 150 nm gold nanoparticles excited by a single near-infrared fs laser pulse. After ablation, the silicon surface was permanently “etched” in the shape of bipolar scattering events. Probing their depth with AFM, we were able to elucidate the relationship between pit depth and laser fluence. Only a steppingstone, we quickly moved onwards to growing cells and creating bioconjugates (antibodies conjugated to the particle surfaces).

As with many scientific inquiries, first experimental results came unexpectedly.  While we rather quickly confirmed EGFR conjugation to the gold nanoparticle surface with spectroscopy, many months were spent unsuccessfully looking at dark images void of any multiphoton luminescence signal. On the chance multiphoton luminescence was observed, it did not present in the characteristic ring pattern associated with targeted surface EGFR labeling. Ironically, it’s these moments the U2 song “I still haven’t found what I’m looking for” seems to invariably get stuck in one’s head. As the conjugation protocol can take a hefty 8-hours to complete, at some point, frustration can and did start to set in. When this point came, we abandoned our perceived understandings and incubated cells with what we thought to be a high concentration bioconjugate solution. With this simple change, suddenly rings of strong multiphoton luminescence were displaying upon laser excitation. Highly encouraged, membrane impermeable FITC-Dextran was added to the extracellular space and we proceeded to pummel three square regions of cells with 10s of mW of laser energy. After a quick wash, cells were transferred to a standard epifluorescent microscope, where we excitedly viewed three well-defined and highly fluorescent squares of cells. Apart from those three squares, no other cells fluoresced. Success! these cells were optoporated! – and yes, this warranted a celebratory trip to the local pub for a round of beers. From this point we were able to refine our labeling and optoporation experiments to elucidate the relationship of laser fluence and FITC-Dextran uptake in cells exhibiting randomly clustered nanoparticles along its surface. Great measures were taken to directly track individual cells and prevent wash off throughout each experiment. To this end, we developed a new method ensuring cellular adherence to glass surfaces and protocols were designed such that extracellular FITC-Dextran could be dispensed and washed without moving the sample from multiphoton microscope. Optoporation efficiency was shown to depend on labeling concentration as well as the naturally occurring EGFR endocytic trafficking cycle. Finally, we revealed fs-PLN at the 80 MHz laser rep rate is based on the formation and accumulation of long-lived ROS.

Fs-PLN is an exciting technique. By letting the nanoparticle “focus” laser light, fs lasers have great potential for in vivo clinical use in the large-scale phototherapy in bulk structures such as dysplasia and tumors with no to minimal damage to surrounding, non-targeted regions.