Lithium-ion batteries, recognized with the Nobel Chemistry Prize in 2019, are critical for consumer electronics, electric vehicles and stationary storage. Further improvements of the energy density of Li-ion batteries are a grand challenge within the field. Li metal is considered the ultimate anode for next-generation batteries due to its high theoretical capacity (3,860 mAh g–1) and low reduction potential (–3.04 V versus the standard hydrogen electrode).

However, the excessive capacities and thickness of the available Li metal foils remain a critical challenge in this field. A practical Li metal battery (LMB) requires a thin Li metal foil with an areal capacity of less than 4 mAh cm-2 to pair with common lithium transition metal oxide cathodes (having an areal capacity of 3 to 4 mAh cm-2), while the conventional Li-ion batteries call for an even thinner Li metal foil (≤5 μm thick) to ideally compensate the SEI formation-induced Li loss during first cycle in anode. But existing extrusion-based fabrication technologies are capable of producing Li metal foils with thicknesses of only 20 to several hundreds of micrometres, due to the challenges of mechanical fragility and micro-scale manufacture capability. A simple and low-cost process for preparing free-standing thin Li metal foils is a critical and unresolved challenge that requires a new technology.

Here, we developed a process that generates an ultrathin, free-standing Li metal foil. First, we use a tunable calendaring process to decrease the thickness of a reduced graphene oxide (rGO) to 0.3 to 20 μm. We then load metallic Li by edge-contacting molten Li to the rGO. As a result, Li is distributed inside the internal channels of the rGO while the rGO retains the micrometre-scale thickness. The thickness of the obtained Li foils ranges from 0.5 to 20 μm (corresponding to ultralow areal capacities of 0.089 to 3.678 mAh cm−2), which breaks the limitations of commercially available Li films (20 to 750 μm thick, 4 to 150 mAh cm−2 capacity). Moreover, our Li foils also exhibit increased mechanical strength (525% increase in hardness for resisting permanent plastic deformation), free-standing ability and flexibility. 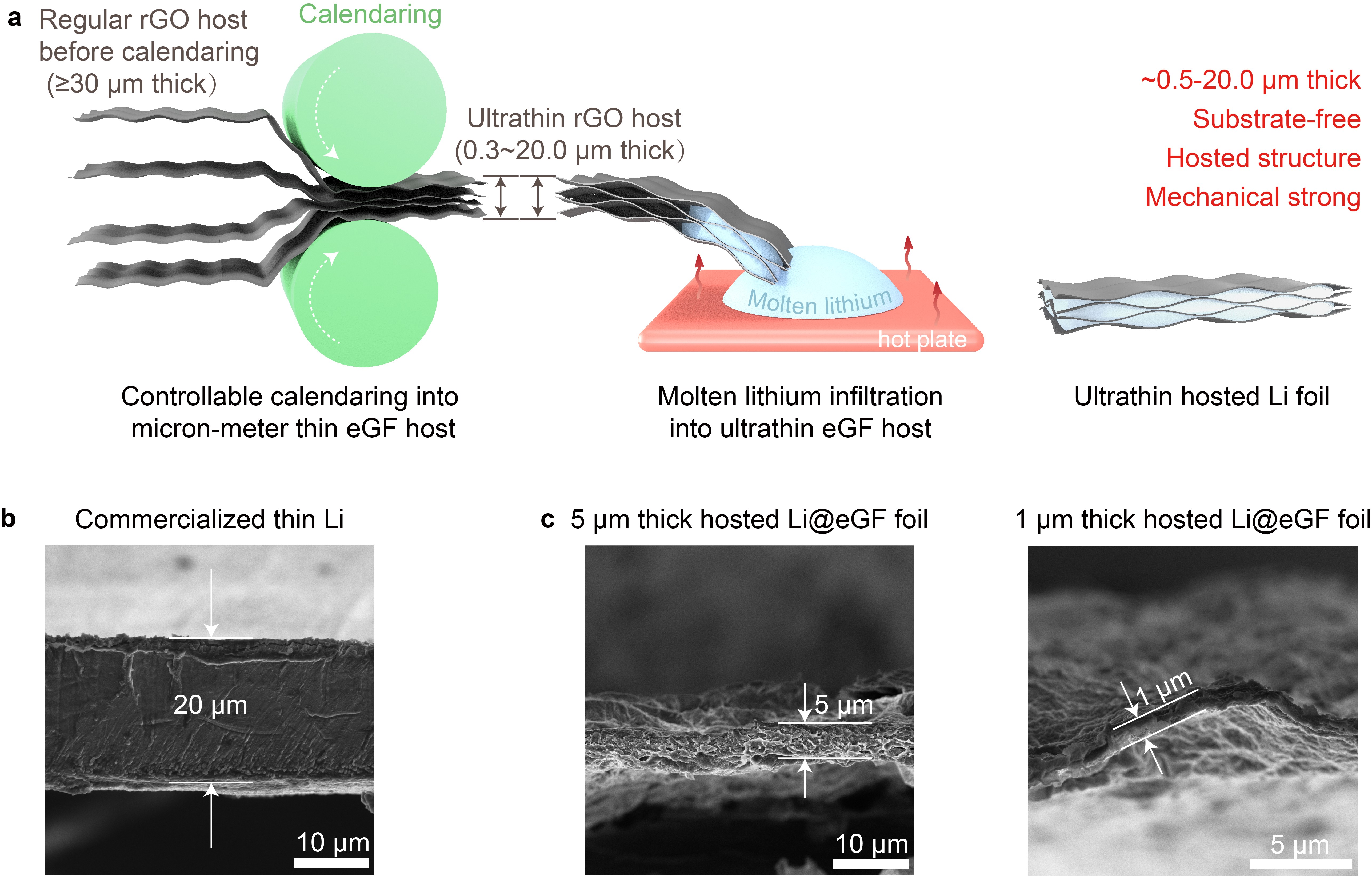 The advantages of the 3D lithiophilic host, micrometre-level thickness and improved mechanical strength make this Li@eGF film a strong candidate as a thin and stable Li metal anode for practical high-energy-density Li metal battery. In practical Li metal battery with thin Li metal anode, fast battery failure was always observed at early cycles, because uneven stripping-induced cracks rapidly separate the original thin Li metal anode into several parts of ‘dead Li’ and disconnect large pieces of the active Li metal electrode material from the final tab current collector, long before depletion of active materials. Replacing the pure Li metal film with a 20-μm-thick Li@eGF film greatly improves the cycling stability, attributed to its unique characteristics: (1) the uniform distribution of metallic Li in the 3D lithiophilic rGO matrix suppresses the inhomogeneity of local current density; (2) the low weight ratio and high conductivity of the rGO matrix provides a current-collecting function, even when Li metal species are all stripped away; and (3) the high mechanical strength of the Li@eGF also suppresses the inhomogeneous electrochemical plating and stripping during cycling.

Figure 3 a, Galvanostatic cycling of Li metal || lithium iron phosphate (LFP) pouch cell with ultrathin Li foil and Li@eGF film with initial two activation cycles at 0.05 C and long cycling at 0.5 C. b, Digital camera photos of 20-μm-thick pure Li foil before and after 20 cycles in pouch cell, showing that non-uniform cracks and fissures were gradually broadened to rupture the original film. c, Digital camera photos of 20-μm-thick Li@eGF film before and after cycling in pouch cell, showing absence of crack.

By reducing the electrode thickness to the micrometre scale and improving anode stability simultaneously, our tunable micrometre-thin and free-standing Li@eGF film provides a pathway for future high-energy-density Li batteries. It also suggests that this micrometre-scale technology could break the limitations of electrode thickness in current manufacturing.