We proposed the concept, theoretical model and practical implementation of a full-duplex reflective metasurface exhibiting nonmagnetic nonreciprocal wave amplification and beamsteering. The metasurface architecture is composed of an array of chains of series cascaded radiator supercells.

Nonreciprocal structures introduce different responses under the change of the direction of the incident field. Such nonreciprocal platforms are one of the key elements of modern full-duplex wireless telecommunication systems. The advent of metasurfaces over the past decade has resulted in remarkable advances to ultra compact nonreciprocal apparatuses. Conventionally, ferrite-based magnetic materials have been used for nonreciprocity realization. Such magnetic materials, however, are cumbersome, costly, incompatible with printed circuit board technology, and unsuitable for high frequencies. In our recent work, we have proposed an architecture in which a metasurface is formed by a set of active and nonreciprocal chains. The proposed nonreciprocal reflective metasurface represents an original and efficient nonmagnetic apparatus for full-duplex nonreciprocal beamsteering and amplification (Figure 1a).

Our work has answered two key questions: (i) How to create a reflective beamsteering metasurface? (ii) How can nonmagnetic non-reciprocal signal amplification be achieved?

(i) How to create a reflective beamsteering metasurface?

We propose a reflective surface comprising chains of cascaded supercells. Each chain of this metasurface is composed of cascaded supercells. These supercells are formed by a set of gradient reciprocal phase shifters, unilateral transistors, and single-fed and double-fed microstrip radiating patch elements (Figure 1b). The patch antenna elements are double-fed microstrip patch antennas to allow the flow of the reflection of power in the desired direction inside the metasurface. However, the first and last patch antenna elements are single-fed patches.

In the forward problem, the incoming wave from the right side impinges on the chains of the metasurface under an angle of incidence which is inside the reception beam of the metasurface. The reception beam of the metasurface is determined by the gradient phase shifters in each supercell. Hence, the wave is received by the chain, acquires a power gain and is reflected at the desired angle of reflection, instead of the specular reflection angle as in conventional reciprocal reflective surfaces. In contrast, in the backward problem, the incoming wave from the left side impinges on the metasurface under an angle of incidence which is outside the reception beam of the metasurface. Therefore, the wave is not received by the metasurface and is reflected without significant reflection gain or with loss.
The metasurface integrates a dielectric layer sandwiched between two conductor layers. The bottom conductor layer acts as the ground plane of the patch antenna elements and also includes the direct current (DC) signal path of the unilateral circuits. The top conductor layer includes patch antenna elements, transistors, and phase shifters. The dielectric layer separates the two conductor layers from each other. The transistor radio frequency (RF) circuit includes two decoupling capacitors, and the DC biasing circuit of the transistor includes a choke inductor, two bypass capacitors and one biasing resistor. A DC signal biases the transistors to create a gradient nonreciprocal phase shift profile.

(ii) How can nonmagnetic non-reciprocal signal amplification be achieved?

The proposed metasurface can be mounted on a wall or on a smart device in a seamless way. Such surfaces are capable of massive MIMO beam-forming, as no excessive RF feed lines and matching circuits are required. Additionally, the metasurface functionality and operation can be fully controlled and programmed via biasing of unilateral devices and phase shifters, as well as tunable patch radiators. Highly directive and reflective full-duplex nonreciprocal-beam operation is a very promising feature of the proposed metasurface to be utilized for a low-cost high capability and programmable wireless beam-forming. The metasurfaces can become the core of an intelligent connectivity solution for signal enhancement in WiFi , cellular, satellite receivers and IoT sensors. It provides fast scanning between users while providing full-duplex multiple access and signal coding.

The Effect of Water on Colloidal Quantum Dot Solar Cells 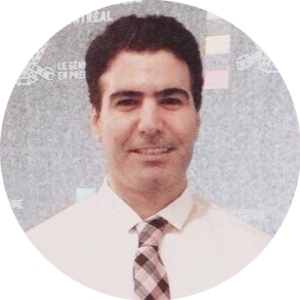 Sajjad Taravati (IEEE Senior Member) received his Ph.D. degree in electrical engineering from Polytechnique Montreal, Montreal, QC, Canada, in 2017. From 2007 to 2010, he was a Scientific Researcher with the Iran Telecommunication Research Center, Tehran, where he was involved in the design and practical implementation of novel telecommunication transceivers and electromagnetic wave propagation in wireless systems. Dr. Taravati was a full-time faculty member at Raja University, Ghazvin, Iran, from 2011 to 2013, where he was teaching various courses in telecommunication engineering for undergraduate students and supervising undergraduate theses. From 2013 to 2017, he was a Ph.D. Student and a Research Assistant at the Poly-Grames Research Center, Polytechnique Montreal, where he was conducting research on nonreciprocal magnetless electromagnetic systems and analog signal processing. From 2017 to 2018, he was a Postdoctoral Fellow in the group of Prof. Ahmed A. Kishk at the Concordia University, Montreal, Canada, where he was conducting research in the field of electromagnetics, nonreciprocity and space-time modulation. In Nov. 2018, Dr. Taravati joined the group of Prof. Eleftheriades at the University of Toronto, Toronto, Ontario, as a Postdoctoral Fellow. From 2020 to 2021, he was an Adjunct Professor at IKIU, Ghazvin, Iran, where he was teaching online courses in telecommunication engineering.

Dr. Taravati is currently a Post-Doctoral Fellow at the University of Toronto, Toronto, Ontario, Canada. He is also the Technical Advisor at LATYS Intelligence (latys.ca), a start-up company that is supported by the well-known start-up incubator TandemLaunch Inc. and is established based on two of Dr. Taravati’s research work and patents on versatile and programmable active metasurfaces. His current research interests include all fields of electromagnetic structures, electronic circuits, antennas, nonreciprocal magnetless systems, space–time-modulated structures, electronic circuits and systems, broadband phase shifters, wave engineering, airborne telecommunication transceivers, analysis and design of microwave active and passive circuits, radio modules, antennas, electromagnetic theory, invisibility cloaking, and active and nonreciprocal metasurfaces. Dr. Taravati received the Khwarizmi International Award in 2010 and the Outstanding Researcher Student Award of IUST in 2012. In 2018, he received the Horizon Postdoctoral Fellowship and the Graduate Student Award both from the Concordia University, Montreal. Dr. Taravati is elevated to the grade of IEEE Senior Member in 2021. He is a speaker of the 2021 Student Chapter of the IEEE Antennas and Propagation Society, and speaker and organizer of a workshop at the 2021 IEEE International Microwave Symposium, Atlanta, GA, USA.