Insight into ultrashort pulse formation and collision in fibre lasers

Bidirectional ultrafast fibre lasers are notoriously difficult system to study. The primary target of our work was to shed light on the nature of nonlinear interaction and formation of ultrashort pulses in these lasers to enhance technological platforms for self-navigation and dual-comb spectroscopy 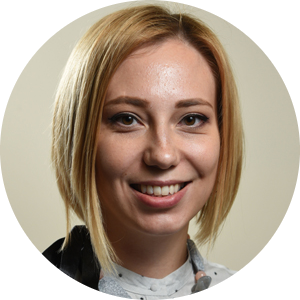 Our 3-year research journey into the physics of bidirectional mode-locked fibre lasers has started with studies of fibre laser gyroscopes. As a strategy to eliminate or significantly decrease the interaction between counter-propagating beams and mitigate the well-known lock-in effect that plagues continuous-wave gyroscopes, we decided to apply ultrashort pulses in a bidirectional fibre laser. While investigating the gyroscope performance, we observed that the predicted scale factor and resolution of our gyroscope drastically differed from theoretical estimates. We postulated that such a difference could arise due to the nonlinear effects and pulse interactions in the laser cavity. However, the available theoretical models and experimental studies did not provide a comprehensive understanding of the nature of the nonlinear processes in bidirectional fibre laser cavities.

In our labs, we routinely use several real-time laser characterisation techniques that allow recording spatio-temporal and spectral characteristics of ultrashort pulses in real-time, providing insight into their underlying dynamics. Specifically, it is possible to record a relatively long-time span of pulse evolution over thousands of cavity roundtrips both in intensity and spectral domains. These techniques have been used successfully both by the larger community and us for studying a large range of dynamics, ranging from soliton collisions and explosions to turbulent generation and rogue wave formation. We applied these time-tested techniques to record the formation of pulses in bidirectional mode-locked Er-doped fibre laser, in order to understand how they interact in the cavity.

We decided to observe pulse formation under two different initial conditions of laser mode-locking initiating. The first initial condition we investigated was one where the pump power was held constant. In contrast, the polarisation condition of the cavity was changed (i.e. by tuning the intra-cavity polarisation controller)  to initiate mode-locking. Our first study, thus, demonstrated a straightforward formation of pulses and the observed dynamics resembled those reported in previous studies by various groups in unidirectional lasers.

In our present work, we investigated the origination dynamics under the second condition by keeping the polarisation condition of the cavity fixed, while increasing the pump power till lasing was realized. When the pump was switched on, and there was no pre-existing radiation in the cavity beforehand, we essentially tracked the pulses forming from noise. Here we observed a completely different picture - the observed dynamics was rich and diverse, exhibiting dynamics replete with instabilities, energy exchanges between pulses, wavelength drifts, and more. 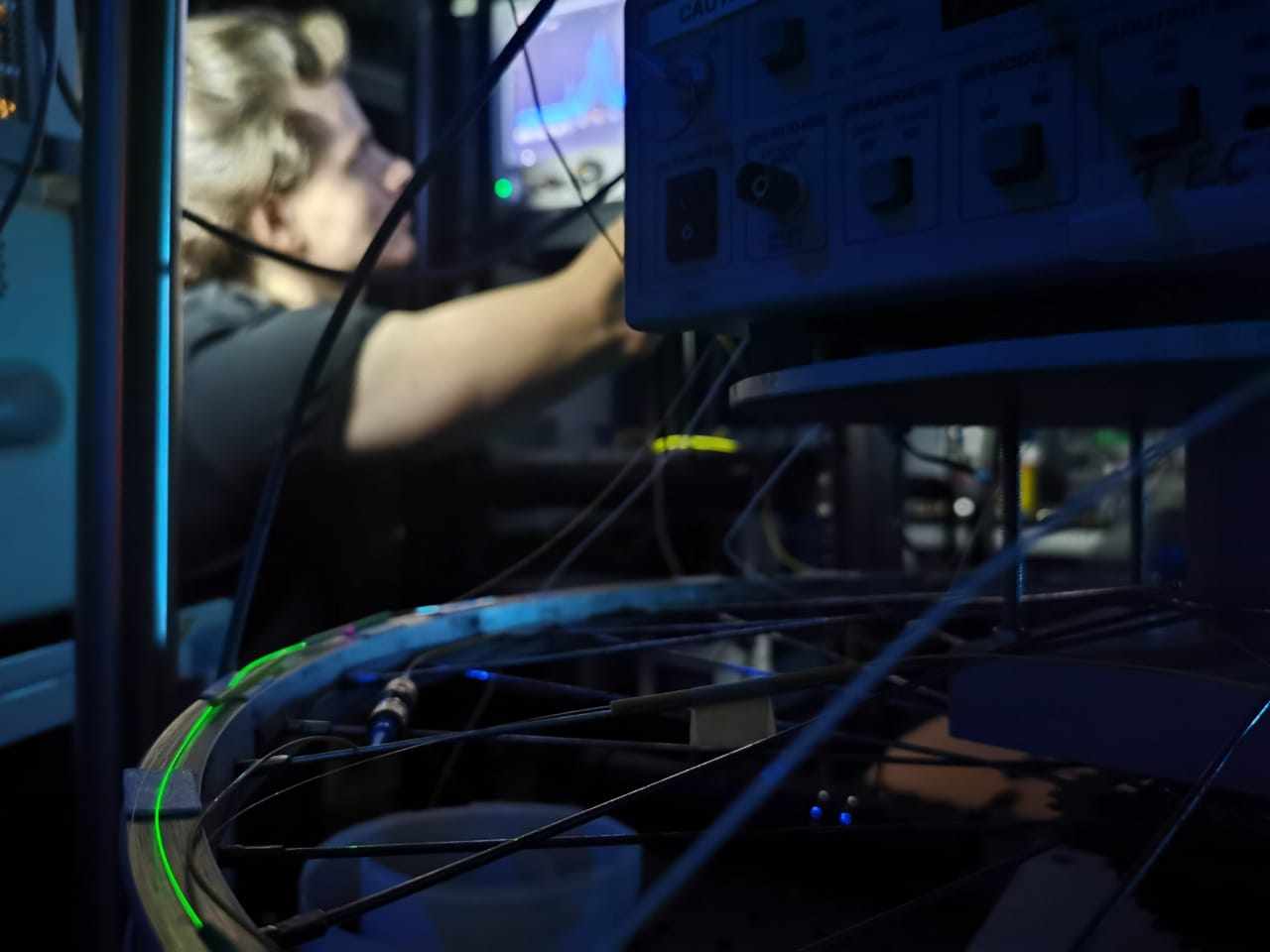 So how was the equipment system realised in the lab?  In the photo above, you can see Igor, (PhD student at Aston University in 2020) recording dynamics of the laser. Targeting studies of fibre laser gyroscopes initially, the laser system still was kept on the rotation platform (based on a simple bicycle wheel). The figure below shows a more schematic representation of the measurement setup. 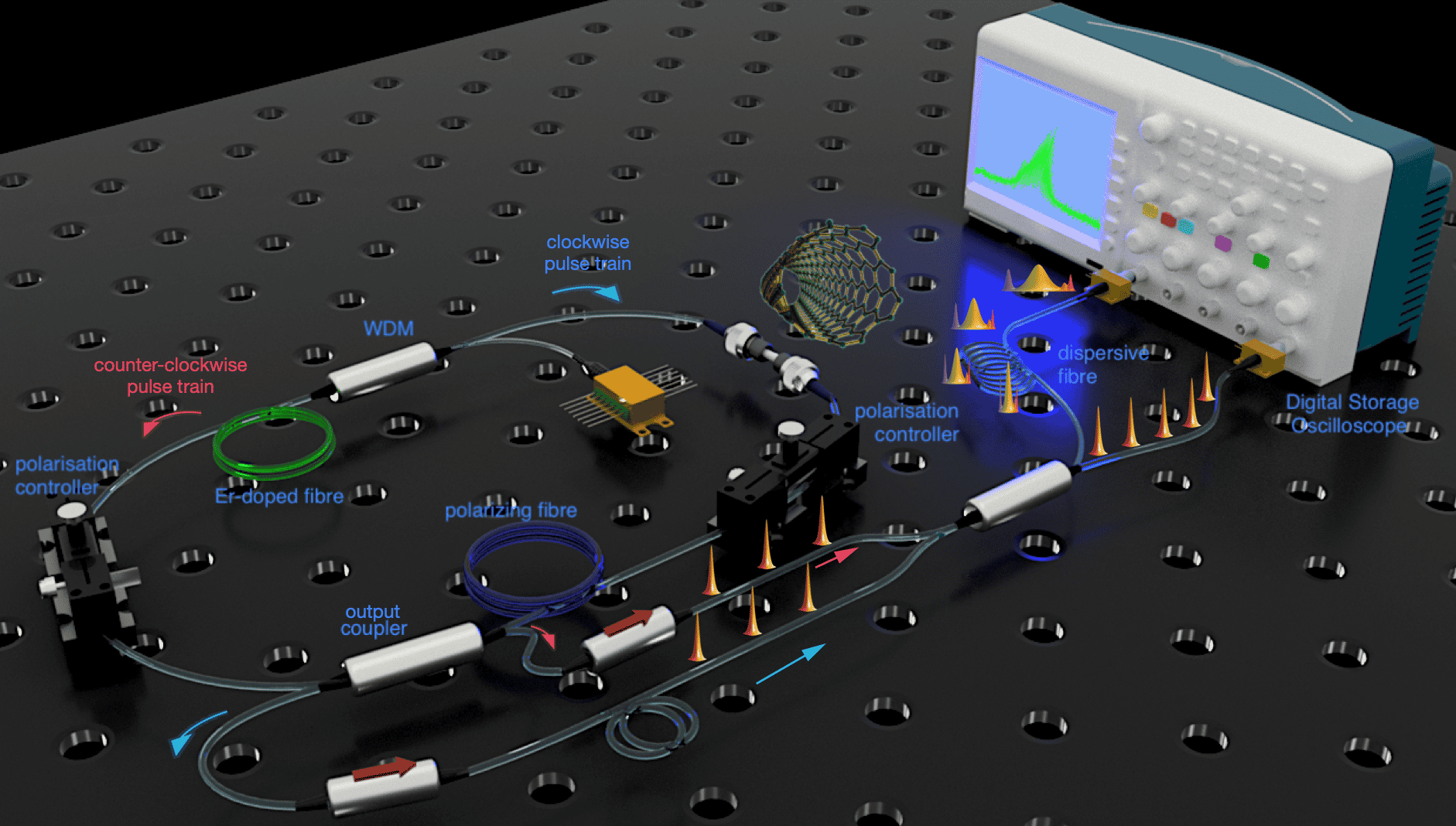 Our system is a ring isolator-free Erbium-doped fibre laser, which was mode-locked using the co-operative effect of a single-walled carbon nanotubes saturable absorber and nonlinear optical Kerr effect. The counter-propagating pulses were combined back together with a delay and transmitted through the highly dispersive fibre, which effected the dispersive Fourier transform (DFT). Analogous to the far-field Fraunhofer diffraction phenomenon, the DFT results in the transformation of the temporal pulses into pulse-resolved spectra, which can be recorded in real-time using the digital storage oscilloscope. Our configuration thus allowed us to track the evolution of both counter-propagating pulses, both in the intensity and spectral domains.

What was the main challenge? Detailed analysis of one or just a few recorded formation dynamics cannot be sufficient for drawing conclusions of the nature of ultrashort pulse evolution in a highly nonlinear medium. Thus, during the experiment, we recorded and analysed almost a hundred successful and unsuccessful build-up processes. The confounding diversity implied we couldn’t use an automatic approach. Hence, we observed these records literally by eye, combing for the subset of the most definitive aspects of pulse formation that were common to all of them. Beyond this, we obtained even more of datasets during the review process to make the case stronger. Since we could not include all data, we chose the most illustrative case for the main text of the paper, supporting it with only 12 of comprehensive evolutions in Supplementary materials.

Our paper marks an important milestone towards an understanding of counter-propagating pulse dynamics, their collision, and interchange of energies. In this aspect, the platform of bidirectional ultrafast lasers, together with the use of real-time measurement techniques offer us a unique opportunity to study these effects directly in the experiment. For instance, in our paper, we have now reported the direct observation of synchronized and unsynchronized dispersive waves in our laser – a nonlinear phenomenon that had been insofar reported only theoretically. This is beyond the diversity of the laser dynamics we observed in general, as mediated by nonlinear interactions in the fibre and gain medium.  The figure below shows one of recorded build-up dynamics (a,b), involving wavelength drift, the formation of soliton complexes (c,d), Q-switch instabilities, mode-locked generation, the formation of synchronised and unsynchronised dispersive waves (e,f). The sheer diversity of the observed phenomenon shows the power of direct experimental observations of such complex systems and demonstrate their potential to feed back into our theoretical understanding of them. 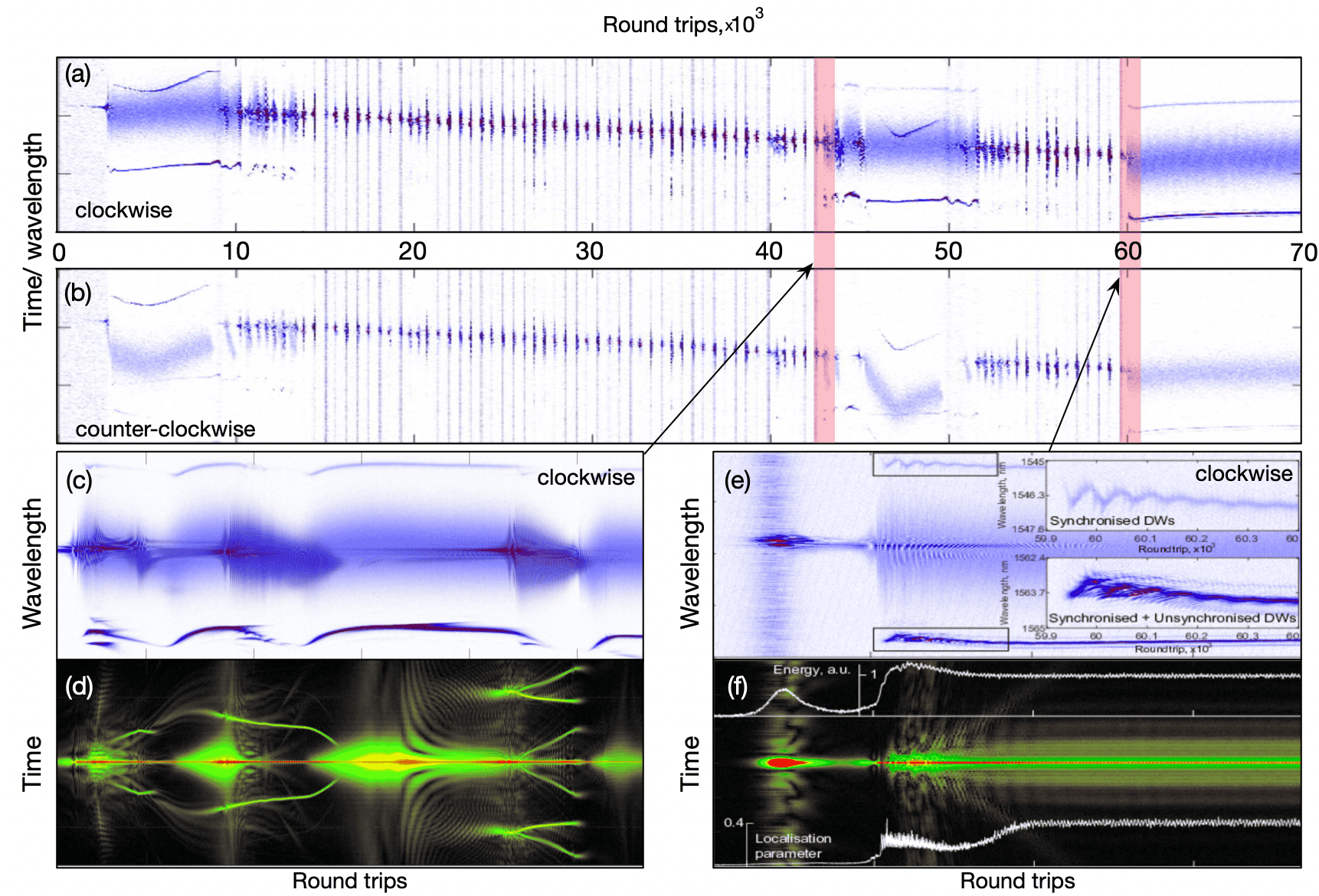 What’s next? Clearly, there is still a lot of work to be done to gather a deeper understanding of the dynamics of bidirectional mode-locked fibre lasers, and the physics of the interaction of counter-propagating pulses in general. We believe that our experimental techniques and observations will lay the groundwork for a more rigorous theoretical description of such systems, specifically when considering the role of nonlinear processes, gain and saturable absorption. In the meanwhile, we are continuing to study rotation and vibration sensitivity of our bidirectional laser system by using different laser generation regimes. We are quite optimistic and eager to share with the community some of our more recent results on advanced laser sensors that are waiting in the wings!

PS As anyone else in the world, we had to face another challenge, albeit not of a scientific nature, of working during the 2020 pandemic. While we luckily had most of the results before the lockdown was declared here in March, a good portion of the writing and answering reviewer questions was done during the lockdown period via teleconferencing sessions and collaborative online editing. Igor could only do repeat experiments to answer reviewer queries after lockdown restrictions were lifted. Also, one of the authors (Srikanth) had a career transition in the midst of the proofing process, which led to the collaboration to become international at an even larger scale! The availability and the importance of collaborative tools cannot be thus understated in the current pandemic times. 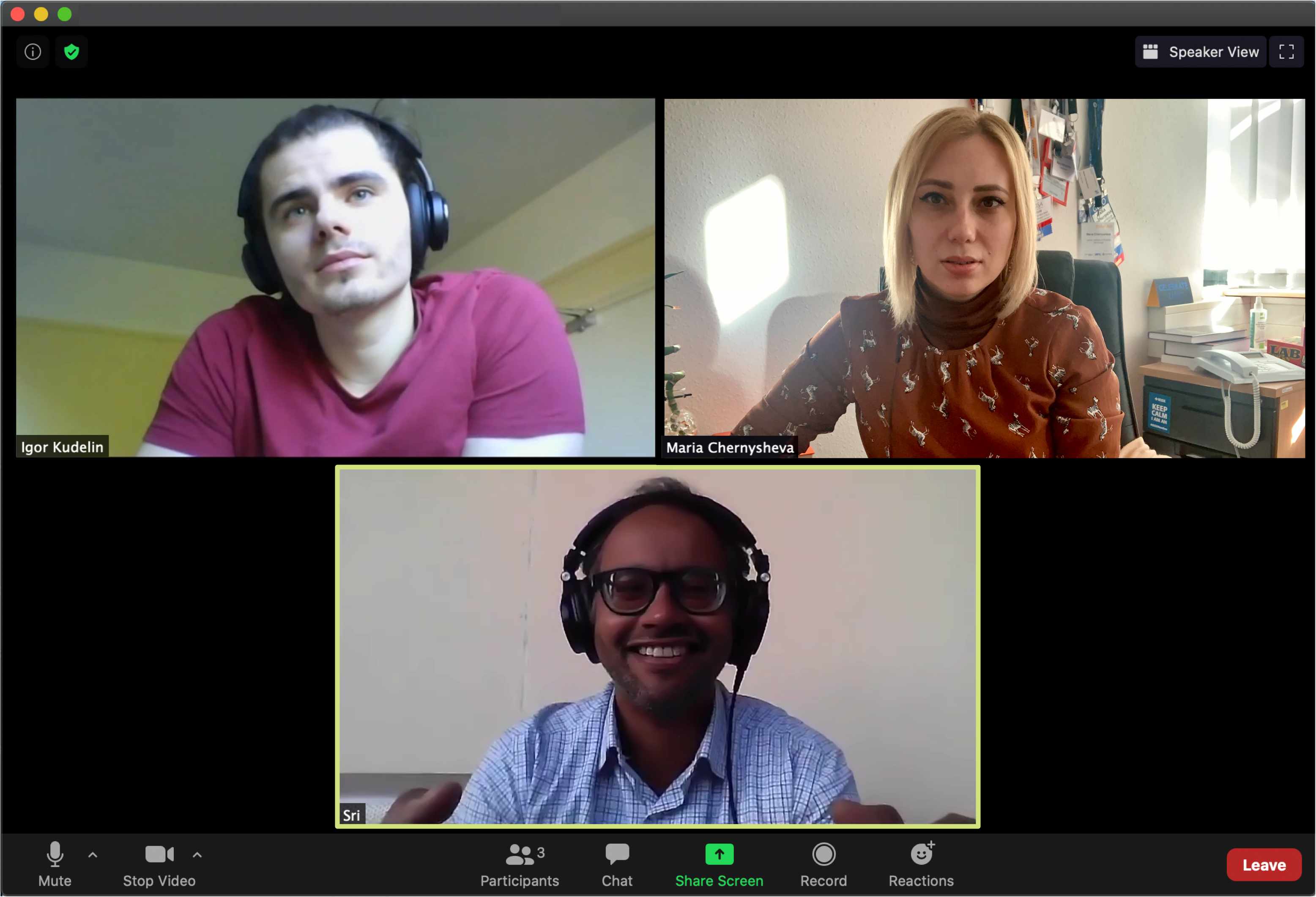 If you are interested in our work, please refer to the paper published in Communication Physics, “Pulse-onset dynamics in a bidirectional mode-locked fibre laser via instabilities" using the link https://www.nature.com/articles/s42005-020-00465-4.

Lunch will be served from NOON

Dr Maria Chernysheva’s research background is in engineering, laser physics and nonlinear optics. She received her PhD in laser physics from Fibre Optics Research Center of the Russian Academy of sciences in 2014. She was exploring and engineering novel ultrafast fibre laser configurations and amplification systems during H2020-Marie Skłodowska-Curie Individual Fellowship and Engineering for Development Research Fellowship from Royal Academy of Engineering at Aston University, UK, from 2014 to 2019. From the beginning of 2019, Dr Chernysheva has moved to Leibniz Institute of Photonic Technologies, Jena, Germany, where she established a Junior Research Group “Ultrafast fibre lasers”. Her current vision is moving towards ultrafast Mid-IR generation in all-fibre lasers for potential applications for medical diagnostics.
Follow