A giant strain was used to induce ferroelectricity in paraelectric ferromagnet

ltiferroic state into materials that are not multiferroic in bulk form. Based on predictions from density functional theories (DFT), a multiferroic state was induced in EuTiO3, [1] SrMnO3 [2] or NaMnF3, [3] i.e. in paraelectric and simultaneously antiferromagnetic materials with a strong spin-phonon coupling, where the lowest-frequency optical phonon is strongly sensitive to temperature, magnetic order and strain. The soft optical phonon can induce a displacive ferroelectric phase transition if the strain in the above-mentioned materials is larger than 1%.

Ten years ago, researchers from the Université de Liège used DFT calculations to predict that a strain-induced ferroelectric phase transition can also be expected in ferromagnetic EuO, but since the phonon is highly stable, the critical strain was predicted to be around 4%.[4] This bold prediction in such a simple material got our attention and marked the beginning of a collaboration among our group in Prague with synthesis and theory groups. Our collaborators from Cornell University began growing strained EuO thin films using molecular-beam epitaxy on various substrates to impose epitaxial strain. Here in Prague we investigated the phonon properties of the strained EuO films using infrared reflectance spectroscopy. We found that although the phonon frequency decreased with tensile strain as predicted, the previously predicted critical 4% tensile strain was insufficient to induce a ferroelectric phonon instability. Hearing this news, our theory colleagues performed new calculations using a more advanced hybrid functional and found that more than 5.8% tensile strain is required for the phonon instability and resulting ferroelectric state. Biaxially straining EuO more than 5% is challenging, as such films tend to relax after the epitaxial growth of only a few monolayers. We overcame this challenge by growing superlattices made of EuO and BaO. The latter material has a larger lattice parameter than EuO and therefore helps to maintain the tensile strain in the thin films. In (EuO)2/(BaO)2 superlattices grown epitaxially on (LaAlO3)0.29-(SrAl1/2Ta1/2O3)0.71 substrates we achieved 6.4% biaxial tensile strain in the EuO layers and observed a ferroelectric soft mode anomaly at 100 K, which induces a peak in the dielectric permittivity typical of a ferroelectric phase transition. Magnetic measurements simultaneously proved that the superlattices remain ferromagnetic, i.e. they are multiferroic. 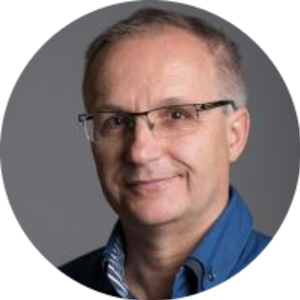 physicist, Institute of Physics of the Czech Academy of Sciences, Prague