Hermiticity of a Hamiltonian ensures the conversation of energy and shapes the physical reality in many systems. When considering non-conservative systems, however, a different story happens. For example, in a system with anisotropic coupling, the electrons jumping to the right have different probability than jumping to the left, leading to the non-conservation of the probability, as well as the energy. For such a system, its Hamiltonian is no longer Hermitian, naturally giving rise to novel physics and phenomena based on non-Hermitian dynamics. Among them, a unique feature emerges, known as the non-Hermitian skin effect. It describes the phenomenon where an extensive number of boundary modes appears under the open boundary conditions in a non-Hermitian system. These boundary modes, also called skin modes, look quite similar to the boundary states in a topologically non-trivial insulator. However, unlike the finite number of topological boundary states given by the bulk-boundary correspondence, the skin modes appear to be extensive (sometimes, all the supported modes in the system are skin modes). Hence, the non-Hermitian skin effect breaks the bulk-boundary correspondence and opens a new physical frontier. While previous studies focused on the simple one-dimensional (1D) systems, whether and how the non-Hermitian effects emerge in higher dimensions remain elusive.

In our paper in Nature communications (https://www.nature.com/articles/s41467-021-25716-y), we demonstrated that a 2D acoustic artificial crystal based on the ring waveguide resonators can realize a higher-order topological insulator, which supports topological 1D edge states and 0D corner states. When introducing non-Hermiticity into this system, wave localization occurs, exhibiting the non-Hermitian skin effect.

We first created our acoustic crystal by using two types of ring waveguide resonators. The larger waveguides act as site whisper-gallery acoustic resonators, while the smaller waveguides play the role of links and couplers between the site resonators. A unit-cell consists of four evenly distributed “site” rings that are coupled to each other through the “link” rings (see Fig. 1a). There are several reasons that we designed our acoustic crystal in such a way. First, the four-site design enables an SSH-like lattice that can give rise to non-trivial bulk polarizations along both x and y directions by tuning the coupling strength (https://doi.org/10.1103/PhysRevB.98.205147).  The non-trivial bulk polarizations suggest non-trivial higher-order topology. Second, the ring resonators support two degenerate clockwise and anti-clockwise whispering-gallery modes. For each mode, the special coupling through ring resonators enables two independent channels for the propagation in both x and y directions. This allows us to create anisotropic coupling by adding biased loss on these propagation channels. For example, for a clockwise mode, its upward propagation passes through the right half of the link rings while its downward propagation passes through the left half of the link rings. If we insert loss material on the left half of the intra-cell ling rings, the downward propagation channel will be killed and the clockwise mode can only propagate upwards (the rightward and leftward propagation can be analyzed using the same way). For the anti-clockwise mode, the process is just opposite. In such a way, the anisotropic coupling for both clockwise and anti-clockwise modes is created. Third, the clockwise and anti-clockwise whispering-gallery modes in our system can emulate the pseudospins, i.e., the spin-down and spin-up states, respectively. This means the non-Hermitian skin effect in our system is spin-dependent. 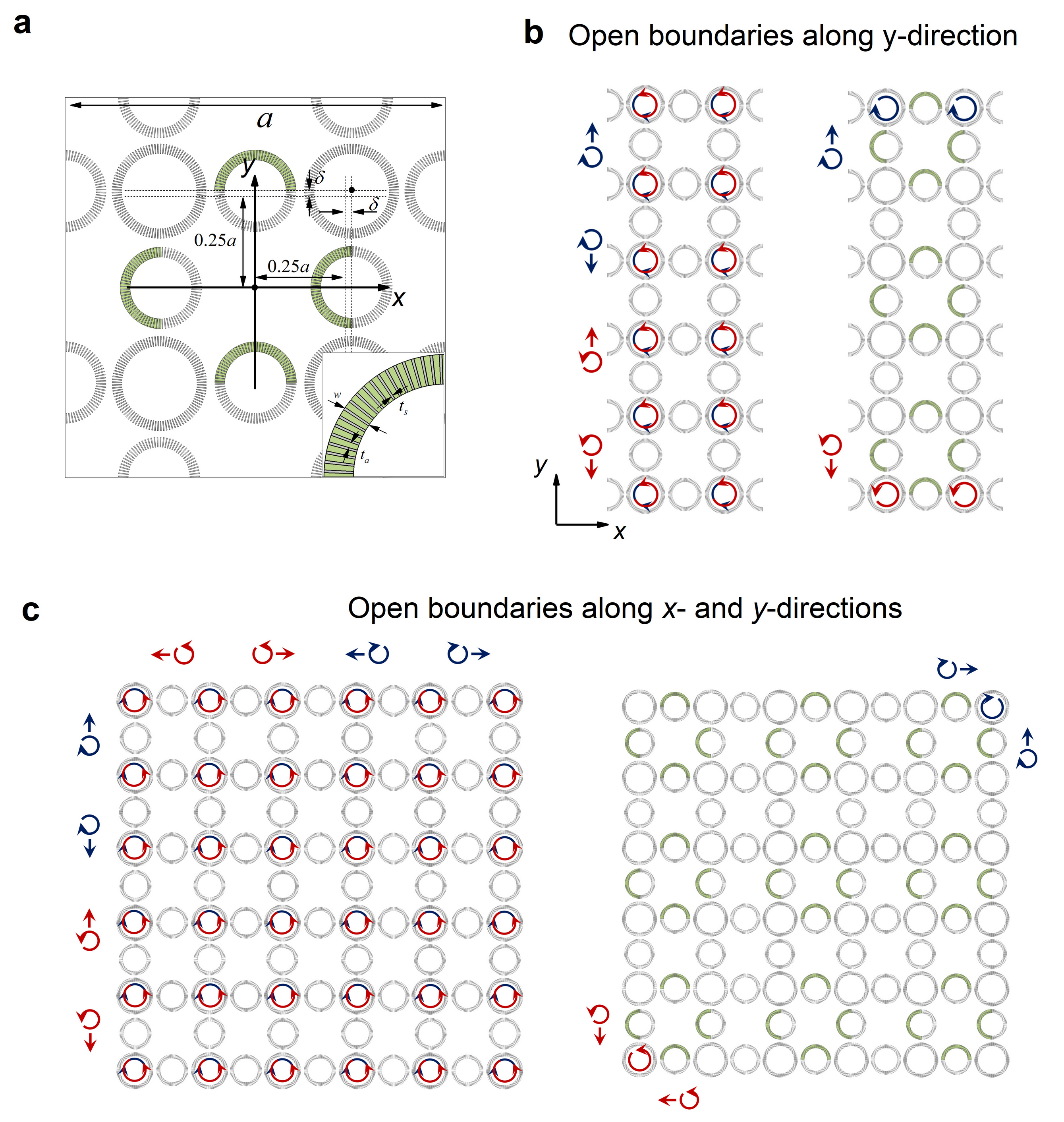 Figure 1. a, A unit cell of the acoustic artificial crystal. b, c, The schematic illustrations of the spin-polarized higher-order non-Hermitian skin effect. Taken from Nature communications (https://www.nature.com/articles/s41467-021-25716-y).

We tried to schematically understand the physics behind the non-Hermitian skin effect. As shown in Fig. 1b, when the system has open boundaries in the y direction and periodic boundaries in the x direction, the spin-up and spin-down states that originally can propagate along both x and y directions in the Hermitian limit are now modified. The spin-up states can only propagate downwards and the spin-down upwards. When encountering with boundaries, wave localization occurs, forming the non-Hermitian skin modes on the lower and upper boundaries. Note that due to the fact that the two spin modes have opposite propagation channels, they are accumulated on opposite boundaries, leading to the spin-dependent skin modes that are separate in space. Following a similar analysis, when the boundaries in both the x and y directions are opened, non-Hermitian skin effect is manifested as wave localization occurs at geometric corners, which is also spin-dependent with spin-up modes accumulated at the lower-left corner and the spin-down modes at the upper-right corner (see Fig. 1c). 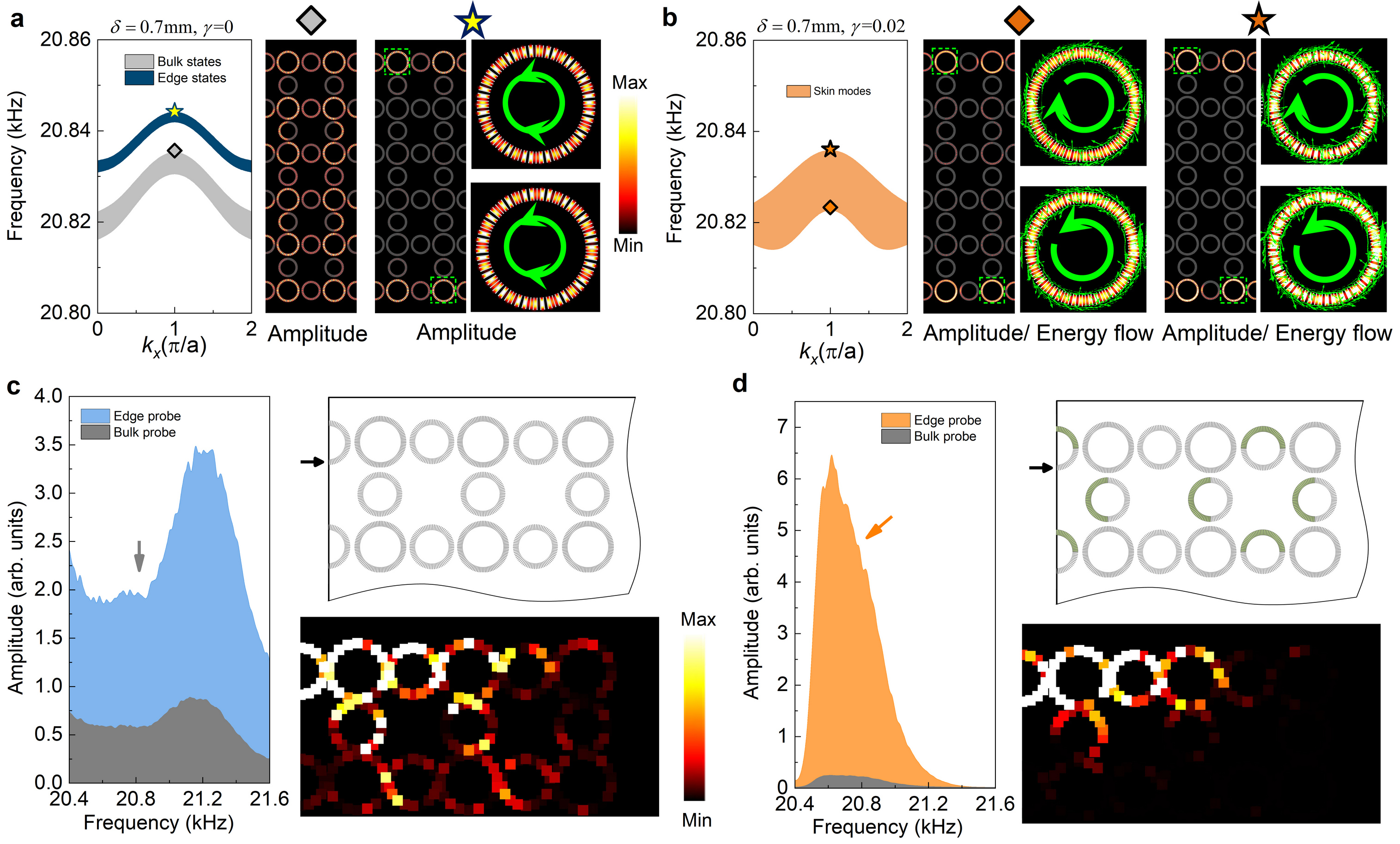 Figure 2.  The calculated eigen-spectrum for a supercell with open boundaries along y direction for a, the Hermitian case and b, the non-Hermitian case. Acoustic pressure field profiles for the marked eigen-states are presented. The corresponding experimental measurements are presented in c, for the Hermitian bulk states and d, for the non-Hermitian skin modes. The left panels denote transmission spectra and the right panels indicate the scanned sound field distributions. Taken from Nature communications (https://www.nature.com/articles/s41467-021-25716-y). 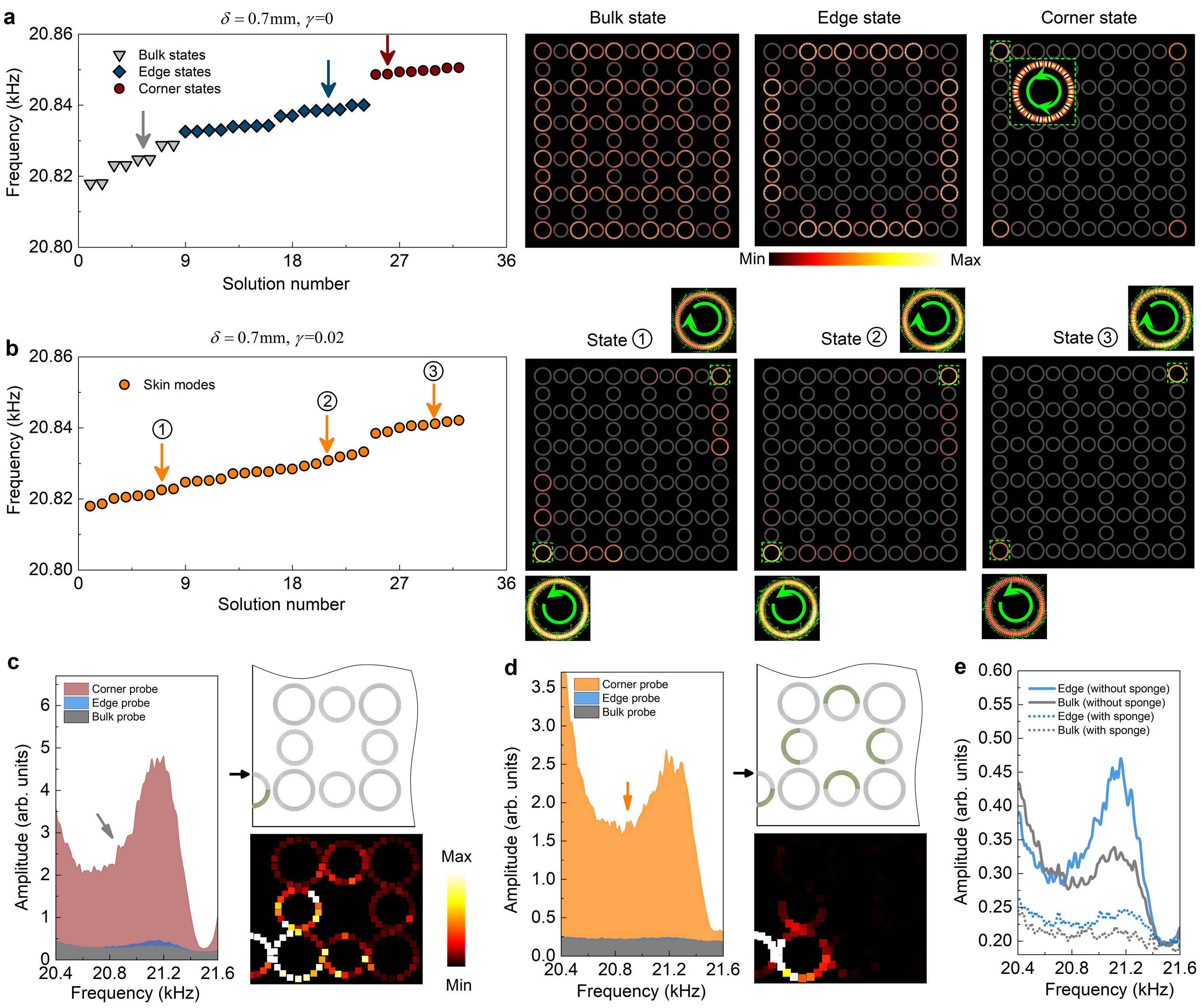 Figure 3.  The same as Figure 2, only for the finite structure with open boundaries along both x and y direction. Taken from Nature communications (https://www.nature.com/articles/s41467-021-25716-y). 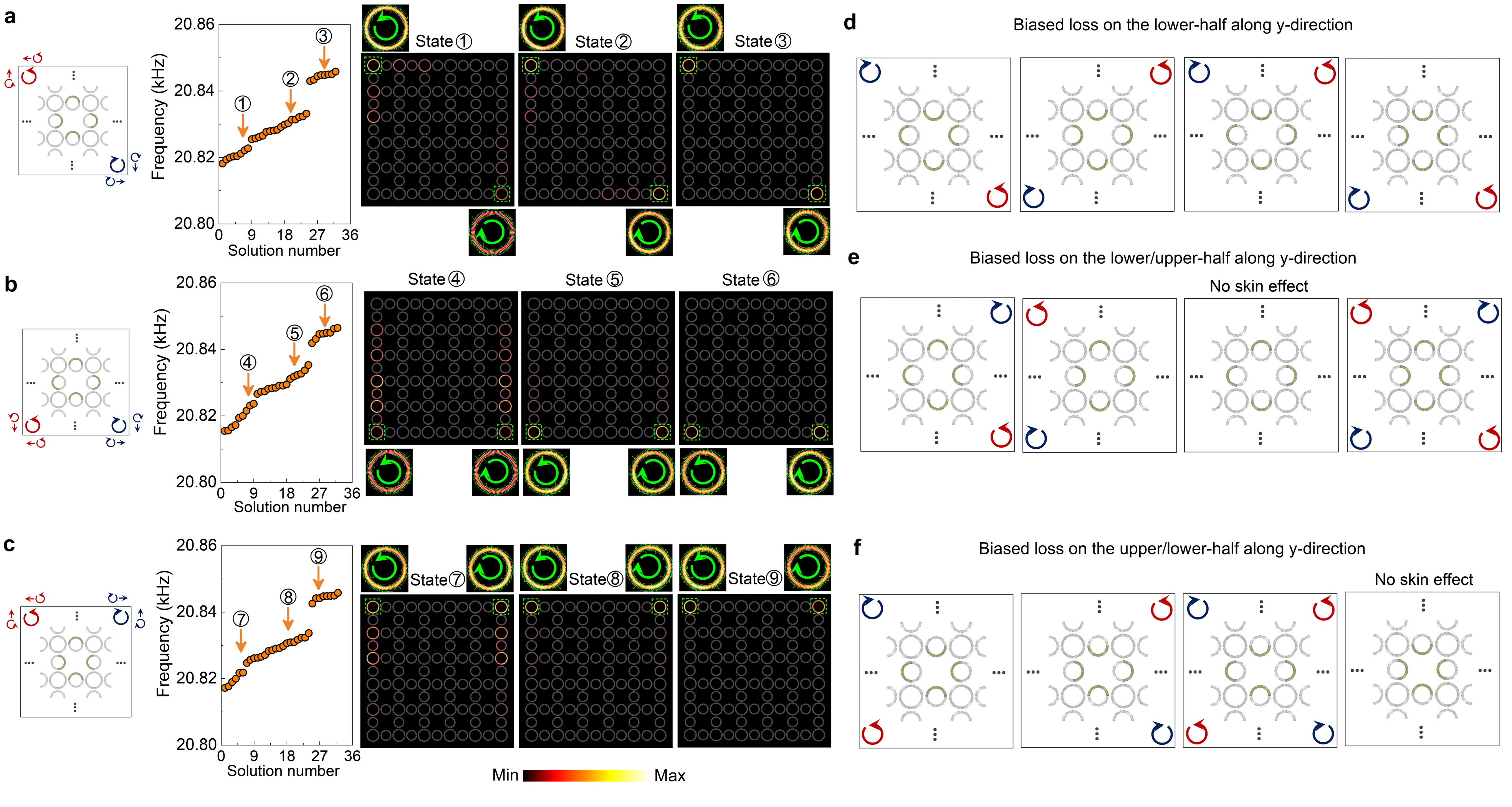