In nature, the temperature of objects can vary from 6000 K at the surface of the Sun to 1 pico-Kelvin in advanced quantum laboratories. Designing a probe which can accurately measure a wide range of temperatures is highly relevant to science and technology. In particular for low temperatures, the precise estimation is more challenging as the relative error can be large. Quantum thermometry provides a means to achieve such precision using quantum systems as thermal probes. In particular, it was shown that the optimal quantum probe at thermal equilibrium has an effective two-level energy structure, with one ground state and a maximally degenerate excited state [1]. However, such probes suffer from two major drawbacks: Firstly, they are only accurate for a narrow range of temperatures, which hinders their effectiveness when the temperature to be measured is unknown in the first place. Moreover, the enormous degeneracy of the excited state is impractical to realize with physical systems.

We were thus motivated to seek an optimal thermometer that can solve both problems. Our scheme is illustrated in Figure 1. We first proposed a theoretical bound for the precision of a probe over an arbitrarily wide range of temperature. This can then be numerically optimized to find the optimal energy structure of the probe.

Figure 1: Schematic of global quantum thermometry. The energy levels of the probe are optimized to provide the lowest average uncertainty in temperature within a certain range.

The first observation is that when the operating temperature range is small, the optimal energy structure is indeed the effective two-level structure as previously found [1]. We refer to this as Phase 1 thermometry. However, something curious happens when the range is widened: At a critical temperature range denoted , the excited energy levels discontinuously bifurcates into two branches, with a two-fold degeneracy in the first excited state, and the remaining energy levels in the second excited state. This marks a new regime of thermometry which we call Phase 2. Increasing the temperature range further, we discover more distinct phases characterized by their respective optimal energy level structures. This critical behaviour also appears when varying the total number of energy levels. 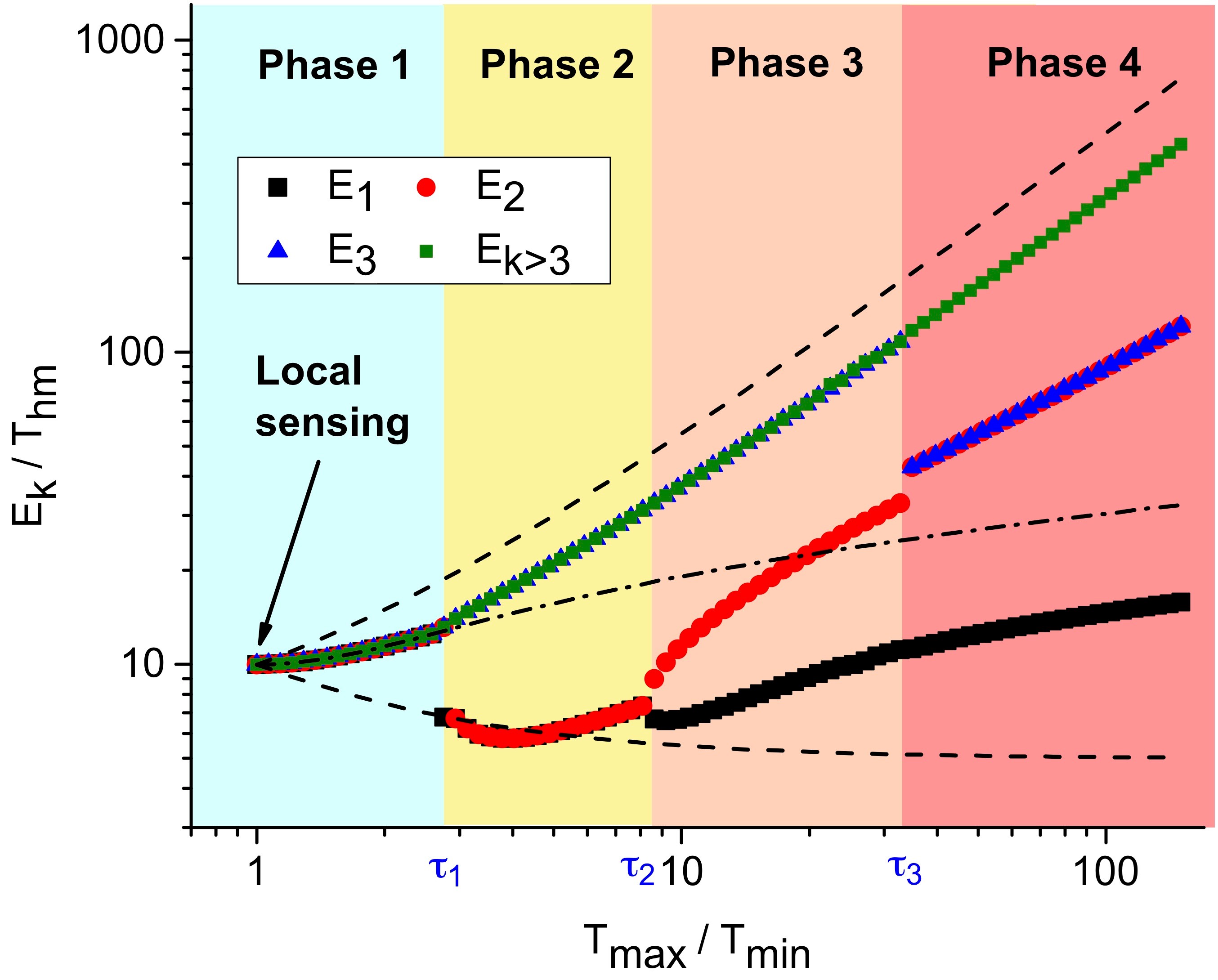 We have thus found the optimal thermometers which work accurately over a wide range of temperatures. The optimal energy levels also deviate significantly from the effective two-level structure. We can offer some intuition for this result: A two-level probe gives the best precision at a temperature proportional to its energy gap. However, as the sensitivity of the probe peaks sharply at this temperature, it performs badly when the actual temperature to be measured is different from the probe’s characteristic temperature. This renders it unsuitable for operating in wide temperature ranges. Our probes provide the optimal balance between sensitivity (due to degeneracy) and coverage of the range (by having multiple energy gaps). In other words, our probes are designed to have a near-uniform sensitivity within the operating range.

The next step is to turn our attention to the practicality of our optimal probes. For this, we consider realistic probes made up of coupled spins which can be engineered easily in the laboratory. Repeating the same optimization procedure, we found that the Ising and the fully dimerized probes achieve comparable performance to the theoretically optimal probes, within a few percent in terms of precision. Interestingly, as we increase the operating temperature range, the parameters in the spin chain probes also exhibit bifurcations, in an attempt to mimic the energy bifurcations of the theoretically optimal probe.

In summary, we have quantified the notion of global thermometry and discovered quantum thermometers that can operate optimally over a wide temperature range. Our work provides a promising solution for sensing of ultra-low temperatures with high precision and paves the way for the practical realization of such probes using spin chains. Our methodology can also be applied to other areas of quantum sensing such as magnetometry [2]. We also expect our findings to open up several key questions for future research: (i) How would the optimal probes change if one incorporates some prior knowledge about the temperature [3]? (ii) Also, will there be a similar bifurcation phenomenon for the optimal non-equilibrium probes?

Our recent paper published in Communications Physics can be found here.