In our recent work, we developed semi-transparent and colourful solar cells capable to generate electricity while offering the comfort for users to self-adjust their light transmission with the intensity of the daylight.

Among photovoltaic technologies, Dye-Sensitized Solar Cells (DSSC) represent a promising approach in terms of efficiency and production costs. They have already demonstrated power conversion efficiencies (PCEs) over 14%, but more interestingly, these devices can be colourful and semi-transparent. This technology is appealing for use in façades of buildings as demonstrated by the first large scale application in 2014 at EPFL Convention Centre.

Like all other photovoltaic technologies, to convert efficiently energy from the Sun into electricity, DSSCs need to absorb radiations in the visible range. This is the reason why the best performing solar cells cannot show a good optical transparency: particularly, a compromise has to be found between transparency and efficiency when applications in façades of buildings are targeted.

State-of-the-art in photovoltaics only allows for the fabrication of semi-transparent devices with a given optical transmission, which is fixed during the fabrication process. In semi-transparent DSSCs, light transmission and photovoltaic efficiency are strongly dependent on the dye employed. For implementation of this technology in façades or even windows in buildings, the development of solar cells with a light transmission capable to self-adjust to the weather conditions could be very valuable.

I started to work on photochromic dyes when I was a PhD student. These molecules, that can reversibly modify their chemical structure under irradiation, and consequently show different absorption spectra in the dark or under light, always fascinated me. Then, I moved to photovoltaics, and few years ago, I imagined photochromic dyes that could help to tackle the challenge of solar cells with light-driven variable transparency. Prior to our work, only few examples of photochromic dyes were reported in DSSCs, unfortunately with disappointing photochromic and photovoltaic performances. Therefore, I proposed a new molecular design to reconcile photochromism and photovoltaics.

With my team, we developed a family of molecules embedding a photochromic naphthopyran core in a push-pull type dye structure. Theoretical modelling and calculations drove the orientation of the naphthopyran unit with the structure and its substitution. After synthesis, we used the dyes as photosensitizers and fabricated DSSCs. Immediately we got solar cells that can vary their colours, and simultaneously adapt their light transmission and PCE with the irradiation conditions.

Early, we identified that these naphthopyran molecules, capable to switch reversibly between a non-coloured isomer and a coloured one in DSSC configuration, possess a peculiar photovoltaic behaviour. In February 2018, I consulted with Prof. J. Anta to use impedance spectroscopy with the goal to elucidate the photochromism and photovoltaics interplay.

In the last two years, we accumulated the set of experimental data presented in the article, optimized the fabrication parameters of the DSSCs to reach 4.2% efficiency and in collaboration with Solaronix, we developed photochromic semi-transparent mini-modules (active surface of 14 cm²) yielding 32.5 mW power output after coloration.

More efforts are necessary to improve the efficiency and the stability of these devices, but I believe that we opened a new playground for the development semi-transparent solar cells with self-adaptive optical properties. The potential for applications in buildings or in automobile could be huge. 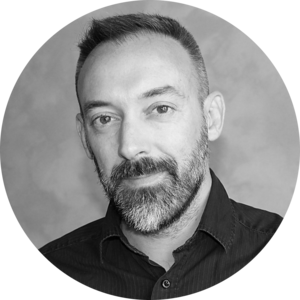