In this work, we demonstrate the structural analysis of a bulk-like Laves phase by imaging an off-stoichiometric binary mixture of hard-sphere-like nanoparticles in spherical confinement by electron tomography, enabling defect analysis on the single-particle level.

Assembling binary mixtures of colloidal particles into crystals, gives rise to collective properties depending on the crystal structure and the individual properties of both species, thus opening up an avenue to create novel functional materials. Significant progress on making binary (and even multi-) component colloidal crystals has been achieved within the last decade. As the properties of the materials (e.g., conductivity) highly depend on the presence of defects, it is therefore crucial to investigate the assemblies on a single-particle level in a quantitative manner.

Laves phases, binary crystal structures with an LS2 stoichiometry where the small (S) species and the large (L) species have a size ratio γ = σS/σL with σL(S) the diameter of the L(S) species ~0.82, was first found in intermetallic compounds: MgZn2, MgCu2 and MgNi2. The Laves phases have also been found in binary hard spheres (HS) at size ratios in the range of 0.76 ≤ γ ≤ 0.84, where the MgZn2 is the most thermodynamically stable structure although the free-energy difference between the three Laves structures is minute. Previous study showed that stacking faults tend to form in a face-centered cubic crystal of HS-like particles. One therefore expects to find stacking faults in HS-like Laves phase crystals as well. In a successful collaboration with Prof. Christopher Murray's team, we prepared HS-like binary species, small CdSe and large PbSe NCs, with a size ratio of 0.78 as a model system. Although the 2D transmission electron microscopy (TEM) projection of the self-assembled binary nanocrystal superlattices (BNSLs) in bulk showed a good agreement with the structure of a MgZn2 lattice (Fig. 1), one cannot rule out possible stacking faults or even the other two Laves structures due to free-energy degeneracy of the three Laves phases.

Fig. 1 Self-assembled BNSLs in bulk. BNSL composed of CdSe and PbSe NCs showing a MgZn2-like structure viewed along the [0001] projection at different magnifications. The hexagonal symmetry can be visualized from a false colored Fourier transform (inset of a) with a MgZn2 structure model (overlay in b) viewed along the [0001] projection. Scale bars, 100 nm (a) and 50 nm (b) .

Electron tomography (3D TEM) analysis is the best tool to unambiguously identify the crystal structure on a single particle level quantitatively. It is however highly challenging to implement quantitative electron tomography analysis of thick BNSLs. This is because when the slab-shaped BNSLs are at high tilt angles, they become no longer electron transparent. To tackle this challenge, we proposed to assemble binary species into a structure with a spherical shape, which has the advantage that the path length for the electron beam becomes independent of the tilt angle. Prof. Alfons van Blaaderen's group developed a robust way to self-assemble colloidal particles in slowly drying emulsion droplets to obtain the so-called supraparticles (SPs): particles made from particles1-3. We however note that the spherical confinement can also induce a structure change to icosahedral order (spherical confinement effect), which is different from the bulk-like structures of the building blocks. Therefore, it became urgent to explore a feasible route to self-assemble binary species into Laves crystals in spherical confinement while suppressing the spherical confinement effect.

It is known that the structure of the BNSLs is sensitive to the number ratio of the binary species. In our recent work3, we showed that a binary mixture of HS-like colloids with a size ratio of 0.78, which crystallizes into a structure analogous to the hexagonal MgZn2 Laves phase in bulk, into a binary icosahedral cluster if the number ratio of the binary species matches the stoichiometry of a perfect Laves phase. In contrast, in the current work, we applied an excess amount of small species in the binary mixture during the self-assembly in spherical confinement. Each SP showed a core-shell structure. It is worthwhile to mention that the core-shell SPs did not show any icosahedral symmetry. At a first glance, the structure of the core seemingly matched that of a MgZn2 Laves crystal (Fig. 2a-b). By teaming up with Prof. Sara Bals' group, we performed electron tomography on SPs containing over 50 layers of nanoparticles and extracted coordinates of both species using advanced reconstruction algorithm, which allowed subsequent quantitative structural analysis (Fig. 2c-d). With bond-orientational order parameters (BOPs) analysis of both the L and S species carried out by my colleague Dr. Ernest van der Wee and Prof. Marjolein Dijkstra's team, we highlighted that the structure of our SPs should be characterized as a mixture of hexagonal Laves phases (Fig. 3), similar to the random stacking of hexagonally-close-packed layers in single-species HSs. Moreover, we found that the number ratio of the binary species in the crystalline core matched the stoichiometry of a perfect Laves phase. We speculate that the off-stoichiometry of the binary species negates the confinement effect, thus leading to bulk-like binary crystals. We believe that the stacking faults in the MgZn2 crystal structure formed in the SPs as a result of mis-stacking during crystal growth, which have not been able to anneal out within the time-scale of the emulsion droplet drying, a process which was found to be slow for single-species crystals of HS particles. 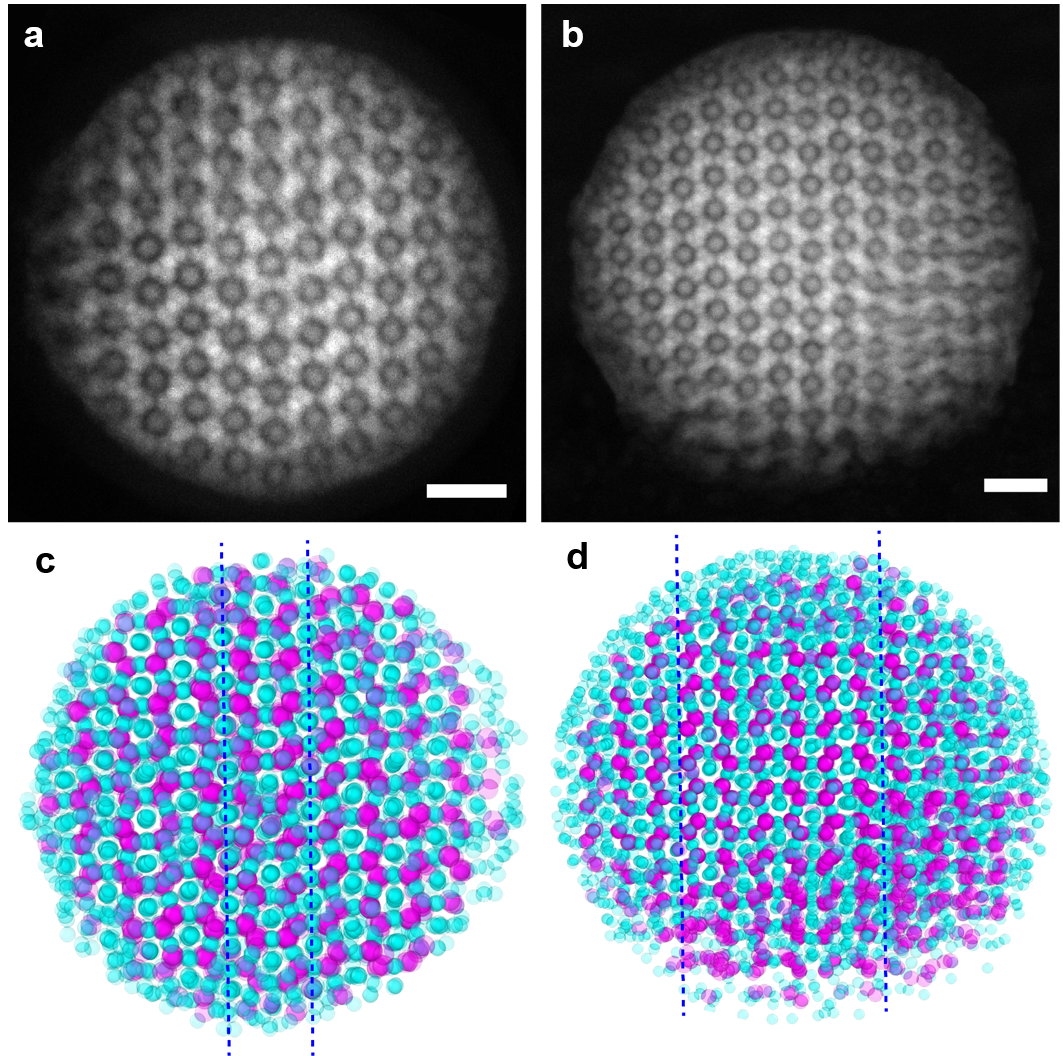 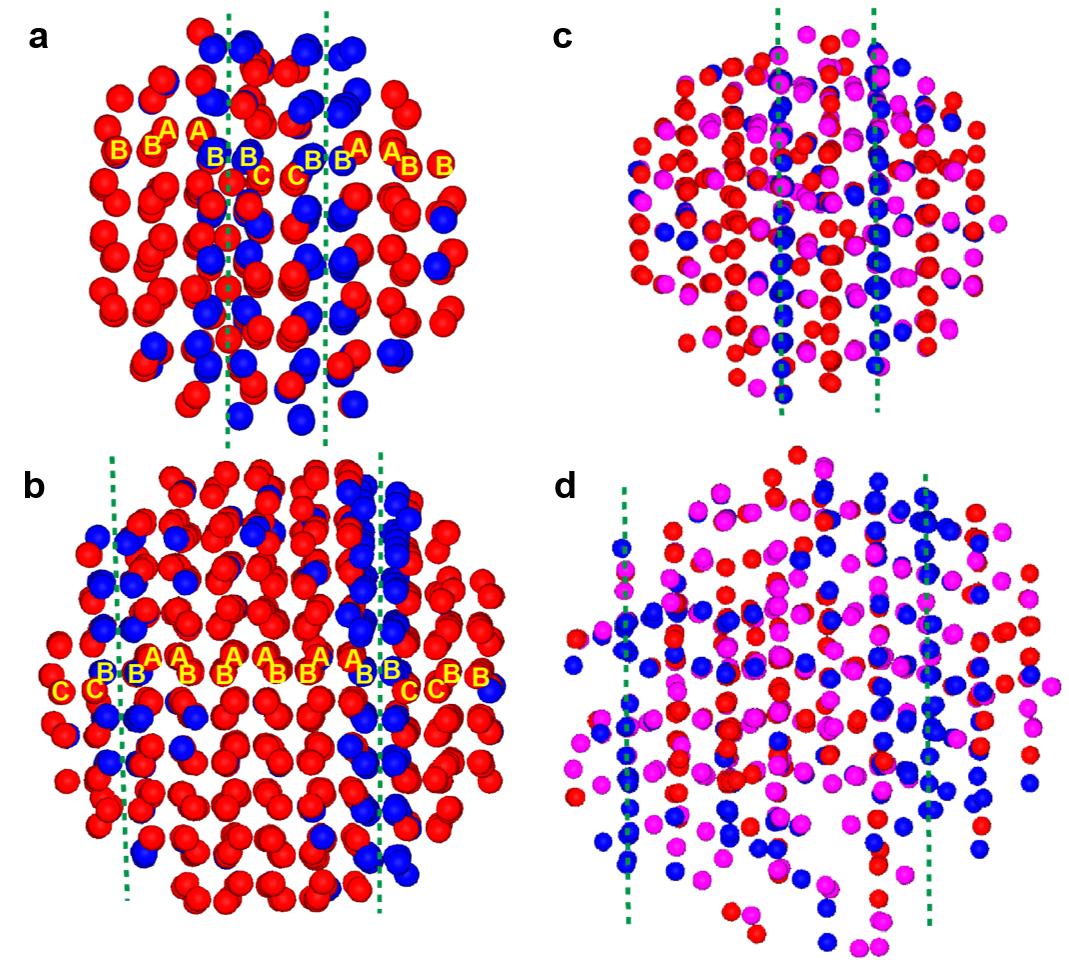 Fig. 3 BOP analysis of L and S species. Computer renderings of the (a,b) L and (c,d) S species colored according to their BOP values in the (a,c) 115 nm- and (b,d) 150 nm-sized SPs, revealing the stacking faults
(marked with green dashed lines) in the crystal (see Fig. 4 and 5 in the published article for more details).

Looking forward, we foresee that using off-stoichiometric self-assembly of binary crystals in the perfect spherical geometry of SPs will enable quantitative 3D real-space analysis on the single-particle level of a broad range of bulk-like binary crystals, thus shedding light on structure-property relationships. 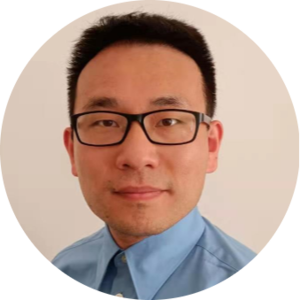