Menu
A community from Nature Research
Contributor Nature
Behind the Paper

The nature of polymer glass surfaces has been elusive for 30 years. We show that these surfaces are rubbery - a result of accelerated surface dynamics modulated by long-range covalent connectivity. This casts new light on problems including tribology, adhesion, and healing of macromolecular glasses.

The surfaces of glasses are strange. Famously, glasses are not like other apparently solid materials. Given a snapshot of their structure, one would have a very difficult time distinguishing them from a liquid. Why, then, do they act like solids? Ask someone in this field, and you may get anything from a shrug to a definitive-seeming answer (in the latter case, the answer may differ profoundly depending on who you ask). Their surfaces are, if possible, even stranger1,2. Here, dynamical rates are massively altered – as much as a 108 times speedup at the glass transition temperature (and likely much more at lower temperatures)2,3, or roughly the difference between the blink of an eye and a year. If you are like me (circa ten years ago), you probably are thinking “this is just a consequence of missing molecular neighbors at the surface, as with the liquid-like surface of frozen water that lets us ice skate”. Perhaps, but perhaps not. Remarkably, in glasses these gradients can extend vastly further than alterations in structure and dynamics at their surface – as far as 10 nm or more4,5. Any purely local structural theory of the phenomenon faces some serious hurdles1.

This problem, which is critical to understanding the properties of the broad array of materials that are rich in interfaces, is particularly complex in glassy polymers. Here, the molecule itself is of the same order of size as the massive interfacial gradient in dynamics. If nonpolymeric glasses have thick, liquid-like surfaces, what happens when a long chain of covalent bonds connects the surface to the bulk? What is the nature of the surface of polymer glasses? Are they glassy? Liquid-like? Something else?

This is the problem that Rodney Priestley and I have been working on jointly for several years, and it is the problem we address in our paper just released in Nature, together with collaborators Biao Zuo, Xinping Wang, Keiji Tanaka, and students in our groups.

The story of this paper begins with a meeting in April 2020, just after everything went remote at the beginning of the pandemic. Rod had pulled Biao, then a visiting professor in his lab, into one of our regular Zoom meetings, and they had some striking new data to share. Their research groups had developed a method to measure deformation in a nanoscale layer at the surface of polymer film by driving growth of a wetting ridge via deposition of an ionic droplet. 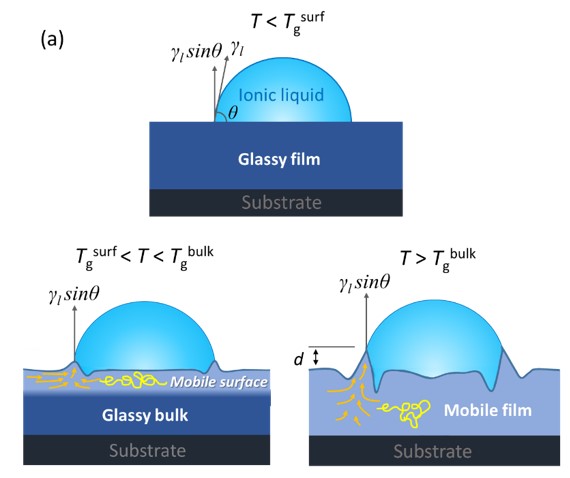 For a modeler like me, this was a dream come true – one of the massive challenges the field has faced in interpreting experiments in this area has been an inability to experimentally observe the local, time-resolved behavior right at a polymer interface. Biao and Rod finally had these critical data, and they looked strange.

To understand why the data were surprising, you have to know something about the usual deformation behavior of polymers. Large polymers topologically entangle in their pure state: like spaghetti, their uncrossability causes them to tangle up and exhibit a collective rubbery solid response. Given time, these entanglements can work themselves out. Consequently, when you pull on an entangled polymer, it initially exhibits a rubbery elastic response before finally flowing (like gently pulling on a bundle of cooked spaghetti – at first it will attempt to spring back, but given time and a soft pull it will eventually pull apart). Rod and Biao’s data indicated that, in a nanometers-thick layer right at the surface of the film, the duration of the entangled rubbery response was growing on cooling. From a physics standpoint, the system was acting as though the polymers were getting longer on cooling and thus tangling up more persistently. This is not something polymers do – it is as though you cooled down spaghetti and it doubled in length.

How can spaghetti get longer when it gets colder? It can’t, of course. Neither could these polymers. Something else was happening here. Imagine a polymer molecule (basically a strand of molecular spaghetti) sitting right at the surface of the material.  Right here at the surface, dynamics are fast (the pasta is slippery), and it is easy for the molecule to slide around. However, perhaps one end of this molecule dangles down further into the material, where things move slowly (as though the pasta were less slippery and more sticky further from the surface of your pot). You can see a picture below of such a chain in a simulation – here redder material is faster (slipperier in the pasta metaphor), and bluer material is slower. 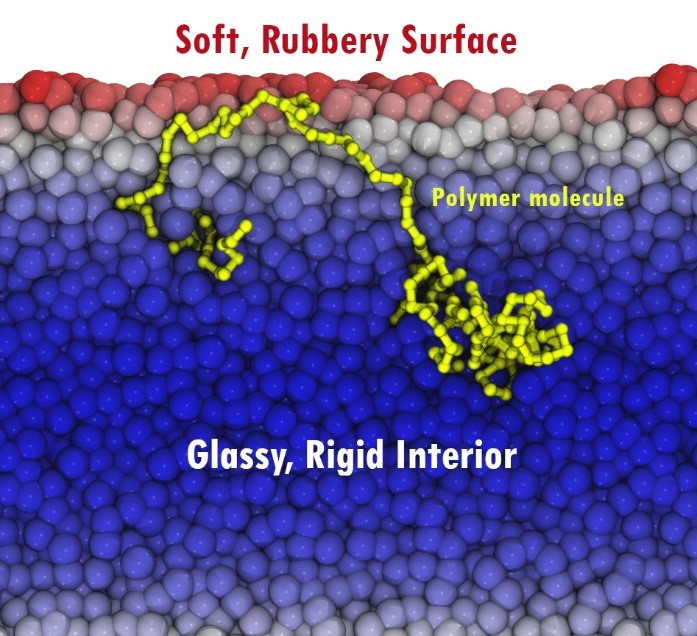 When the part of this molecule that is right at the surface tries to move, it can do so quickly over a fair distance, but then it is held in place by its end that dangles down into the slower bulk of the material. It has to wait for that end to gradually move in its much slower (less slippery) environment. It turns out that this ‘waiting’ for slower motion deeper in the material almost perfectly mimics the effect of topological entanglement (of the pasta tangling up), with one exception. Because the difference between surface and interior dynamics (slipperiness) grows stronger on cooling, the surface has to wait longer on the interior as the system cools, and this mimics the appearance of a lengthening, increasingly tangled up molecule (or spaghetti). Effectively, the long chains of chemical bonds in the polymer molecules were spanning the massive surface gradient in local dynamics and temporarily ‘tethering’ the motion of the top layer.

This was the hypothesis we arrived at by the beginning of that initial meeting. Of course, this was actually just the beginning of research on our end. A few months and one excellent graduate student later (Asieh Ghanekarade – keep an eye out for her on the postdoc market in the near future), we had the molecular simulation data to confirm the ‘spaghetti gradient’ picture we had hypothesized. Even better, a few months after that the experimentalists had reproduced our key finding from simulation – this effect occurred even in the absence of molecular ‘entanglement’ and thus had to be another set of physics entirely.

We submitted the paper, thinking that we really had this ‘spaghetti surface gradient’ story nailed down. Instead, a few months later, I found myself mulling over a reviewer comment in the middle of a seven-hour drive (as one does). They suggested that we should really add a more quantitative description of our ‘spaghetti gradient’ picture. I couldn’t really argue with this, but I’d been at a loss as to how to proceed. I have to say, the middle of a 7-hour drive (while at the wheel) is not the ideal time at which to suddenly think of an analytic theory for the phenomenon you have been working on – the rest of the drive becomes a multi-hour exercise in mathematical memory and in rudely ignoring everyone else in the car. Nevertheless, a few days later, with the help of Asieh, we had a full theory with predictions that lined up strikingly well with the simulations. At the next meeting with Biao and Rod, they had the data to show that experiments likewise lined up beautifully with the theory.

So is the surface of a polymer glass a solid or a liquid? The answer is a bit of both. It acts, at first, like a a rubbery solid – a consequence of tethering to the glassy underlayer. We expect that at low enough temperatures this rubbery surface will be all one observes on any reasonable timescale. At the higher temperatures we have probed, this effect finally gives way to liquid like behavior.

Beyond the science, I suggest a few practical morals of this story for aspiring computational graduate students (aside from the obvious “find experimental collaborators who invent groundbreaking new measurements on the side”): (1) Despite the seemingly universal reputation of “Reviewer 2” as a troublemaker on everyone’s paper, they are sometimes extremely helpful (thank you, whoever you are!); (2) If you have never used public transportation before, consider doing so in the weeks after getting your reviews back. Bring some paper. 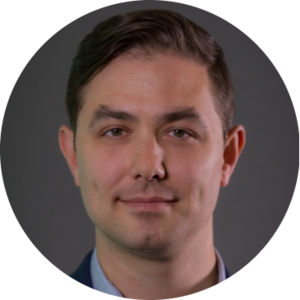