A revolutionized way to create and, more importantly, secure the contact of silicon, enabling stable high-capacity and high-rate anodes for advanced lithium storage and beyond.

+1
Xianglong Li and 1 other See all
Professor, National Center for Nanoscience and Technology (NCNST)

Silicon is a very promising anode material for lithium-ion and post lithium-ion batteries because of its high theoretical charge capacity, low working potential, and abundance in nature. Yet, it suffers from a large volume change upon cycling. This volume change results in rapid capacity decay and unacceptable cycle life, severely impeding performance and practical use. The key reason is that such a large volume change causes pulverization and electrical disconnection of the active material, but also forms dynamic interfaces occurring undesirable side reactions.

To address this challenging issue, a variety of material construction protocols has been extensively developed by different research groups and battery industries. Based on hybridization and combination of silicon with various carbon materials, we have also demonstrated various materials design formulas and construction strategies for boosting the performance of silicon anodes1. Upon a careful extermination, in most of the existing methodologies the contact between silicon and the adjacent conductive medium belongs to a single- and/or few-point mode of physical or covalent binding. This frequently adopted binding rather retards and even obstructs charge transport from and to the silicon, being highly unfavorable for lithium storage kinetics and also long-term stability. This fact is consistent with the situation that stability improvements have been demonstrated yet inevitably at the expense of capacity, rate capability, and/or other parameters. In this context, we believe conceptually new design principles and also binding modes are indispensable to really unlock the dilemma. 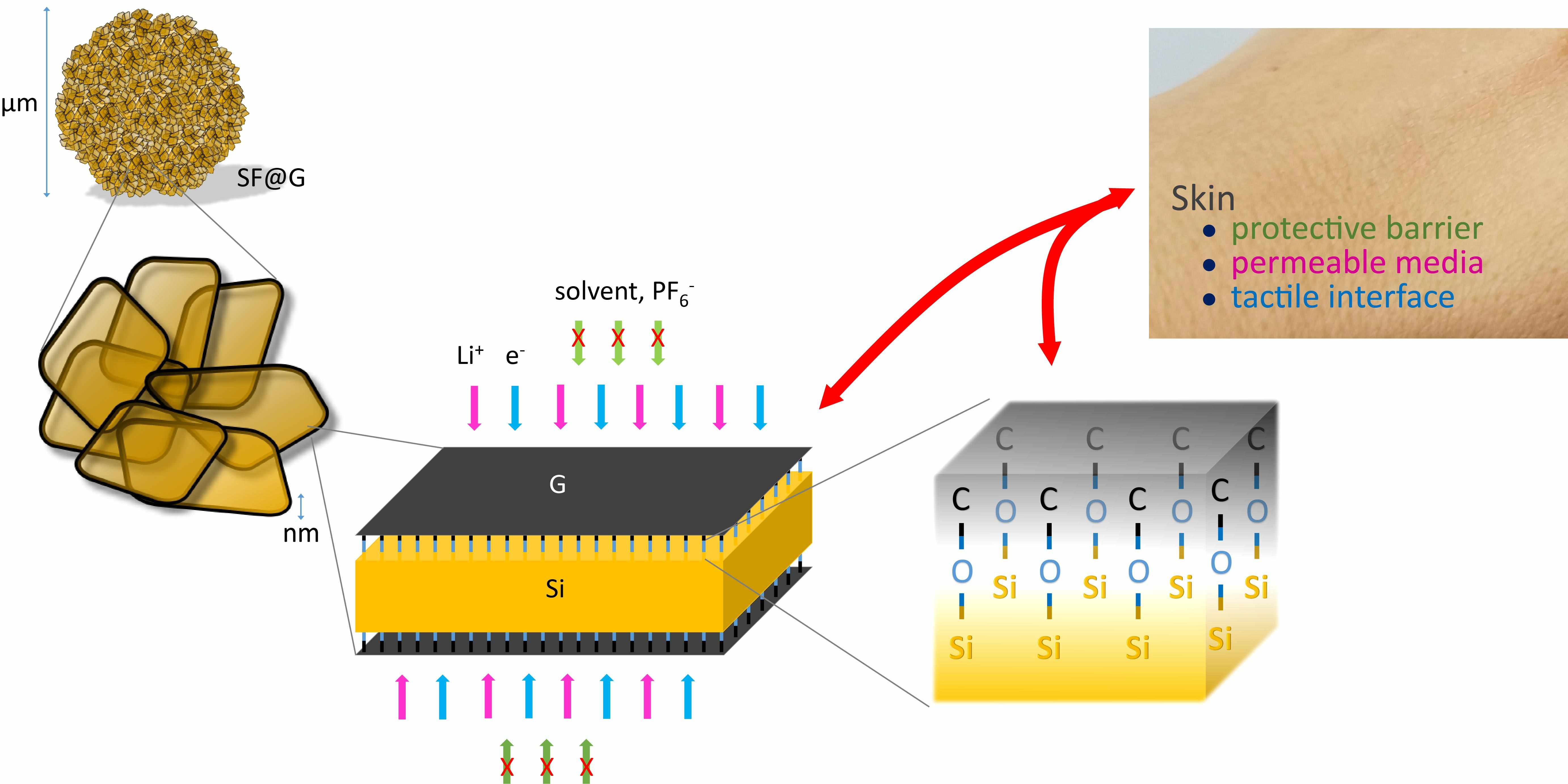 Figure 1: Skin function-mimicking silicon-carbon hybrids enabled by a two-dimensional covalent encapsulation. The covalently-bound carbon acts as a multifunctional dimension, creating fast transport pathways for both electrons and lithium ions, and at the same time, profoundly blocking the solvents and anions.

Inspired by skin functions (e.g., protective barrier, permeable media, and tactile interface) and skin-grafting widely used in the field of reconstructive and aesthetic surgery, in this work we provided a quite interesting and energetic material design strategy, namely, two-dimensional covalent encapsulation (Figure 1). It furnishes a brand new binding mode between silicon and the adjacent electrically conductive media towards exploiting silicon-based lithium battery anodes with high integrated performance. The two-dimensional, covalently bound silicon-carbon hybrids, as a proof-of-concept of such design, has been fabricated from cost-effective raw materials via a simple, facile, and scalable manufacturing process, exhibiting exceptionally high capacity, rate capability, and cyclic stability when refereed to weight, volume and area. Further, the achieved full cell characteristics (e.g., substantially improved specific energy and energy density in terms of the whole cells with various cathodes) point to the viability and potential of our design. Subsequently, we investigated the mechanism behind such a remarkable level of integrated lithium storage performances by different electrochemical and spectroscopic characterizations. Different from existing strategies, the two-dimensional covalent binding confers a robust and efficient contact between the silicon and electrically conductive media, creating stable and fast transport pathways for both electrons and ions from and to silicon. More impressively, this design fundamentally revolutionizes the interface between silicon and the electrolyte, thus guaranteeing the as-created contact and transport paths to persist upon cycling.

This study opens a new and viable avenue to stabilize silicon without sacrificing other device parameters including capacity and rate capability. We believe the deployment of such silicon anodes would promote realization of advanced lithium-ion and post-lithium-ion batteries especially targeting long-range electric vehicles, large-scale renewable energy integration systems, as well as others requiring high energy and high power. In addition, our work holds great promise for both further rational design and mass production of other advanced materials to be used in energy storage and beyond.