+3
Jun Yuan and 3 others See all
Professor, University of York
Follow 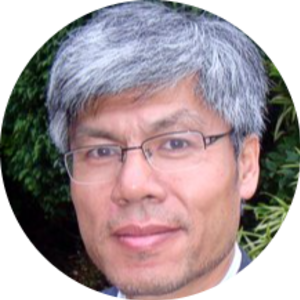 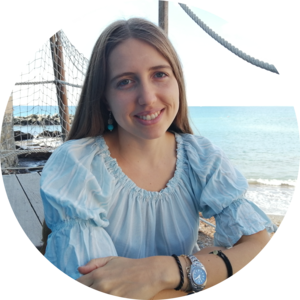 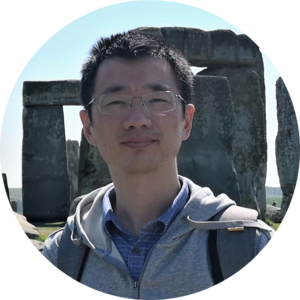 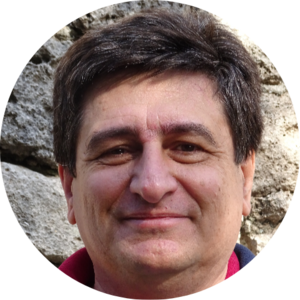 Since classical antiquity, the shapes of regular polyhedra have fascinated philosophers and scientists. A well known example comes from the platonic dialogue Timaeus, in which the pythagorean philosopher Timaeus exposes a theory about the structure of matter,  hypothesizing that the four basic elements, previously identified by Empedocles, are made of  regular polyhedra -- Earth is made of tiny cubes, Water of icosahedra, Air of octahedra and Fire, the lightest, most elusive, mysterious element, of sharply pointed, stinging tetrahedra.

In recent times, regularly shaped nanoparticles are being widely studied because they are interesting nanosystems with specific surfaces. They are obviously interesting for catalysts whose surfaces are where chemical reactions take place  and control of which are of vital importance.  Over the years, people have found many ways to control the shape of nanoparticles, being quite successful at synthesizing many different structures. These structures comprise cubes, icosahedra and octahedra, all made by packing atoms together. Tetrahedra were seldom produced, remaining the most elusive shape among these four polyhedra. Therefore, while ancient philosophers believed that the elementary constituents of matter have the shape of regular polyhedra, modern scientists build up nanosized regular polyhedra starting from the basic constituents of matter, that is from the atoms. 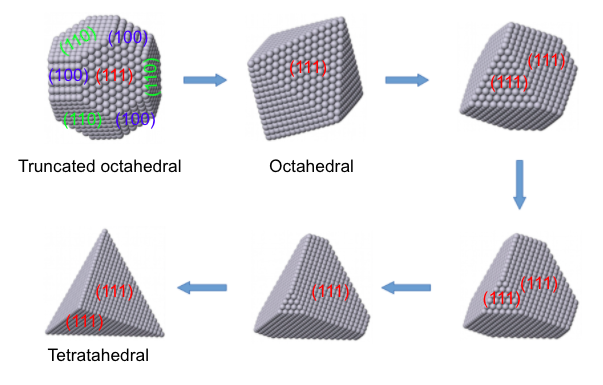 This transformation needs a sort of spontaneous symmetry breaking from the octahedral symmetry group to its tetrahedral subgroup.  The irony is that scientists now have developed the recipes to produce these nanoparticles in large numbers without knowing the underlying mechanism involved. 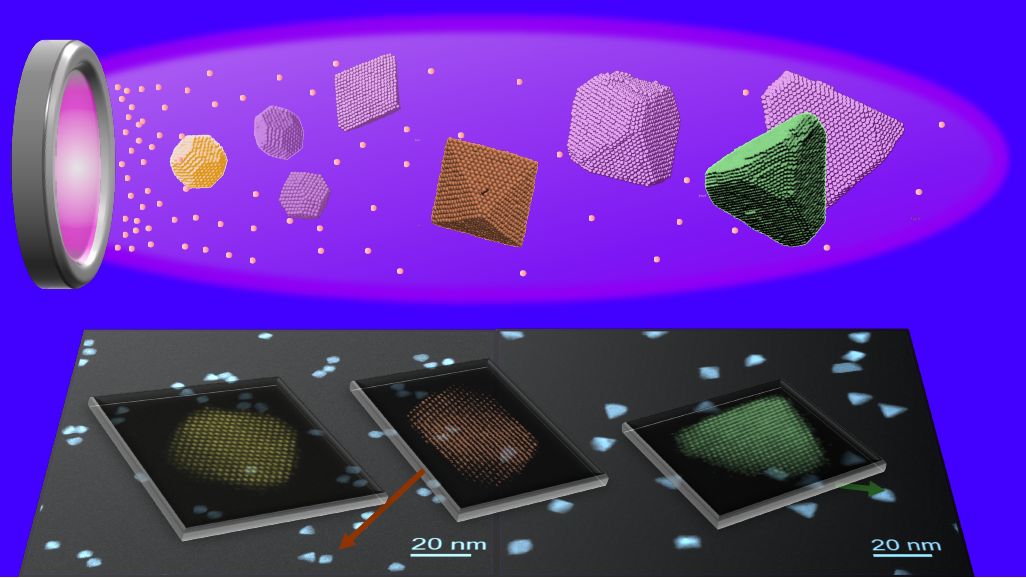 The riddle is now solved in an unexpected direction.  Dr Ziyou Li in Birmingham and her collaborators in University of York (JY) have always been interested in the atomic structure and shapes of gas phase generated size-selected nanoparticles by combining nanoparticle growth with detailed structural characterization by one-shot electron microscopy.  The gas phase nanoparticle synthesis is carried out in a magnetron sputtering machine and inert gas aggregation has been used to see nanoparticles with a broad distribution (Fig. 2).  Mass spectrometer is used to size-select the nanoparticles of a particular mass.  Such a device has usually been run to produce small size-selected nanoparticles by terminating the nanoparticle growth quickly in a finite gas aggregation chamber.  The resulting nanoparticles have been often found to adopt the equilibrium shaped nanoparticles (Nature 2008).  In 2019, Ziyou welcomed a young PhD research student, Xia Yu, from Southern  University of Science and Technology to the Birmingham group on a joint research program. They set out to explore the relationship between the structure of nanoparticles and the growth conditions systematically in Pt nanoparticles, well known for its excellent catalytic properties.  They discovered that under certain conditions, large nanoparticles can be grown and they are predominantly tetrahedral, a shape previously rarely observed in gas-synthesized nanoparticles from the same chamber.  Further analysis suggests that some of these tetrahedral nanoparticles must have evolved from the smaller octahedral nanoparticles.  Thus, the riddle is reproduced in the gas phase synthesis, but the solution is still elusive.  One thing in favor is that now the growth is taking place on bare surfaces and in vacuum, so the growth process should be simpler to understand as there is no need to consider solvents (as in wet-chemistry) and the surface science knowledge gained in vacuum can help.

Here the research group of Prof.  Riccardo Ferrando  at the Physics Department of Genoa University (Italy) comes to the rescue.  Diana Nelli, PhD student in this group, has been simulating ever larger and larger nanoparticles through molecular dynamics.  When their attention turned to Pt, they also discovered that you can grow octahedral nanoparticles into tetrahedral nanoparticles in silico.  Detailed analysis of the simulation results suggest that key to the symmetry breaking of 8 (111) surfaces of octahedral shape to the 4 (111) surface of tetrahedral lies in the presence of metastable mislocated overlayers (Fir. 3) and the line defects it generated. These mislocated overlayers are spontaneously nucleated in such a way that the growth process naturally selects the growing facets which lead to the symmetry breaking needed to transform an octahedron into a tetrahedron. 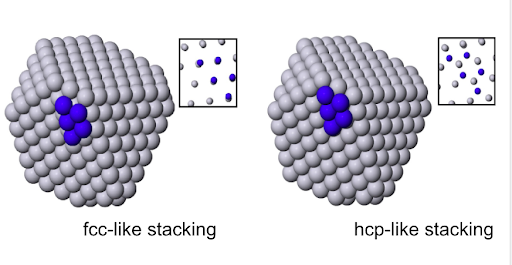 Figure 3  Overlayer seeds found in molecular simulation can have fcc-like (left) or hcp-like registration (right) with the atoms in the underlayer as shown in the inserts.

The tetrahedral nanoparticles can be considered to be kinetically trapped at room temperature, in the sense that evolution into equilibrium is inhibited by a kinetic barrier, just as graphite is stable against transformation into diamond at ambient conditions.  Kinetic trapping can be overcome by annealing, as demonstrated by real world experiments and simulations.  Both showed that particles of a given size eventually evolve towards more spherical shapes  when sufficiently heated.  This also gives us a clue that the limited diffusion is another key to the growth of non-equilibrium growth of tetrahedral from octahedral nanoparticles.

The significance of this work not only resolves a long-standing riddle in nanoparticle synthesis, but it also opens the ways to produce size-selected nanoparticles with a sense of shape control.  With good atomic scale understanding of the mechanism involved, the growth process can be rationally refined to produce monodispersed nanoparticles whose properties may be tunable not only by size, composition, but also by external shape.

The work described in this article is published in Nature Communication.  Unfortunately, one of the authors, Ziyou Li, passed away soon after the paper submission.  We want to dedicate this work to her.