Structural engineering at the nanoscale: behind the controlled growth and ordering of poorly-crystalline C-S-H nanosheets

Calcium-silicate-hydrate (C-S-H) is the binder of cement, and controlling its structure is vital to its properties. By borrowing concepts from structural engineering, we used graphene oxide to control the growth and optimize the assembly of C-S-H, substantially improving its strength and durability.

In our article ‘Controlled growth and ordering of poorly-crystalline calcium-silicate-hydrate nanosheets’ published in Communications Materials, we reported an interesting approach to master the intricate crystal growth of calcium-silicate-hydrate (C-S-H), the main binder of Portland cement. The key was controlling the intrinsic deformations of C-S-H nanosheets by borrowing a concept that is also applied in Portland cement materials, but at a completely different scale: in civil engineering structures.

In engineering terminology, deformation can be defined as the change in size or shape of a material by the application of a force (i.e. stress). In Portland cement concrete structures (e.g. buildings, bridges, tunnels, etc.), deformations are associated with forces, such as self-weight and external static and dynamic loads, acting upon them. Control of such structural deformations is achieved by designing elements with optimized geometry and a combination of different materials. For example, in one of the most common structural elements in modern construction, concrete beams and slabs are combined with steel bars in a geometric design that limits the maximum deflection of the elements to a small fraction of their span.

Recently, carbon fibre reinforced polymer (CFRP) laminates have been introduced as a solution to strengthen ‘weak’ or damaged structures with large deformations (i.e. deformations higher than the designed). The success of CFRP laminates as strengthening materials owes to their high Young’s modulus and tensile strength, excellent durability to the exposed environment. Besides, they are thin, flexible, and exhibit a strong bonding with the strengthened structures (via epoxy adhesive bonding). As a result, the CFRP laminates can significantly increase the flexural capacity of the structures with minimum material consumption.

Coming back to the nanoscale, according to the ‘sheet growth model’ of C–S–H proposed by Gartner, single-layer C–S–H nanosheets can be regarded as nanoscale slabs that undergo deformations as they grow (Figure 1a). Taking the CFRP in civil structures as inspiration, we thus hypothesized that a mechanically strong two-dimensional (2D) nanomaterial could function as an atomic-scale, strengthening material to increase the structural capacity of the C–S–H nanosheets and thereby restrict their nanoscale deformations during growth (Figure 1b).

In our manuscript, we demonstrated that graphene oxide (GO), a derivative of the graphene family, presents the ideal properties for an excellent nano-strengthening material for the C–S–H nanosheets. Firstly, GO is an atomically thin and atomically flat nanomaterial, possessing an ideal geometry that maximized its interaction with the 2D nanosheets of C–S–H. In addition, GO is flexible and exhibits excellent tensile strength and Young’s modulus, providing a high strengthening capacity with less material consumption. Most importantly, GO’s surface presents high content of oxygen functional groups, such as carboxylic acid (O-C=O), hydroxyl (C-OH), and epoxide (C-O-C). We observed via X-ray photoelectron spectroscopy that these functional groups acted as nucleation sites for the formation of C–S–H. Furthermore, they strongly coordinated with the calcium ions and gave rise to an interlayer bonding between the C–S–H and GO sheets, enabling the joint action between the strengthened and strengthening materials. According to our molecular and finite element method simulations, this strong bonding enabled effective stress transfer from C–S–H to GO when C–S–H’s nanoscale deformations occurred.

Observing the theory becoming reality was a thrilling part of the research. We experimentally validated whether our concept is applicable by observing the growth of C–S–H in solutions containing the GO ‘strengthening’ sheets. The transmission electron microscopy image (TEM) in Figure 2a,b exposes the difference of C–S–H nanosheets grown with and without the structural support of GO. It is clear that while the C–S–H nanosheet grown by itself is deformed (i.e., folded), the GO-strengthened C–S–H nanosheet had its 2D geometry well preserved.

To put our concept to test, we partially removed the functional groups of GO via an alkaline-thermal reduction method. By reducing the number of oxygen groups on the surface of GO, it would be expected that its nano-strengthening effect would be compromised due to the lack of bonds to restrain the deformation of the C–S–H ‘slabs’. And that is exactly what was observed in our experiments. Figure 2c shows the TEM image of a C–S–H nanosheet grown on the surface of reduced GO. In contrast to Figure 2b, out-of-plane deformations are observed, which indicated that the deformation processes of C–S–H nanosheet, although mitigated, could not be completely prevented.

Overall, our simulations and experimental results unveiled a route to rationally control the intricate growth process of C-S-H, which can be potentially exploited to nano-engineer C–S–H-based cementitious materials with significantly enhanced mechanical, durability, and functional properties. For example, in the same study, we also reported the fabrication of layer-by-layer GO–C–S–H composite prototypes with significant improvements in tensile strength, chemical resistance, and anti-cracking properties.

It will be interesting to see the future research exploring ways to scale up the GO-enabled control of C–S–H – towards a new generation of strong concrete structures that, due to the rational strengthening at the nanoscale, require much less steel or CFRP strengthening at the macro-level. 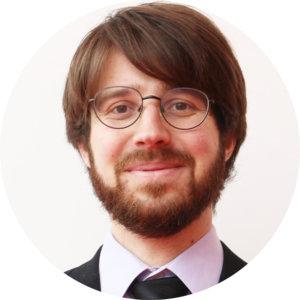