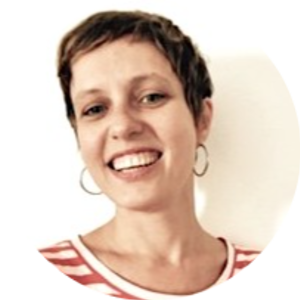 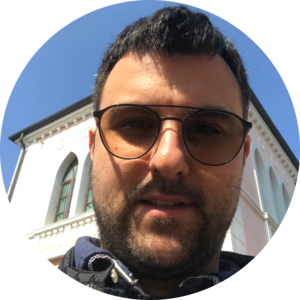 Since 2016 we dedicate considerable research efforts into the development of novel hole transporting materials (HTMs) which can improve the stability of lead-halide perovskite solar cells (PSCs) operating in ambient conditions, in order to define new perspectives for the future commercialization of this ultra-cheap photovoltaic technology. Among other HTMs, we have identified poly(3-hexylthiophene) (P3HT), a highly soluble and easy-to-process from solution semiconducting polymer, to be a good compromise for ensuring decent efficiencies to PSCs at relatively low-costs in comparison with the benchmark HTM based on the Spiro-OMeTAD small molecule. Spiro-OMeTAD indeed requires doping with LiTFSI and tert-butyl pyridine additives to be sufficiently active for hole transport and, in this regard, we have recently demonstrated an up-to-now unknown mechanism of de-doping induced by the latter additive, reported in a 2019 contribution in Chem. To boost the charge extraction/transport properties of P3HT-based HTMs, we previously employed a composite strategy, adding to the P3HT polymeric phase small amounts of nanocarbon fillers, namely single walled carbon nanotubes (with results described in a 2016 paper in Adv. Funct. Mater.) and functionalized reduced graphene oxide (reported in 2018 in Solar RRL). This type of composite HTMs is also beneficial for device stability, in that it increases the hydrophobicity of the layer (which is displaced on top of the PSC in standard device architectures), thus retarding the deleterious action of water molecules on the photoactive perovskite layer (water converts lead halide perovskites into the PbI2 precursor and de-activates the light harvesting semiconductor).

Following this direction of investigation, we looked for other possible nanomaterials to couple with P3HT for the development of even more efficient HTMs and stable PSCs. An inorganic species, copper thiocyanate (CuSCN), attracted our attention due to a series of relatively recent reports in literature on its excellent performance as HTM for PSCs. As anyway this material was previously used only in the form of a compact, relatively thick layer processed on top of the perovskite layer, we thought that for our purposes its production in the form of nano-fillers to be dispersed within the P3HT solution for processing was necessary. We thus resorted to hydrothermally synthesized CuSCN nanoplatelets of average lateral size around 600 nm and thickness 10 nm, in which the flat morphology favors the displacement in a thin layer such as that obtained by using P3HT. With this new composite HTM integrated within direct architecture PSCs, we run a stability test, storing the devices for almost one month into extremely critical conditions characterized by a relative humidity kept above 80% and measuring their power conversion efficiency (PCE) at regular intervals. From this test we obtained a series of data which largely attracted our attention as they did not only point out at a stabilization of the PCE but even at a certain improvement in time, particularly of its open circuit voltage (VOC) component. This rather unexpected (and somehow serendipitous) evidence prompted us at reasoning that the CuSCN@P3HT HTM should not have a mere passive role in blocking water molecules from penetrating the device but rather an “active” one, in that it might be able to transform them into something beneficial for the device performance (from this the expression we chose for the title above: “Turning bad into good”). By running a series of control experiments and characterizations on the devices and on the HTMs (endurance tests in humid vs dry, work function tracking in humid vs dry, three electrode voltammetric measurements) we proposed the existence of a water splitting mechanism happening within the HTM itself when expose to high water contents, that produces both hydrogen and oxygen molecules, with these last ones being able to in situ p-dope the P3HT layer and make it more conductive, thus improving the overall device PCE in time. The following scheme depicts the energetics of a PSC in which a similar water splitting active HTM is incorporated: in the device, parallel to the main photovoltaic mechanism ensuring conversion of light energy into electrical energy, a “parasitic” mechanism also takes place, which makes use of a very small part of the photocurrent to oxidizes water molecules to molecular oxygen (at the level of the composite HTM valence band, that is thus also the “anode”) and reduces them to molecular hydrogen (at the “cathode”, energetically coincident with the Fermi level of the dispersed CuSCN nanoplatelets). 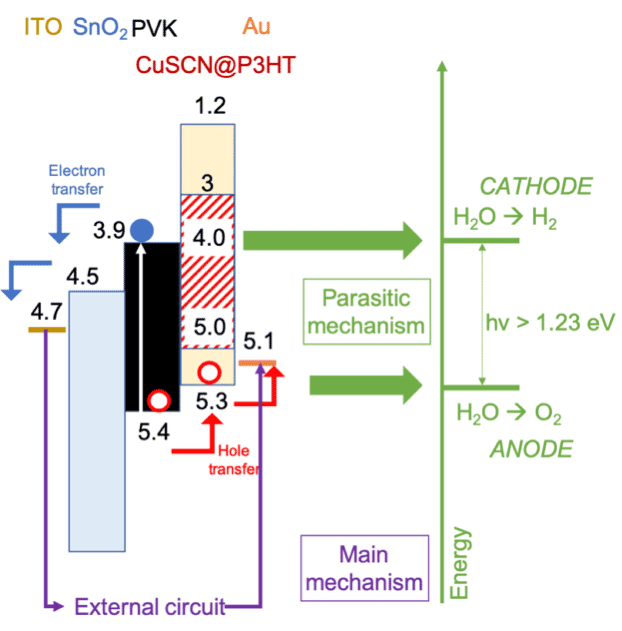 Unfortunately, due to the extremely low amount of hydrogen produced within our PSCs (VOC and materials combination are not yet optimized to ensure higher currents that can sustain the production of detectable amounts of this gas) we have not been able to provide a direct proof of the actual occurrence of a similar mechanism within the operating photovoltaic devices. However, the hypothesis that we present in our Communications Materials paper opens up very interesting perspectives not only for the stabilization of PSCs through an active process that splits undesired water molecules before they reach the photoactive layer and convert them into a beneficial p-dopant (O2) for a semiconducting polymer HTM. It also paves the way to the future development of low-cost hybrid photovoltaic/photoelectrochemical architectures in which light energy is converted both into electricity for direct use and into a sustainable solar fuel such as hydrogen, that can be stored for a later exploitation.