Existing gas detection solutions often are the result of trade-offs between instrument performance and its power and size. Traditional analytical instruments could be inconvenient and costly, even in portable configurations with the reduced carrier gas, vacuum, and power demands, but are an unavoidable alternative over existing gas sensors. As scientists and engineers, my team is asking “How to change the status quo?” and we are providing the solutions.

Conventional wisdom would suggest that any gas sensor that fits on a penny could not possibly outperform a big analytical instrument.  However, this wisdom is based on certain learnings and assumptions about the mathematical principles and design rules of operation of these devices. Gas sensors normally provide only a single output (resistance, light intensity, etc.) while traditional analytical instruments have  one or more types of independent variables in their response, e.g. retention time in gas chromatography instruments (Fig. 1a, b). In these and other systems, independent variables (outputs) allow identification of different gases and rejection of interferents (Fig. 1c). However, miniaturization of such traditional systems is reaching a plateau based on laws of physics and laws of electronics.

The cover story in May issue of Nature Electronics (https://rdcu.be/b35YH) presents a detailed report by my team on boosting performance of the most popular gas sensors – semiconducting metal oxide (SMOX) chemiresistors. Our simple excitation scheme based on contemporary electronics brought highly desired features such as linear sensor response (R^2 > 0.99), dynamic range of six decades of gas concentrations, 50-fold improvement in the limit of detection, and cancelled effects from ambient temperature over - 25 to 50 oC. We lab-tested our excitation scheme with numerous volatiles (benzene, formaldehyde, hydrogen sulfide, hydrogen, carbon monoxide, methane, ethane, propane, etc.) and did field validations in wireless sensor network, drone-based, and wearable formats. The core of our technical approach is the dielectric excitation principle in the sensor design and formation of independent spectral variables in sensor response to deliver sensor performance to compete with traditional analytical instruments (Fig. 1c) but with reduced size and power (Fig. 1d-g). Our solution allows previously unachievable deployments because it its extreme miniaturization.

I was frustrated with my attempts to improve performance of conventional gas sensors. But graduate school advisor Prof. Gary Hieftje, used to say “a day in the library saves a year in the lab.” With this inspiration, my team and I studied and understood the foundations of existing sensor designs and other analytical instruments and combined this knowledge with the experimental results from our own laboratory and field validation trials as well as from simulations.

Reflecting on unexpected discoveries reported in our article in May issue of Nature Electronics, I would like to share the phases of our journey – learning, refining, and optimizing our dielectric excitation scheme as well as learning from end-users about their critical pain points. Our extensive results in pristine lab conditions and environmental chambers were intriguing but initially puzzling since decades of prior work with AC excitation (a.k.a. impedance spectroscopy) of SMOX sensing materials did not even hint at the characteristics we observed.  Then we moved to early outdoor tests (Fig. 2a) for initial detection of dynamic gas plumes.  Our system enhancements allowed us to detect gas leaks as far as 700 ft (i.e. 213 meters) away (see Fig. 2b depicting a small celebration).  Working with our partners, we conducted numerous field validation tests (Fig. 2 c-e) that have proven the field applicability of the developed sensor solutions.  Our work is expanding into wearable (Fig. 2f-h) and drone-integrated (Fig. 1f,g) sensor solutions. We are industrial scientists (Fig. 2i,j) and we are exploring commercialization opportunities with prospective partners for diverse markets.

Looking ahead, I am asked if we could recognize 5 – 10 volatiles with such sensors?  What about 20 – 50 volatiles? Can we reject ambient interferences to allow detection of parts-per-billion and parts-per-trillion levels of volatiles of interest in ambient air?  To answer these and other challenging questions, we are building new collaborations to come with new solutions. 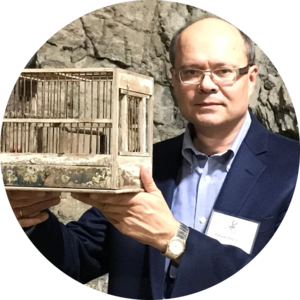